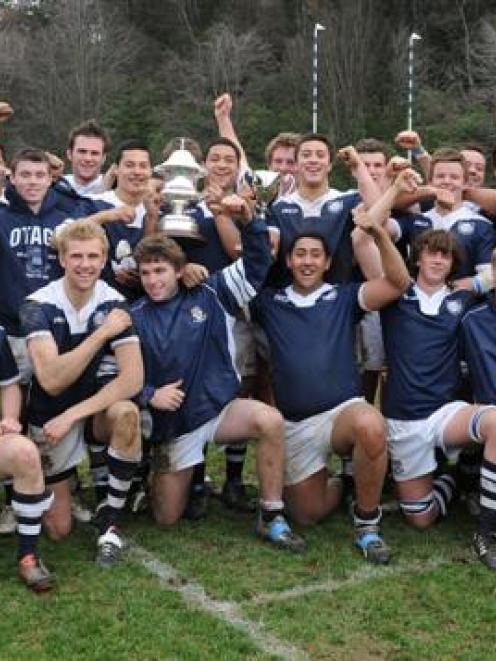 Otago Boys' was unbeaten after 11 rounds of the competition and won the Otago Daily Times Cup for being the winner of the first round.

The competition now splits into top four, middle four and bottom four, with teams playing others in their section.

Southland Boys' was in second spot because of its better differential - 293 points compared with Waitaki Boys' 205.

Otago Boys' was on fire from the start and scored 14 tries, with winger Corey Miller and midfield back Josh Casey both scoring two.

Morris has been in scoring mood this winter and has bagged 31 tries.

He also directed play efficiently and made space for his outsides to also score tries.

The other player of note was lock Brendan Murdoch, who was mobile with the ball and rugged on defence.

In the Highlanders First XV competition, the dominant Otago Boys' side has scored 875 points and conceded only 49.

Waitaki Boys' is the team that has improved most this season and it proved it on Saturday by scoring nine tries when it beat Gore 57-17 in Oamaru.

It is the first time St Kevin's has reached the middle four in the four years of the Highlanders competition.

It cemented its position with a hard-fought 29-26 win over John McGlashan College in Oamaru on Saturday.

McGlashan led 14-8 at the break but St Kevin's came back strongly in the second spell to snatch the win.

Dunstan cemented its spot in the middle four with an impressive 35-12 win over South Otago in Alexandra.

The rugged Dunstan pack got on top of South Otago and then the ball was moved wide to its fleet-footed backline.

In the other game on Saturday, Southland Boys' beat James Hargest 58-3.