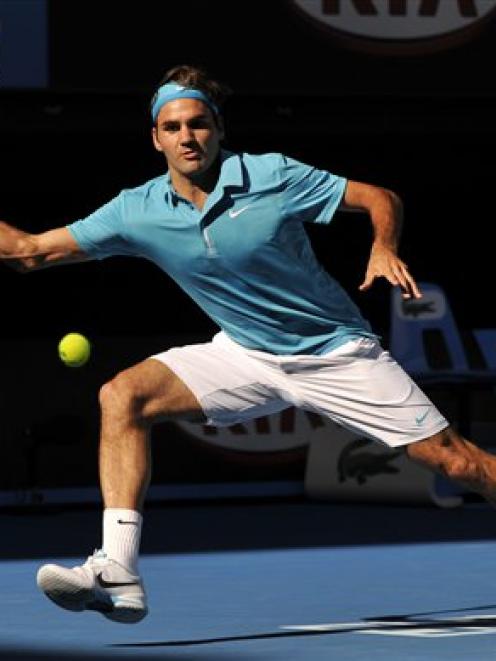 Roger Federer of Switzerland returns to Nikolay Davydenko of Russia in their Men's singles quarterfinal match at the Australian Open tennis championship in Melbourne, Australia, Wednesday January 27, 2010. Photo by AP.
The only three men to beat Roger Federer in the last 19 majors were already out of the Australian Open, leaving the Swiss star with a new threat to face.

Nikolay Davydenko's 13-match winning streak was the hottest on the tour and included two wins over Federer during title runs at the season-ending ATP championships in November and the season-opening event at Doha this month. The Russian unloaded everything he had on Federer for a set and a half on Wednesday and was suddenly in uncharted territory at a Grand Slam tournament.

"Winning that many games in a row against a player that's been on fire like this, it's a great sign," Federer said.

The win stretched his record to a 23rd consecutive Grand Slam semifinal appearance, something he rated as "definitely one of the most incredible things I have in my resume."

Before Federer, Ivan Lendl and Rod Laver shared the record at 10.

"It's incredible looking back on how many years that is now, you know, I'm able to deliver at Grand Slam play, especially this year," he said. "Looking at the draw with (former No. 1-ranked Lleyton) Hewitt in the fourth round and Davydenko in the quarters, who has been on fire the last weeks and even today, you know, we saw big signs of it. "So for some reason I was just a bit worried I was not going to make it this time in the semis. Now obviously that it's safe again and I've been able to add one. It's amazing."

Besides his incredible run of Grand Slam semifinals that began at Wimbledon in 2004, Federer boasts three Australian Open wins among his record 15 major titles and 50 wins or more at three of the four biggest tournaments in tennis.

In Friday's semifinals, Federer will meet Jo-Wilfried Tsonga, who removed Djokovic in a five-setter on Wednesday.

To beat Federer, Davydenko said, you have to be like the Swiss star.

Davydenko had lost 12 matches to Federer before gaining some confidence with his back-to-back wins. He broke Federer's serve in the third and fifth games, and didn't give the Swiss even a glimpse at a break-point chance.

Federer decided to take a quick comfort break after the first set, to let the sun that had been bothering him move a little bit. That gave Davydenko time to cool his heels inside Rod Laver Arena - unfamiliar territory for somebody more familiar with the outside courts - and time to think about the situation.

It didn't work right away, Federer dropped serve three games later and then fell behind 3-1, but then the momentum swung dramatically.

"You're allowed to have two toilet breaks and I never use them, and I figured maybe the sun goes by 1 centimeter to 3 centimeters ... maybe it's that one point that makes a difference," Federer said, adding for the record: "Oh, I had to go to the toilet, too."
AP
Comment now