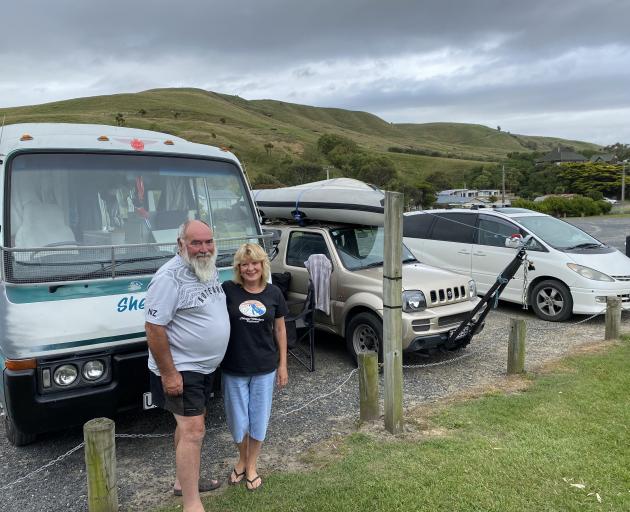 Kiwi freedom campers Allan and Cathy Luchford, of Christchurch, at Ocean View freedom camping site in January. PHOTO: STAR FILES
Despite occasional issues with high numbers of freedom campers in the past, local community board chairmen are broadly supportive of the practice.

This month, Minister of Tourism Stuart Nash released proposed new rules for freedom camping, with the aim of protecting the environment, removing unfair burdens on some destinations, and lifting the quality of tourism.

‘‘The most consistent complaints I hear about the tourism sector relate to abuse of the freedom camping rules,’’ Mr Nash said.

‘‘A sub-group of visitors is spoiling the experience for more responsible campers and for locals who are left to clean up the mess.’’

Freedom camping in self-contained vehicles had a place for New Zealanders and international visitors, but change was needed where vehicles were not self-contained, Mr Nash said.

Mr Weatherall was generally supportive of strengthening the rules in order to help avoid ‘‘people sleeping in cars and getting around the bylaw’’.

‘‘We prefer people to be tidy and look after the facilities,’’ he said.

He acknowledged that things had been going well, with reduced numbers of visitors overall.

‘‘We are certainly seeing the same numbers of campers at Ocean View Reserve — it has gone pretty much as it would normally.’’

The volume of vehicles was down at Brighton Domain, and also in lay-bys along Brighton Rd.

Mr Morrison said freedom camping at Warrington had caused issues in the early days, after it started in 2014-15, but board members had worked hard with the Dunedin City Council parks department to improve the situation.

After the toilet block had been renewed, Portaloos installed, and the waste collection upgraded to an efficient ‘‘big belly’’ bin, ‘‘the problems went away’’, Mr Morrison said.

‘‘It demonstrates that if you put infrastructure in place, the problems go away.’’

Mr Morrison cautioned against bringing in rules that were too harsh, saying he thought many of the young people travelling in non self-contained vehicles were fruit pickers.

‘‘In later years, when they are older and have more resources, they may come back, stay in hotels, and spend money,’’ he said.