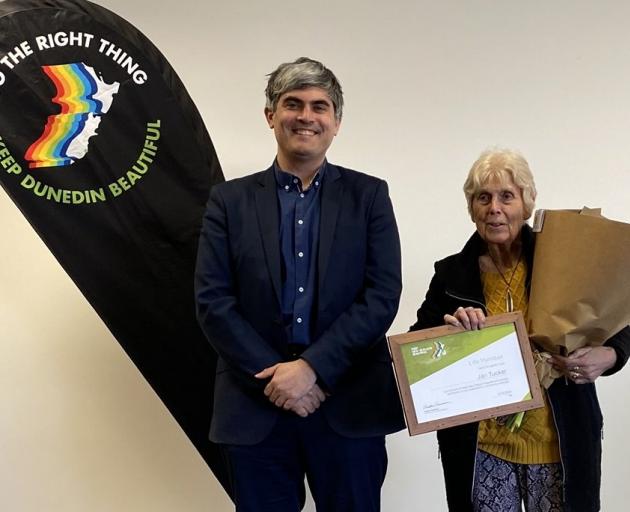 "It was lovely to receive the life membership — I don’t know how, but they managed to keep it a secret from me right up until the awards ceremony," she said.

"I really enjoy being involved in the work of Keep Dunedin Beautiful, and all its connections to the community — it’s why I have stayed involved for so long."

Mrs Tucker, who joined the Keep Dunedin Beautiful committee in 1998 as a community board representative, has also flown the flag for Dunedin on the national board for the past 14 years.

At last month’s Keep Dunedin Beautiful annual meeting, she was re-elected as chairwoman.

During more than 20 years in the role, Mrs Tucker has worked with five different Keep Dunedin Beautiful co-ordinators, and the organisation has evolved over time.

"The amount of community involvement in the organisation has grown, as has the list of companies — it has been an interesting journey," she said.

"Keep Dunedin Beautiful has also developed bonds with the Otago University Students Association as well — it’s great to see young people out and caring for our city."

Schools were also involved through the Enviroschools programme, and Dunedin City Council had been a strong supporter — particularly in relation to Taskforce Green, which was a very important partner, she said.

Over the years, some things had not been able to continue — such as hanging flower baskets in the central city, and a theatre group that toured schools, but the funding had dried up for these initiatives.

"I was sorry that we had to drop those programmes, but there have been other things that have helped to make up for it," Mrs Tucker said.

Mrs Tucker described the current co-ordinator Allison Wallace as a "dynamic young woman", who worked tremendously hard for the city.

The most recent Keep Dunedin Beautiful event, in conjunction with Rotary Dunedin, was the Trees for Families planting day, in which families gathered at the West Harbour cycleway-walkway to plant about 60 trees.

"That was a hugely successful event," she said.

In the coming months, the organisation would concentrate on planning for murals around the city, and would look towards Orientation Week in the new year.