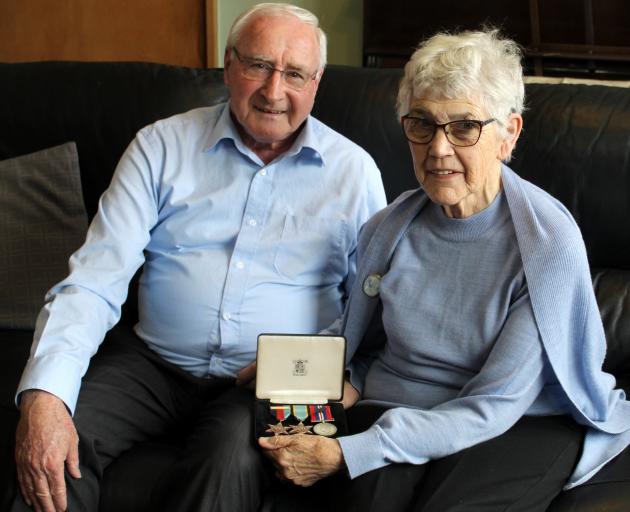 The medals have not been in the family for more than 25 years but thanks to the efforts of retired New Zealand Army Major Ian Martyn, of Nelson, they are back where they belong.

Mrs Hanning’s 82nd birthday was on October 6, so it was like a birthday wish come true for her when her uncle Herb’s medals arrived in the post, she said.

She was very grateful for the effort that Mr Martyn put into reuniting her uncle Herb’s medals with family.

Flight Lieutenant Herbert Douglas Newman, known to his family as Herb, was born in Temuka in 1918, and attended school in Timaru.

Research by Mr Martyn showed  he trained as a pilot in the Royal New Zealand Air Force at Wigram in Christchurch in 1939.

By December 1940 he was a pilot in command of a bombing mission on the marshalling yards at Hamm, Germany. 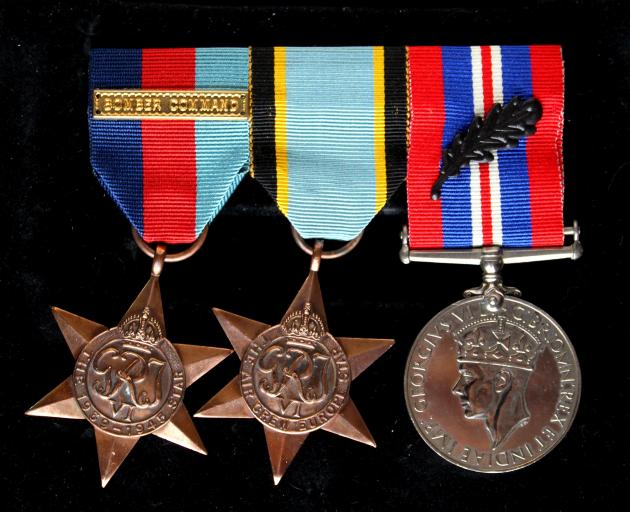 Herb Newman's medals (from left) are The 1939-1945 Star with Bomber Command clasp, the Air Crew Europe Star and The War Medal 1939–1945 with oak leaf device. PHOTO: SIMON HENDERSON
On the return leg the aircraft crash-landed after encountering unexpectedly strong headwinds.

The crew were captured and became prisoners of war. 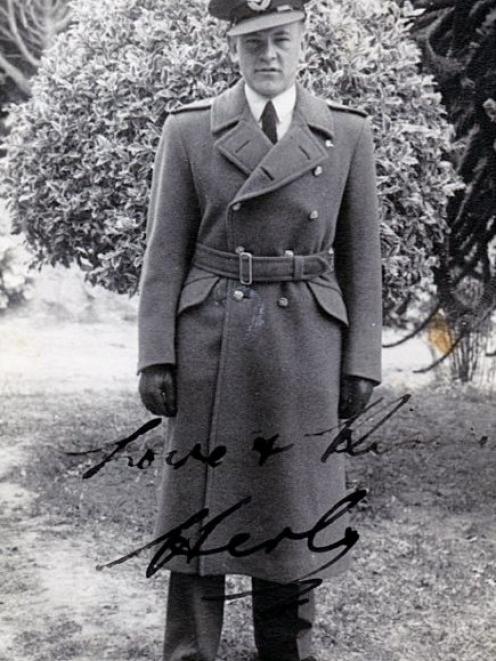 A photo of Herb Newman in his uniform taken about 1939/40 at the family home in Timaru.PHOTO: SUPPLIED
Brickhill even described Fl Lt Newman in the book. In one chapter his ‘‘bulky shape’’ was described lying in a tunnel as a shot was heard and the prisoners realised a guard had found the tunnel exit, and they feared he was shooting prisoners as they exited.

Fl Lt  Newman was still attempting to escape before realising a fellow prisoner was frantically signalling him to turn back, saving his life.

Finally liberated on May 2, uncle Herb was flown to the UK and was in London to celebrate Victory in Europe Day on May 8, 1945.

He stayed in the UK, marrying Peggy Titcomb, and continued in service at the Royal Air Force until retirement.

Before the Newmans left their home in Norfolk to move into a rest-home, the medals were given to their  neighbour Mary Senior.

Mr Newman died in 1996, and his wife Peggy died the following year.

When Mary died her brother James Clayton inherited the medals.

Mr Clayton had been custodian of the medals for about  a quarter of a century and made a number of efforts  to try to get the medals returned to a descendant family member.

Finally, aged 85,  he made a last ditch effort to contact uncle Herb’s descendants, posting  on the New Zealand Returned Services Association Facebook page and magazine asking if anyone knew a descendant of Herbert Douglas Newman. 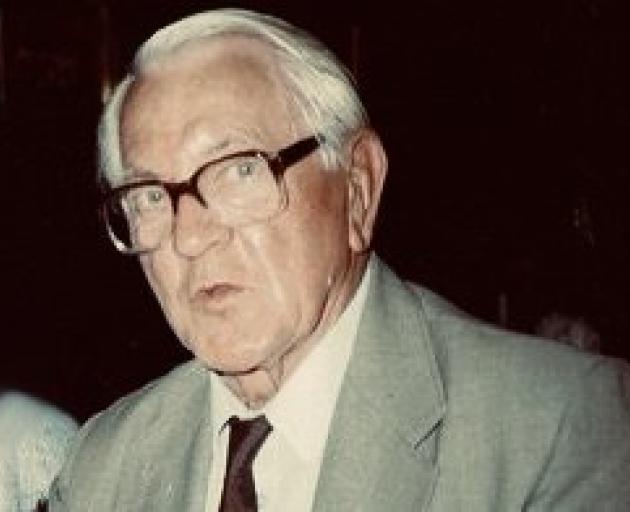 A photo of Herb Newman taken in February 1990 during a visit to New Zealand for the first time in 45 years after living overseas. PHOTO: SUPPLIED
Mr Martyn came across the messages in June this year. He is the founder of not-for- profit Medals Reunited New Zealand, a voluntary service dedicated to reuniting military medals with families.

Mr Martyn decided to take up the case and find Mr Newman’s family.

He was able to track down Herb’s oldest living niece, Genevieve Hanning (neeNewman), of Green Island.

Mrs Hanning said she remembered her uncle Herb as a child, as the family anxiously waited to hear news from the war from their home in Timaru. ‘‘He was missing for a long time... they were always scared that somebody would come in with a telegram [to say he had been killed].

‘‘I would have been a pre- schooler but I remember vividly going to Nana’s and we were making parcels for the prisoners of war.’’

Everything went in a big tin, sometimes a kerosene tin cut in half or a biscuit tin.

‘‘Granny made the Christmas cake, Nana used to knit, I could remember knitting socks, they sent all sorts of things.’’

Mrs Hanning remembered  the war years  and the sadness of her family when news came of the loss of her uncle Pat as a Spitfire pilot.