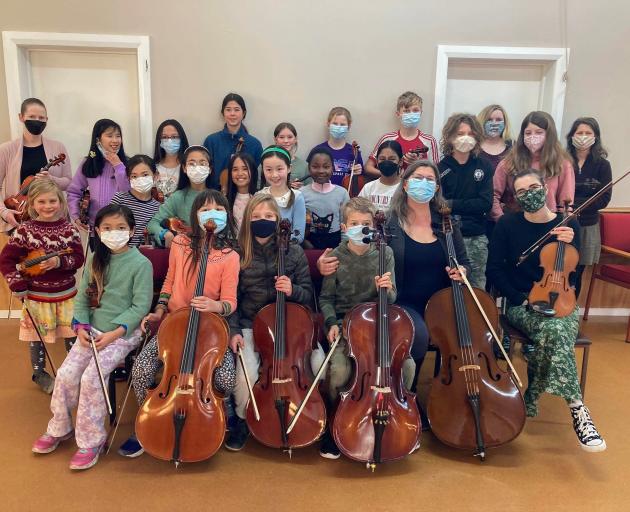 A large contingent of pupils of Dunedin music teacher Ella George, ranging in age from 6 years to adults, will join the Dunedin Symphony Orchestra on stage at Dunedin Town Hall for its Mozart’s Monster Mash concert on Saturday. PHOTOS: SUPPLIED
A remarkable 26 pupils of Dunedin music teacher Ella George will perform on stage with the Dunedin Symphony Orchestra this Saturday night in its giant community concert Mozart’s Monster Mash.

The concert at 7pm in Dunedin Town Hall will feature the DSO and City Choir Dunedin, who will be joined by musicians and singers of all ages and skill levels, under the baton of conductor Peter Adams. 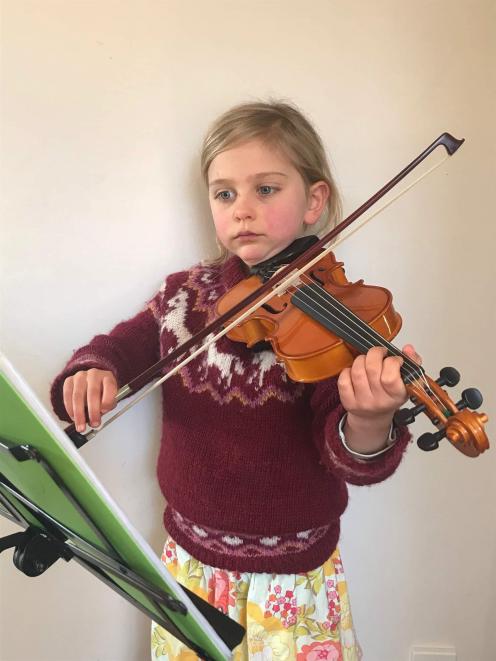 Six year-old violinist Charis Lehr, a pupil of Ella George, practices at home ahead of Saturday’s concert, where she will be the youngest person on stage.
Handel’s glorious Hallelujah Chorus, from Messiah, and popular tune Monster Mash will be thrown in for good measure.

Ms George, who teaches violin, viola and cello using the Suzuki method, said her pupils were very excited to be taking part of the concert, and would be performing simplified versions of five pieces — three Mozart works, the Hallelujah Chorus, and the Monster Mash.

"It’s great that there are less complex versions of these pieces for the less-experienced players — it makes it possible for everyone to take part," she said.

The youngest of Ms George’s pupils to take part in the concert is six year-old violinist Charis Lehr, , who is thrilled to have the chance to play alongside her mother and brother in the concert.

The Mei sisters, Isabelle (7), Tiffany (9), Olivia (10), are also making the most of the opportunity to perform, and Ms George herself will play in the cello section.

Ms George’s pupils are practising at home, as well as having some group rehearsals ahead of the concert, and were looking forward to the experience.

"From taking part in the Beethoven Big Bash last year, I know that my pupils will only really understand the experience once they get to the town hall and join the orchestra — then they will be very excited," she said.

"It is very impactful playing music in a big group — this will be a wonderful thing for them." 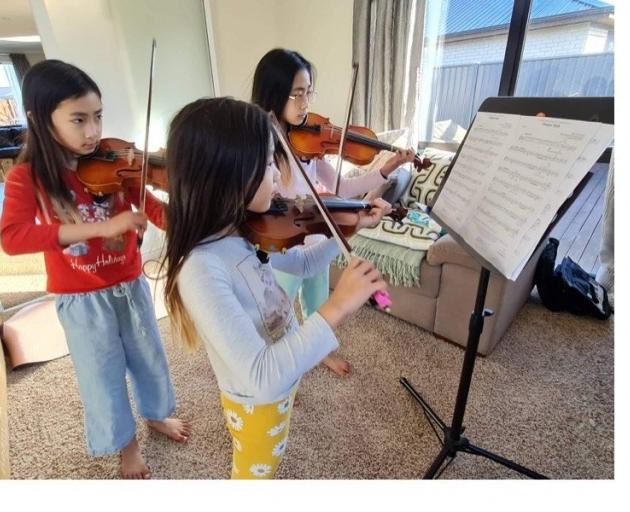 Dunedin sisters (from left) Tiffany (9), Isabelle (7), and Olivia Mei (10), all pupils of Ella George, prepare at home for the concert.

Along with community players and singers, the concert will feature performances by three University of Otago Music students, all appearing as soloists with Dunedin Symphony Orchestra for the first time.

Skyla Murray will perform as soloist in Mozart’s Adagio for Violin and Orchestra, Cameron Monteath will play the first movement from Mozart’s Piano Concerto No. 16, and soprano Rhiannon Cooper will sing Per pieta, ben mio, perdona from Mozart’s opera Cosi fan tutte.