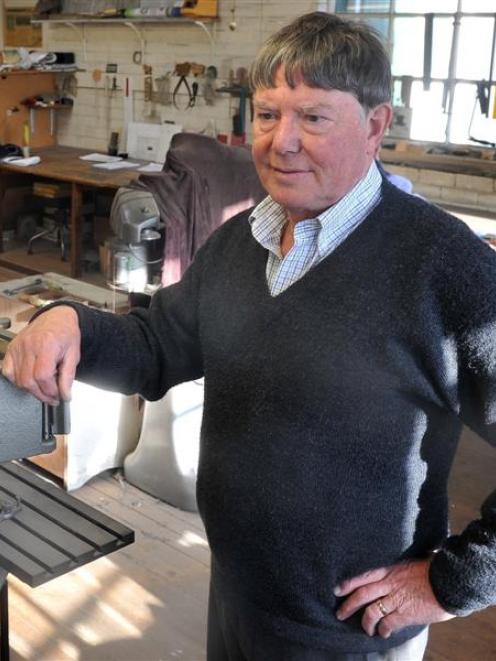 John Swan and Co managing director Brian Swan represents the third generation of his family at the helm of the long-established Dunedin engraving business. Photo by Craig Baxter.
When Brian Swan left school in 1962, there was no doubt what he wanted to do for a career.

He joined the long-established Dunedin family engraving business, John Swan and Company Ltd, where he continues to work, although he is now managing director rather than an apprentice.

One of Otago's oldest businesses, John Swan and Co has been under the management of the Swan family since 1889 but dates back to 1878 when it was established by Samuel Reading.

Brian Swan, grandson of the company's namesake, believed the secret to its longevity was keeping up with technology - which had changed dramatically from the early days of hand-engraving - and having dedicated staff.

Samuel Reading, to whom John Swan was apprenticed, sold the business to G. H. Marsden in 1884, and it was sold five years later to Robert Swan, trading as John Swan and Co, which encompassed his two sons, John and James. James Swan opened a branch in Auckland in the early 1900s.

In the 1890s, the Swans invented and manufactured the Swanholm engine, which could be run by gas or oil and was used to power machinery before the widespread use of electricity.

John Swan worked for the firm until 1950, two years before his death, when he was succeeded by his son, also John.

Brian Swan, now 68, took over management from his father in the mid-1970s. All three generations had worked in the business for more than 50 years. Sadly, Brian's son Brendon, who also joined the business after leaving school, died four years ago.

The business has always been based in Bath St, in the central city. In 1974, it expanded into an adjacent building and, in 1997, there was a further expansion, with the office and showroom moving to a frontage on Moray Pl, while retaining the original factory.

It now employs six staff, including Mr Swan, and while he can recall the days when 12 staff were employed, technology meant half that number were now putting through more work.

The ''computer age'' meant massive changes to the business which had two laser machines, along with computerised engraving milling machines. Manual engraving machines were still used for some fine work ''because some jobs need that human element'', Mr Swan said.

Even after five decades in the business, he has never tired of the work and usually arrives between 7.30am and 7.45am, not leaving until after 5pm.

Every job was different - ''it's not boring'' - with customers all requiring different sizes, shapes, colours or text. The work was wide-ranging, from the bronze plaques for the Writers Walk and Olympic Walk in the Octagon to providing name badges for the country's major banks and making rubber stamps.

Modern technology enabled a wide range of materials to be engraved. Engraving trophies remained a major part of the business and while some clubs were cutting back on the number of trophies used, because of costs, there were ''more and more clubs and societies around''.

The firm also stock a range of trophies, plaques and giftware suitable for engraving, mostly imported.

While acknowledging it was an achievement to reach 135 years, Mr Swan said it was ''really just another year''. There had been a small downturn in the past few years but business had picked up again and Swan's was ''trading very well''.

The biggest challenge was ''just making sure the work gets out on time'' as customers wanted it ''now'', he said.

Mr Swan believes when the time comes for him to retire, there will be ''somebody there who will take over''. In the meantime, he still enjoys the Otago lifestyle. Aviation is a passion.

He has a pilot's licence and has flown to Australia and back a few times.

Mr Swan's father was a keen motorcyclist. Brian still has one of his motorcycles, dating back to the late 1940s, which he sometimes takes out for a ride