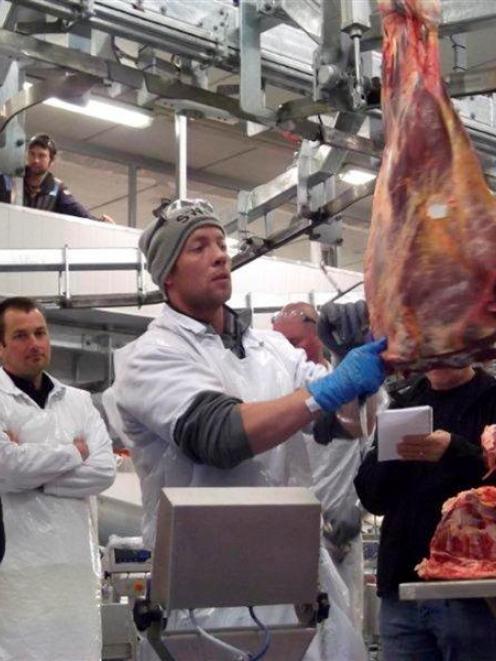 The upgrade has increased the plant's capacity from 34 animals an hour to 75 and includes installation of the latest technology in beef processing, which will improve yield and productivity.

Large numbers of cattle are transported out of Southland annually for processing and it is hoped to capture some of those numbers.

Beef production from Alliance's Sockburn plant, in Christchurch, will be transferred to the Mataura and Pukeuri plants when Sockburn closes at the end of the 2012 season. 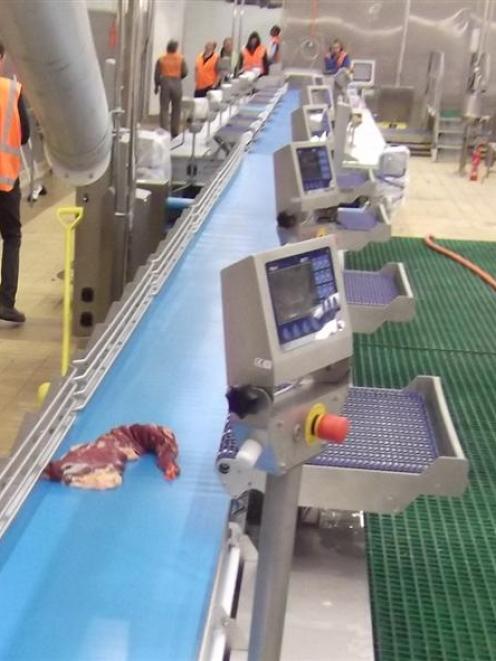 The first piece of meat goes down the line during commissioning of the Mataura plant's $15 million beef processing upgrade. Photo by Alliance Group.
The upgrade has helped secure the future of the plant which is the largest employer in Eastern Southland, with about 800 process workers at the peak of the season.

The freezing works has been on the same site, in the centre of the town, since 1893 and the beef house was built in 1972.

Plant manager Tony Gilder, who has worked at the plant for about 35 years, acknowledged the district would struggle without it.

"It wouldn't be a nice area to live in, with this place not operating," he said.

Mr Gilder was born and bred in Mataura and has worked his way up the ladder. He started at the plant as a labourer and took over as plant manager five and a-half years ago.

His knowledge of the various departments was an advantage which gave him a good understanding of how the business operated, he said.

The new technology - described by Mr Gilder as "a fancy bit of kit" - allowed the company to identify the yield on every cut of meat through the process.

It came from multinational company Marel, a global provider of equipment, systems and services to the meat, fish and poultry industries.

It has more than 3700 employees worldwide, with business units in the Netherlands, Denmark, the United States, Iceland, Slovakia and Singapore.

The work, which coincided with the processing plant's shut-down period, went well and the new system began running several weeks ago. Although there were always issues with new developments, Mr Gilder said things were going "better than expected", considering it was still in the teething period.

Milmeq recently received the top award in the mechanical and manufacturing category of the New Zealand Engineering Excellence Awards.