High-tech tools in the fight against crime 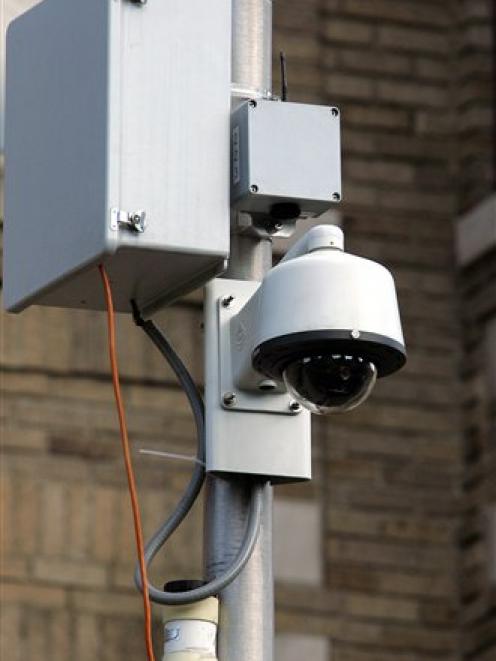 A small gunshot sensor, with an antenna (top right) can be seen mounted on a pole just above a camera in East Orange, New Jersey. The gunshot sensor triggers the camera via the control box at left. The city is combining these systems with sensors that can be programmed to identify crimes in progress. Photo by AP.
East Orange has fought one of the highest crime rates in the US in recent years with an arsenal of high-tech gadgets, from gunshot detection systems to software that can sift and analyse crime data almost instantaneously.


The results have been startling: violent crime in this town of 65,000 has fallen by more than two-thirds since 2003, according to state police statistics.

Yet even with its crime rate plummeting, the city is going a step further by becoming the first in the country to combine those systems with sensors, sometimes called "smart cameras," that can be programmed to identify crimes as they unfold.

Doubters, meanwhile, question whether the effect on crime justifies the price tag.

Crime in East Orange had dropped off after the crack epidemic of the 1980s and 90s but then rose dramatically in the early 2000s as gangs began to put down roots.

A firm believer in the power of technology, Cordero said he developed a database in his spare time so the department could track and analyse crime data instead of waiting for paper reports to be collated.

Other upgrades followed, among them a wireless computer system for all patrol cars; video surveillance cameras in high-crime areas; a virtual community patrol system for residents to report crimes via text message; a grid showing patrol cars' locations; and a gunshot detection system that tracks the source of shootings.

The entire network has cost $US1.4 million ($NZ1.97 million), of which $US1.1 million came from grants and forfeiture funds, according to Cordero.

"We knew what the city had been doing for 20 years and we knew what had worked and what hadn't worked," Cordero said.

"There was a community resolve that things could change, and should change."

The sensors, which work in concert with surveillance cameras, are designed to spot potential crimes by recognizing specific behaviour - someone raising fist at another person, for example, or a car slowing down as it nears a man walking on a deserted street late at night.

Each new crime recorded is entered into the database.

"They know what is normal behaviour," said Tarik Hammadou, whose Australian company, Digisensory Technologies, makes the sensors. "And when there is abnormal behaviour like an assault, we annotate it and say to the sensor 'this is an assault', so the sensor will always remember the pattern."

When the sensor raises an alert, an officer sitting in the department's nerve centre can zoom in on images to see if a crime is in progress.

A computer program sends the information to a laptop in the patrol car nearest to the scene. The whole process takes seconds.

"We can almost be in two places at the same time," said detective Reginald Hudson, a 17-year veteran. "I can sit here and watch the cameras in another location and maintain a presence right here."

Hammadou said the sensors aren't in regular use by law enforcement agencies beyond East Orange. Consequently, there is little research available on their efficiency.

That hasn't deterred sceptics from weighing in.

Dennis Kenney, a professor of criminal justice at New York's John Jay College of Criminal Justice, said the sensors can pick up so many innocuous actions - someone lining up behind an ATM user, for instance - that the system could be overloaded.

"You'd be constantly watching every ATM because you'll have so many false positives," he said.

"Then to make up for it you would have to screen out so many things, and that defeats the purpose. It's a novel idea, but the technology just doesn't support it."

While sensors like the ones used in East Orange will speed response time, "there's little evidence that increasing the rate of information going to the cars will make a big difference unless the cars are driving faster," said Peter Scharf, a public health professor at Tulane University in New Orleans.

He co-authored a study of gunshot detection systems used in the Virginia cities of Hampton and Newport News.

Nevertheless, Scharf cites the case of DC snipers John Allen Muhammad and Lee Boyd Malvo as an example of how sensors could have taken existing pieces of information - the description of a car, a pattern of behavior, a type of weapon - and alerted law enforcement to a shooting about to happen.

"You would have had them dead to rights," he said.

A pursuing officer's report of a stolen Jeep automatically activated a "virtual perimeter" of cameras trained on the area, providing other patrol cars information they used to apprehend the suspect soon after.

Privacy rights advocates have criticised the increasing use of surveillance cameras in urban areas.

In New Jersey, the American Civil Liberties Union consulted with Newark when the city began installing traditional surveillance cameras two years ago, and is keeping an eye on developments in East Orange.

Cordero said publicity about his department's technological advances has had the dual effect of making residents feel safer while letting criminals know they're being watched.

"The value of technology is not the might it brings to law enforcement, though that's important," he said.

"If we continue to influence the criminal mindset, I think it will balance out."