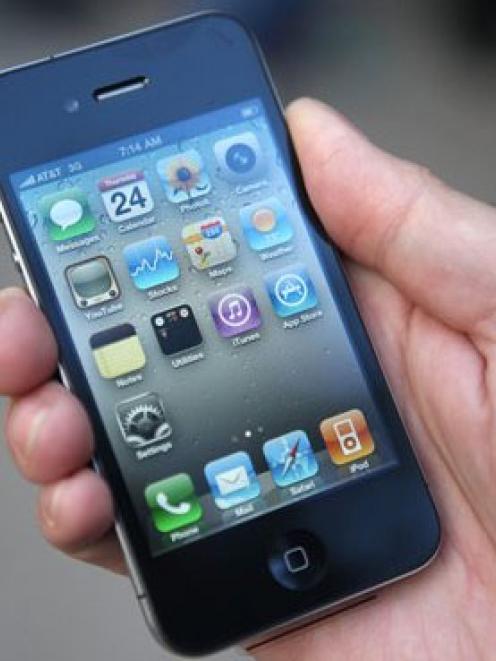 Apple's iPhone 4. Photo by AP.
Ever wondered why your iPhone had patchy service even though it showed the signal bars at full strength? Apple has an answer for you - and it's not a defective antenna.

The company has admitted that its iPhones have been inflating signal strengths and masking poor reception.

Apple revealed the embarrassing flaw, which it said has been a problem since the original iPhone was launched three years ago, as it was addressing an uproar over dropped signals on its new iPhone 4, which came out last week.

"Upon investigation, we were stunned to find that the formula we use to calculate how many bars of signal strength to display is totally wrong," Apple said in an open letter to its iPhone users.

In many cases, the phones displayed two more bars than they should have, so those whose handsets showed a large drop in bars actually had a weak signal to begin with, Apple said.

"I'm still in awe that it took them four generations (of iPhones) to figure this out," said Tina Teng, an analyst at iSuppli. "They're not giving consumers a satisfactory answer. It still goes back to how you hold it."

Shortly after the Cupertino, California, company began selling the iPhone 4 on June 24, some users complained that the signal bars on the device dropped four or five bars when it was held a certain way.

Apple said the signal issue occurred only if the hand "covers the black strip in the lower left corner of the metal band," raising the possibility that the problem was with the antenna that is embedded in the phones' frame.

Citing the potential antenna problem, a law firm that claimed to be speaking on behalf of iPhone users filed a lawsuit this week, seeking monetary damages for an apparent "diminished value of the phone."

It also asked Apple to provide a casing free. Apple had earlier said that the signal problem could be resolved by wrapping the phone in one of its "bumpers."

But on Friday, the company said it went back to the lab to do some additional testing because the signal drop was "far bigger" than normal for mobile devices.

After confirming that the cause of the glitch was related to the signal display, Apple said it would issue a software update in a few weeks. Because this issue can be found in all of its phones, there will also be an update for the previous-generation iPhone 3GS and iPhone 3G.

AT&T Corp., which is the exclusive carrier for the iPhone, also declined to comment and referred calls to Apple.

It's not clear whether the signal problem will hurt sales of the iPhone, which has been a runaway success. Apple said it sold 1.7 million iPhones in three days, surpassing its previous sales record of 1 million in the same time period.

But the software update to fix the signal display won't resolve reception complaints that have long dogged Apple and AT&T.

Dawn Boothe, a professor at Auburn University in Alabama, said she's so fed up with having hardly any reception with her new iPhone 4 that she's thinking about going back to using her older iPhone 3GS.

"Somebody's going to have to hold them to task because that may be what they're saying, but that is not what I'm experiencing," she said.

Apple said it has a solution for that too. Because users are not likely to get a misleading four or five signal bars anymore, Apple said its software update would make the first three bars "a bit taller so they will be easier to see."