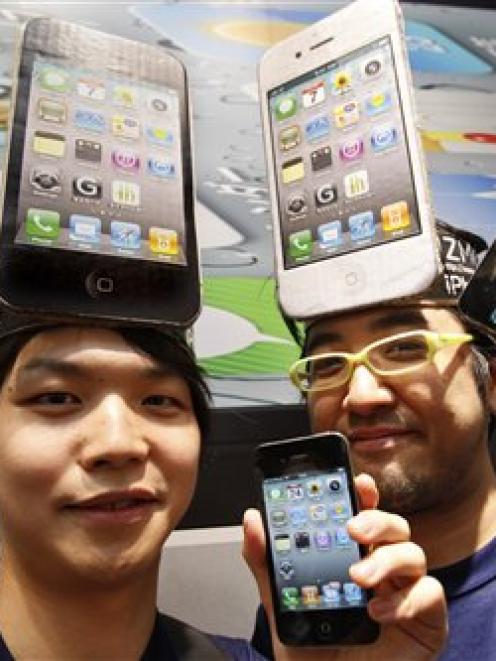 iPhone fans Mitsuru Endo (left) and Ryota Musha show the Apple's latest iPhone 4 during its launch at a Softbank store in the Harajuku district in Tokyo. Photo by AP.
Apple's newest iPhone was in short supply just hours after its global launch began in Tokyo, as hundreds queued outside stores across the city to become among the first in the world to own the device.

At the Apple store in the swanky Ginza shopping district, several hundred lined the street in the early afternoon heat, as staff handed out bottled water and loaned black umbrellas with the company logo.

A man dressed as a giant iPhone danced and waived his arms as he made it to the front of the line.

"I like the design. It's sleek - I think it's cool!" said Yoko Kosugi, 41, a graphic designer, who took her new phone out of her bag to show it off, plastic wrapping still on the screen.

Thursday's global launch of the iPhone 4 was being carried out at 7am local time in each region, so Japanese were among the first in the world to get their hands on the device.

The US, France, UK and Germany are also part of the global launch.

In the trendy shopping district of Harajuku, over 300 people were lined up at the flagship store of Softbank, Japan's exclusive carrier, when its doors opened in the morning.

"We've been selling out at each launch, it's the same conditions," he said, declining to release any numbers.

When the initial version of the iPhone was released in Japan two years ago, some questioned whether it could succeed without many of the advanced hardware features common on Japanese models.

But the phone's addictive touch screen and broad selection of downloadable applications have made it a runaway hit in the country.

The newest model is thinner with a better-resolution screen and longer battery life. It features a new operating system that can also be installed on some older models.

Even among Apple's most faithful, some said the phone has become a victim of its own success in Japan.

"As Softbank has cut prices and more and more people signed up, it has made the network much slower," said Motoki Sato, a university student who lined up outside of Softbank's store in urban Shibuya.

But he still waited through the night before the launch along with dozens of others at the Shibuya store, to get "a birthday present for myself".

He occasionally glanced at his black iPad as he spoke, and said he tried not use his older iPhone too much to conserve battery life through the long wait.

A swarm of pre-orders earlier in the week also led to long lines around Tokyo and overwhelmed computer servers struggling to keep up with demand.