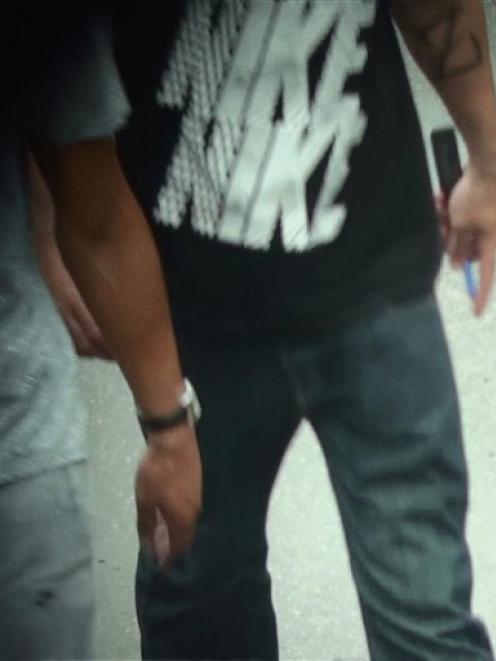 In this undated image made available by the St Peters Neighbourhood Monitoring, a man appears to be carrying a knife in a street in the St Peter's area of Leicester, England. Photo by AP.
Like many senior citizens, these elderly Englishwomen keeps a close eye on goings-on in their neighbourhood. What makes them unusual is their use of hidden cameras, night-vision equipment and the internet in an attempt to drive troublemakers out of their area.

The women, aged between 67 and 92, are part of a community group that wants to harness social networking and covert surveillance to keep tabs on litterbugs, drug dealers and others.

They claim they're using technology and people-power to transform lives.

Others say they're simply snoops, and question how effective their actions are.

David Lawson, the only man in the group and the only member willing to speak publicly, says "myself and the ladies" are simply "trying to do something about the issues that were blighting our neighborhood - litter and graffiti, but also more serious crime."

All live in the St. Peters area of Leicester, 160km north of London. It's an inner-city neighborhood with a high level of social housing, dominated by four high-rise apartment towers and blighted, residents say, by urban scourges from littering to drug dealing.

Enter the St. Peters Neighborhood Monitoring Group - 10 female retirees and Lawson, a 27-year-old with a background in technology.

For more than three years, the group has been filming litterbugs and posting the footage on video-sharing site YouTube to shame the perpetrators, and passing covertly shot images of more serious crimes to police.

They've recently branched out with an account on social networking site Twitter - used to update followers on the group's activities - and a web photo gallery of apparent misbehaviour.

It includes pictures of hooded youths, some with their faces covered, exchanging money and small packets and in one case carrying a knife.

The carefully worded site is careful not to accuse those depicted of any crime, saying it offers "a fly on the wall look at the daily activities and interactions of some of those who live here and others who visit this neighbourhood."

The group says its goal is to expose anti-social behaviour, and pressure police to do more to stop it.

Lawson denied that the members are taking the law into their own hands.

"We are simply recording and publishing what we record online," he said. "We are not calling these people drug dealers. We are letting people make up their own minds."

Lawson said the group has been advised by professional security experts and uses high-end equipment including Leica spotting scopes and high-definition camcorders, bought with members' own money and donations from local businesses.

He said the equipment has been set up so the elderly members of the group can use it easily.

"All the ladies have to do is press the record button," he said.

Much, but not all, of the feedback the group gets is positive.

Columnist Michael Leapman wrote in the Daily Telegraph that "it is hard not to admire their courage and their determination to combat the scourge of drug-dealing and random violence."

But James Treadwell, a criminologist at the University of Leicester, said such behaviour can have dangerous consequences - both for people who may be wrongly identified as criminals, and for members of the group, who run the risk of breaking the privacy or slander laws, or angering local drug dealers.

"I call them vigilantes," Treadwell said. "They're not tied by legal conventions, legal codes or due process. They're acting as judge, jury and executioner.

"Each of us consents to be policed by the state. These kind of groups we don't consent to."

The group received some negative publicity in May, when an 80-year-old woman in the area was fined for littering. She said she has been feeding bread to some birds, although local authorities claimed she had dumped a load of bread and food outside her house.

Even though she had been spotted by a street warden rather than filmed by the St. Peters group, it supported the fine, and came in for criticism as a result.

It is hard to measure the effectiveness of the group's activities. Leicester City Council said that as far as it knows, no one has been prosecuted or fined as a result of its actions.

Leicester Police would not give details of the force's dealings with the group.

Superintendent Phil Whiteley said only that "we work with many diverse communities who want to make a difference in their local area," and encouraged people to report concerns about crime to police.

Lawson said the group has handed footage of serious crimes over to police for use in their investigations, though he could not say how many convictions had resulted.

He said the group's mere presence in the area was having an impact.

"We know the fact we're doing it deters people," he said. "After we started filming, the incidence of littering nose-dived.

"We're here to stay. We're not going to go away and we will put their faces up there. What they think they do in dark corners - we will switch on our night vision equipment and get out our cameras.