Slacktivism: activism in a digital age 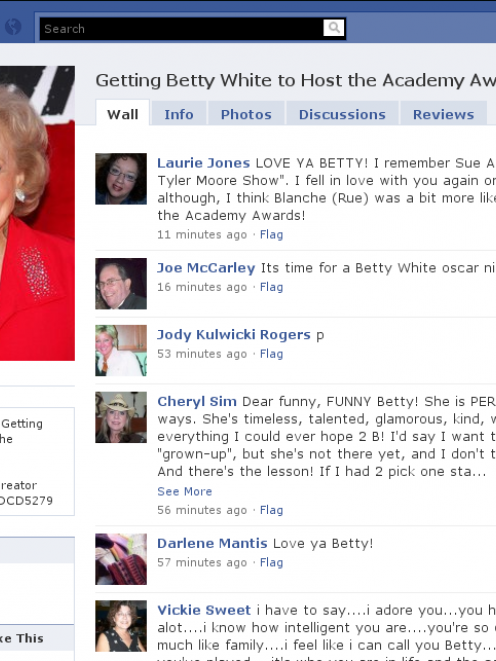 Slacktivism in action: the "Getting Betty White to host the Academy Awards" page on Facebook.
A few years ago, Kit Mueller would have gladly linked virtual arms with 5000 others and joined an online group for the preservation of old-time hobos.  He might have even signed a petition to support the wearing of baggy thongs. But lately, he's gotten serious.

"I'm a reticent slacktivist," the Chicago web entrepreneur said. "I get asked to join 50 online pop culture non sequitur groups a day, and it's becoming a bit much."

"You remember that bra thing?" he asked, referring to the brief movement last winter to encourage women to post what color bra they were wearing on their Facebook pages as a show of support for breast cancer awareness.

"Did that have any actual use - did it translate into any real action in the world?"

Mueller was taking to the subject of slacktivism - signing online petitions for often slight concerns, joining intentionally ridiculous Facebook groups, effortlessly supporting complex topics via mouse click - as though he had waited for someone to ask him about the subject.

"Facebook feels drunk with power," he said. "I guess I am less likely to rally around something because of it. Nobody has a minute to make good on enter­cause-here they supported online!

"Cancer - at the end of the day, how many of those people with a pink ribbon on their status page follow through on that ribbon? Is true value being replaced with slacktivism? Sorry to say, I think so. But it's still powerful."

"This catastrophe is what made Betty White. People wanted Leno out and failed. They weren't going to fail with her. Yet, if that many people actually watched (O'Brien's 'Tonight Show'), we wouldn't be here."

Then he went inside - a slacktivist who, in slacktivist fashion, was mindful of slacktivism's potential but too overwhelmed by its ubiquity to do anything.

Is this you? Are you exhausted by slacktivism? Sick of being pressured on Facebook and Twitter to provide click-support for countless causes, smart or dumb? Still unsure about joining that "Kill Betty White in the Next 'Texas Chainsaw Massacre' Remake" group on Facebook? (It's up to 245 members). Wondering where all this airy surge of short-term inaction may lead?

Talking to Mueller left me wondering a little bit less about why - less than six months since the Conan-Leno fiasco came to a head, then the charmingly random Send-Betty-White­-to-"Saturday-Night-Live" petition started - I've soured completely on petition-based, Facebook-mobilised campaigns, serious and silly.

"It all seems more harmless to me than anything, I guess," said Ellie Sisler, 23, of Chicago, outside the theatre.

Which is what I thought at first too. But now slacktivism irritates, and it doesn't just stop with the simple roll of the eyes when I heard about the Send-Carol-Burnett-to-SNL campaign (100,000 signatures and grow­ing), the Send-Betty-White-to-­host-the-Oscars petition (147,000 signatures and growing), or genuinely important groups like "One Million Strong for 'Anchorman 2".

I think it's because, as "slacktivism" implies, and Mueller suggested, it is too cheap, as feckless as it is immediate.

It has a narcissistic, self-congratulatory vapidity that, as social media experts reminded me later, is often simultaneously insincere and insistent.

And the ramifications are vast.

Culturally, what's at stake is more than a career boost for Betty White. If slacktivism is, by definition, an armchair sport, then in relation to the arts, it's one that has shown a willingness to move the ball on a whim, just because it can.

He said: "This is the first time it's conceivable for large groups to gain access and affect the thoughts and words and actions of pop culture, or any culture, and that's something we don't entirely understand yet.

"But as amazing as this is, it's already being taken for granted, I think - it's astonishing how easily someone who understands how social media works can manipulate a perception of excitement to suit whatever they want to do."

I called Sarah Evans, a Chicago-based social media consultant. I described to her a very unlikely but possible consequence of rampant slacktivism: Say there was a Facebook group dedicated to influencing the offerings next season at, oh, the Goodman Theatre . Say 10,000 people suggested that the Goodman stage, oh, "Cats." (Far­fetched, but this is theoretical.)

"Well, there are two schools of thought here," she said. "If you have a mobilized group of people who care enough to petition the Goodman, I would tell them it's a positive thing. It's an engaged audience. Embrace that.

"But if you do embrace it, the flip side is you now run the risk of telling those people it's appropriate to contact us in this way and effect change that way. You're saying, 'We're open to this, we're malleable.'

"The difficult thing is, we don't determine or control (where) it ends."

"Who online has experience in my field? Who is suggesting something and also has knowledge? I don't know. What is the emotional content of their words? Hard to say. It's impossible to know the intent of an individual online," he said.

"Do they really mean what they're asking for? Just because words are there doesn't mean you know what's behind them."

"We watched it," said Erin Hogan, director of public affairs for the Hubbard St Dance, Chicago, referring to the Betty White campaign. "We were as surprised as any, because it seemed so abstract, but at the same time, public opinion like that is not to be taken lightly.

"That said, would we listen to a Facebook petition? It really depends on the attitude of the voice. We'd take it seriously. But we're probably better stewards of our collection than Facebook is."

"If people signed an online petition and asked us to put on a certain show or something?" asked Charna Halpern, founder of the iO theatre.
"If enough signed, I'd probably say OK if it wouldn't get me into trouble. If they signed a petition asking iO to become a meth den? Then I might not pay attention."

It's a word that's been tossed about occasionally for at least a decade, though only recently came into its own via social media sites like Facebook and Twitter.

And though it's generally a pejorative - connoting a thoughtless, inch-thick devotion to causes large and small in place of actual blood and tears - it's not, in itself, a bad thing.

Indeed, slacktivism can do the kind of good that's hard to argue with. Donating to the earthquake relief fund by texting "Haiti" raised more than $32 million (accomplished partly at the urging of celebrity Tweets and re-Tweeting).

Slacktivism is not limited to the internet. Buy Nothing Day, magnetic bumper stickers, and even voting for "American Idol" could arguably be called slacktivism.

A fair case could be made that democratic voting, the act of merely marking a ballot, is another kind of slacktivism.

And, of course, the ultimate slacktivism would be doing nothing, and standing for nothing, while chipping away at those who, at the least, have honest intentions.

The trouble with slacktivism, though, is that at its clickable core we're not sure of intentions. Slacktivism requires nothing but an impulse.

Even the small, recent movement to quit Facebook to protest its privacy policies - followers pledged to go cold turkey beginning - required less effort to support than to act upon.

Even the names of nonprofit organizations dedicated to using the Internet to mobilize for serious causes - Do Something, Leap Anywhere - suggest vague, weightless involvement.

There is a vast difference, of course, between Facebook groups mobilised to undermine FarmVille and urge In-N-Out Burger to open a restaurant in every state and grass-roots groups that raise real dollars and assistance and awareness for actual concerns.

Sincerity, after all, is tough to prove online. At a recent meeting called by the Facebook group People Against the Malling of Wrigleyville - a meeting called partly to address the possibility that iO could be torn down as part of a proposed development - Halpern said one of the organizers told her the group is already up to 10,000 members.

You've heard of cause fatigue?

Last year, researchers at the Brain and Creativity Institute at the University of Southern California published a study suggesting the speed of social media may be reducing our ability to stay interested in a cause or even show empathy - online, at least.

Last year in Denmark, researchers created a Facebook group to save a local fountain from demolition. They gathered more than 25,000 supporters - and there were no actual plans to demolish the fountain.

Likewise, Solis said, as an experiment, he recently Tweeted a note of support for a good cause, imploring readers to click the link he included, which would register them to volunteer. He intentionally posted a bad link.

"There were 86 re-Tweets of my initial Tweet until anyone mentioned that the link was bad.

"Which tells me in order for these online petitions to mean something, be it about Conan or whatever, you have to embrace it in the real world."