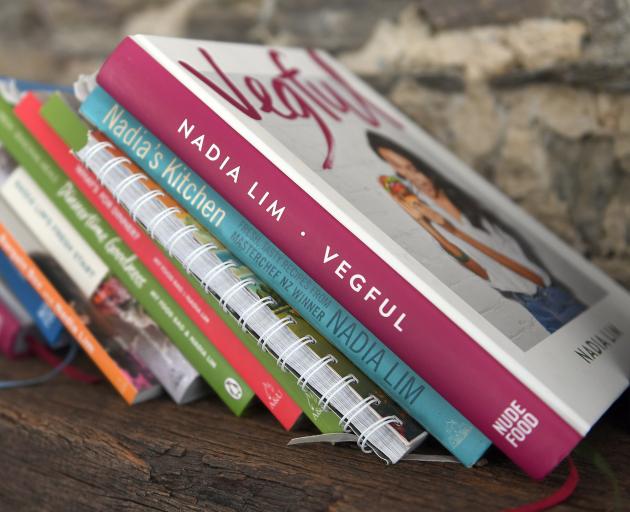 The bookshelf in Nadia Lim’s kitchen.
Celebrity chef and cookbook author Nadia Lim has traded city life for the Central Otago countryside. She talks to Sally Rae about her new life and latest projects.

When Nadia Lim was 12, her dream was to marry celebrity chef Jamie Oliver and have a television programme with him called Food in the Nude.

Snaring the UK’s Naked Chef might not have quite worked out — husband Carlos Bagrie quips she "got an upgrade" — but she secured her own celebrity chef status.

And that was further cemented during Covid-19 Alert Level 4 lockdown when the 34-year-old endeared herself to the nation, creating pantry staple recipes from the kitchen of her farmhouse, near Arrowtown, for televised cooking show Nadia’s Comfort Kitchen.

It was as real as you could get; the show was filmed by Bagrie mostly on his cellphone, with a camera used only for the "hero shots" of food. "There was nobody else; no set, no make-up artist or director. Hence there were quite a few bad hair days on the show," Lim said, laughing.

Bagrie — who has made the shift from marketing to man of the land — was still harvesting barley so it was a "mad rush" from driving the combine harvester into the kitchen to film, and then back out to the paddock. 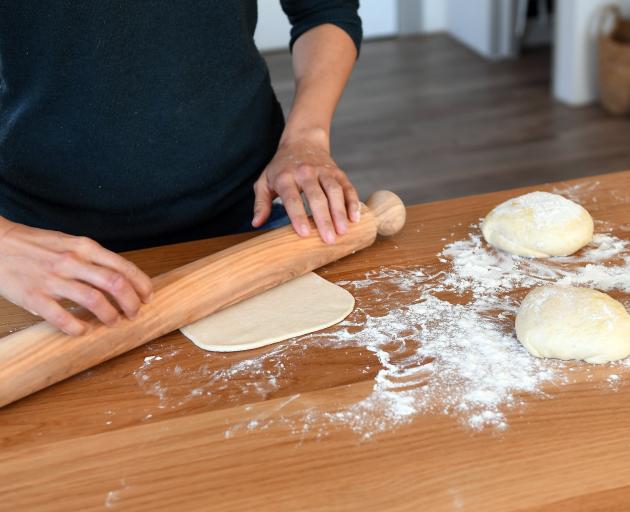 Making pizza to photograph for her Comfort Kitchen Cookbook.

Then there was the added complication of having two young children underfoot — sons Bodhi (4) who demonstrated exceptional egg-cracking prowess — and River (1½).

Lim reckons there was "a lot of screaming and fighting and bashing each other" edited from the footage, yet the reality of lockdown family life — replicated in homes throughout the country — appealed to audiences. "People seemed to love the fact it was just real. It was just us."

She was "blown away" by the response, particularly the countless messages from people who were not used to cooking discovering "a love and joy" for it. "Getting the whole nation to cook was a real silver lining for lockdown," she said.

Keen for that cooking to continue, she saw it as an opportunity to raise money for Covid-19-affected charities, compiling the recipes from the show into a cookbook, Comfort Kitchen Cookbook with all profits going to Women’s Refuge and Youthline.

As Bagrie reshot a photograph for the book earlier this month, in between crutching lambs, builders worked on the couple’s house, and a cameraman set up to film a commercial in her kitchen, down-to-earth and incredibly likeable Lim apologised, saying it was not always like that. But, as she says, the couple’s years "seem to be packed full of lots of different random things". 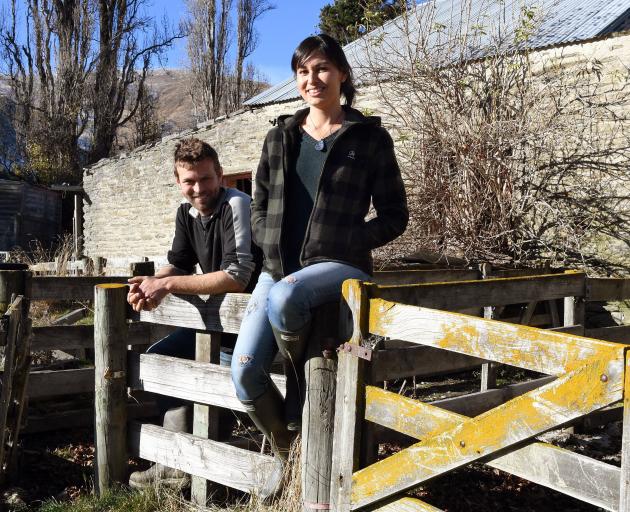 Nadia Lim and her husband, Carlos Bagrie, with one of their projects, a historic woolshed which they plan to restore.

Lim first rocketed into the public eye when she won the second series of MasterChef New Zealand in 2011. It was a "pretty terrifying" experience for self-described introvert, and her lip initially would quiver when a camera focused on her.

But her dream, since she was 12, had always been to write her own cookbook and teach people how to cook delicious, nutritious food and so she applied for MasterChef because one of the prizes was a published cookbook. She had written her own as a child with some "pretty horrendous" recipes in it, including the first entry of a chilli and lavender milkshake.

Her mother, Julie, was an "average cook" — "she won’t mind me saying that" — but her late father, Ken, had a natural flair, although didn’t cook often.

"I think I inherited the knack from him. I think Bodhi is going to have it too. I really just taught myself."

Her father was very strict on academia.

"I basically had to go to uni; there wasn’t really any other choice". She studied nutrition and dietetics.

She met Bagrie 16 years ago at Dunedin’s Captain Cook tavern during Orientation Week. "Across the dance floor, no kidding," she recalls.

On their second or third date, Southland-raised Bagrie, who was studying marketing and psychology, told her he would return to the land to farm one day and, if they ended up together, would she be OK with that? She responded affirmatively, asking if he would be OK with her being a celebrity chef. 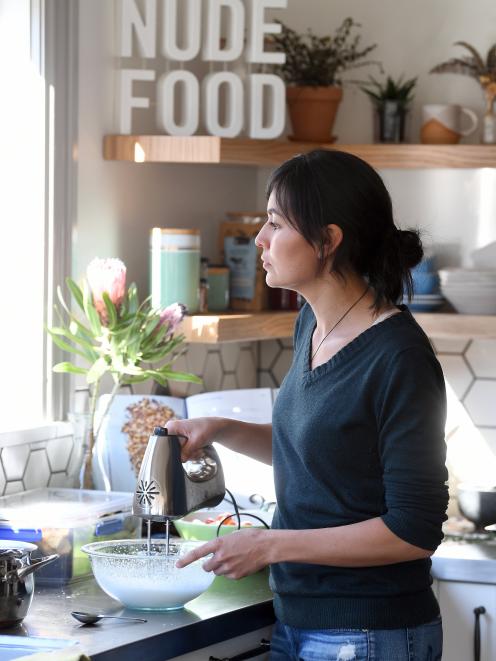 Nadia Lim watches her chickens while making chocolate mousse in her kitchen.
Following the MasterChef success, during which time Lim was working for the Auckland District Health Board as a clinical dietitian, both she and Bagrie quit their jobs.

They had bought their first home and had a mortgage and "just did whatever we could", Bagrie says — leading to what he describes as some "hilarious jobs".

Their first catering job almost burnt down what was probably a $10million home on Auckland’s waterfront when the pan, containing fatty duck, burst into flames.

There was a catering assignment for a "roofers shout" for 20 people on a launch in the Bay of Islands. The couple stayed up until 4am cooking and preparing food and were picked up by helicopter at 7am.

Preparing the food in the tiny galley, Lim suddenly did not feel well and spent the rest of the trip in the bathroom, relaying instructions to her husband.

Then there was a cooking demonstration at a kindergarten — the teacher was a big fan of Lim’s — and the couple turned up to find nearly a dozen 2- and 3-year-olds sitting on the floor, and several parents looking on awkwardly.

The demonstration was done on one of the toddler-sized tables, next to the unfortunate-smelling children’s toilet, while Bagrie was out the back doing the dishes "crying into the tea towel". From that point on, they decided they needed a product they could take to market. "We couldn’t replicate Nadia," Bagrie says. 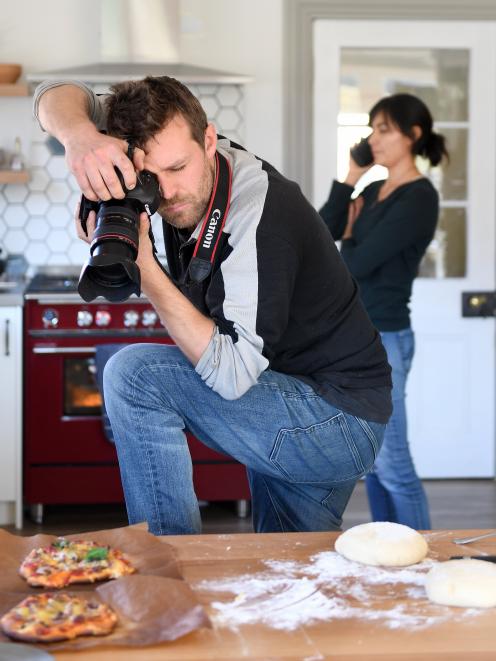 Carlos Bagrie photographs pizza for their lockdown book while Nadia Lim deals with a phone call in the background.

My Food Bag was founded eight years ago by Bagrie and Lim, Cecilia and James Robinson and former Telecom chief executive Theresa Gattung.

The meal kit home delivery service was an entirely new concept for New Zealand and Lim admits it had its doubters, including family members.

But those behind it knew it was a great idea; for Lim, seeing clients one-on-one as a dietician, there was often a missing link between telling someone what they should be doing and them putting it into action. When it came to food, that missing link was often cooking and she saw that My Food Bag could help fill the gap.

While they knew it would do well, Lim acknowledges it kept exceeding expectations, as it continued to grow and evolve. Since its launch, it has delivered 70million meals to Kiwi families. Bagrie describes it as "‘a real New Zealand business success story", in the top few of the country’s startups.

Originally, Lim was the only recipe developer but now the test kitchen was about 20-strong and there was a database of about 12,000 recipes.

Lim still developed some recipes and, while not so operational as in the past, she was in touch with the My Food Bag team at least a few times a week, and involved with brainstorming ideas. She always had her eyes on trends and what was coming up in the food sector.

Her catchphrase is Nude Food and she has three key principles around that — ignore fads, trends and diets; stick to real food from the ground, sea and sky; and that the best person to know what is best for your body is you — "trust your gut, literally".

There’s a prominent Nude Food sign in the kitchen of the family’s 160-year-old farmhouse, the hub of the sheep and cropping operation in a region where Bagrie has strong roots.

His great-grandfather Joseph Bagrie farmed Queenstown Hill, followed by his grandfather and his father, John, grew up there before moving to a farm in Southland. His own goal was always to move back to the region and to go farming. 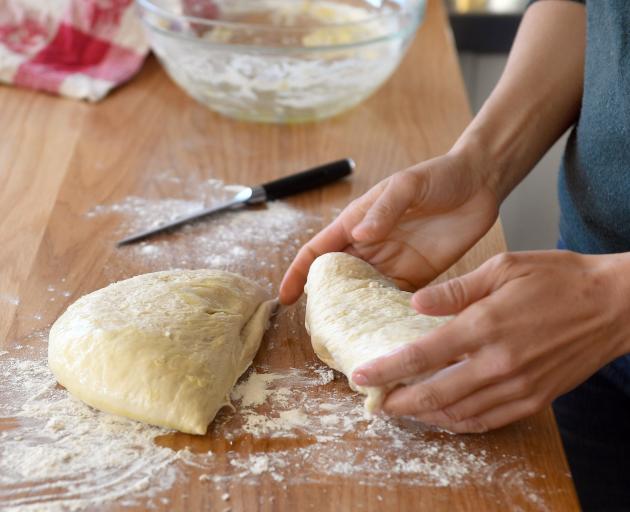 The house was previously "pretty much derelict", with rats’ nests in the walls, and he got the house renovations under way, initially not letting Lim see it because he was worried she would say they would not be able to live in it.

He had been in the South for a few months before she moved down just before Christmas last year. There was no floor in the kitchen, just dirt and broken floorboards, no oven or dining table, doors weren’t in, and there was open wiring. Even Bagrie concedes it was "pretty rough".

There were big holes outside, she feared the children could fall into "and be lost forever", and while admitting she was "pretty easygoing", Lim left "just for a bit" until the renovations were a little further down the track.

Ask her if she misses city life and the answer is an emphatic "no way". "I always knew I was going to end up here so I was prepared for it."

She is a passionate advocate for New Zealand farmers, saying everyone needs farmers "three times a day". New Zealand was best placed in the world to be the leader in sustainable and ethical farming.

Bagrie agrees, saying New Zealand produced amazing products, whether agricultural, horticultural or fish. He was proud of the farming community, who were world leaders in many respects.

Aiming to strike a balance between a better end product, higher profitability and lower environmental impacts, the couple had big plans, including diversification. Farming, like other businesses, was facing major change over coming decades and those that kept doing what they always did, would get what they always had got, he said.

Lim was enjoying the "amazing free outdoor supermarket" the farm afforded, as she sliced wild pork sausages on to pizzas. Rabbit was also regular item on their menu, along with homegrown vegetables.

With a string of successful cookbooks to her name, on the calendar in the kitchen is a date marked for the Gourmand World Cookbook Awards — she was supposed to be in Paris this month for them, which awarded her latest Vegful runner-up for best vegetarian cookbook.

Covid-19 stopped that — and an outing for the dress she bought for $50 from the Dancing With The Stars costume sale — she competed in the show last year.

Asked if she ever got tired of cooking, she says: "doesn’t everyone?". Baked beans on toast, with a poached egg, were known to be served up in the MasterChef winner’s kitchen. "Or just takeaways".

Thanks to Nadia and in UK Jamie who got rid of the fiddly bits and showed real skill--the skill and the knowledge of how to use a substitute ingredient, rather than often one that was hard to source of more expensive. This is real creativity and we look forward to more of this when and if these leading people go back to their regualar shows. I did find Jamie a little more realistic--perhaps it was because he often needed a shave and those kids certainly were busy--but aesthetics aside, well done both chefs.