The good oil on Mr Hatch 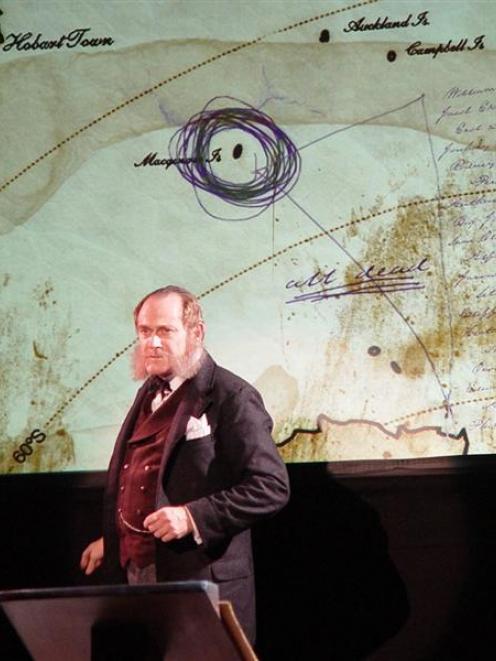 Perhaps the most amazing tale to come out of the 2008 Otago Festival of the Arts is the true story of Joseph Hatch.

Joseph Hatch was an Invercargill mayor - sort of a yesteryear Tim Shadbolt - who almost caused civil war between Otago and Southland in the early 1900s.

"He was a bit irascible, which only adds to his charm. He was an industrial Barnum and Bailey, really," Stuart Devenie says.

The 57-year-old actor plays Hatch in Hatch or The Plight of the Penguins, which premieres in the Otago Festival of the Arts tonight.

Hatch arrived in Invercargill from England in 1862, running the Riverton Post Office before setting up a chemist dispensary in Dee St, Invercargill.

"The building is still there. Farry's Dress Shop is there now. I went down to have a look at it and walked up the same steps Hatch walked up," Devenie says.

In 1877, Hatch was elected mayor and then to Parliament in 1884 as member for Invercargill.

"New Zealand at the time was very entrepreneurial. There were lots of things an energetic entrepreneur could get into. He was such a popular orator he could probably have become prime minister."

The South Island led the New Zealand economy from the 1860s through to 1900 with its gold, coal, wool, frozen meat, larger population and more developed infrastructure.

Dunedin company Elder and Co had already shipped equipment to subantarctic Macquarie Island for rendering down sea elephants, but abandoned the trade as uneconomic.

Hatch switched his attention to penguins and developed huge digesters to render down the birds to produce batching oil, which was used in the manufacture of hard-fibre cordage, or ropes.

"Ropes were so important and needed batching oil, which was a part of the manufacture process. Up till then, they were made with seal oil and whale oil. But Hatch worked out it was much easier to catch penguins than seals and whales," Devenie says.

"It's such an amazing story. He rendered three million penguins into oil. I had never heard of it until I read the play."

But after World War 1, Antarctic explorers began to publicly criticise Hatch's Southern Isles Exploitation Company on Macquarie Island and, in 1919, the Tasmanian Government withdrew his licence.

It was a time when Tasmania was ethnically-cleansing its Aboriginal population, whales were being slaughtered in their thousands in the Southern Ocean and the great kauri forests of Northland were being felled.

"Yet, this was really the first global ecological campaign. The Brits started a campaign to get [the seal slaughter] stopped and Hatch got his licence cancelled.

"So he went on a public lecture tour of New Zealand and Australia with a petition to get his licence back," Devenie says.

Hatch or The Plight of the Penguins revisits one of those public meetings in the 1920s.

Further controversy erupted when a ship sent to retrieve Hatch's workers from the island, the Kakanui, sank.

"The captain of the Kakanui was from Dunedin. It became a huge provincial conflict," Devenie says.

"Even young mothers in Dunedin would threaten their wayward children: 'Behave! Or Mr Hatch will boil you in a pot'."

Macquarie Island is about 34km long and 5km wide and lies about halfway between New Zealand and the Antarctic.

It is home to an estimated four million seabirds.

"It's a very funny story. It hits all the buttons - the writing, production and acting," Devenie says.

"It's a really interesting play on three different levels - it's a story about a late-19th-century character in a 1920s public meeting being watched by a 2008 audience, with their modern ecological sensibilities."

Writer Geoff Chapple learned about Hatch when he visited a Southland Museum display of Hatch's digesters.

"As a story, it's a gift. Small man fights for survival against powerful international conspiracy," Chapple says.

"The fact that he was fighting for the survival of what now seems an odious industry made it more complex. [But] from the time I knew Hatch had given illustrated lectures in his own defence, I knew it would work.

"But, I was intrigued, also, that there was still a reputation at stake. In that sense it was alive, and we might even imagine it ghosted by the man himself."

His licence was never renewed and his grave at the Cornelian Bay Cemetery remains unmarked to this day.