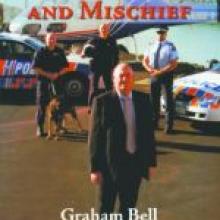 A no-holds-barred account of Graham Bell's 33 years in the New Zealand Police.

Graham Bell, the no-nonsense presenter of Police Ten 7 on TV2, has written a no-holds-barred account of the 33 years he spent in the New Zealand Police.

In detailing the many cases in which he played a prime part in ensuring criminals - some responsible for horrendous acts - received their just deserts, Bell makes it obvious that he was a truly dedicated upholder of the law.

Though the author is no stylist, his easy-going, rough-hewn style and sardonic sense of humour are well attuned to the often gritty situations he describes.

Tighter editing, though, would have been well-justified.

The publisher should not have permitted printing lapses like a continuous stream of it's for its, or the author's far-too-frequent use of exclamation marks, to have survived.

Bell does not hesitate to criticise perceived weaknesses in the force he served so well.

The justice system itself comes in for a right good walloping.

He said his distaste for lawyers grew throughout his career, and often extended to prosecutors.

"They all end up getting caught up in the 'game' of our adversarial justice system. I have often said that the justice system is completely misnamed. It is the 'court' system, and what goes on in it has little to do with justice.

"The rules and niceties overshadow everything else, and crime victims, witnesses, police and offenders are just the fodder that keep it all running. Despite the people who get caught up in it, it is largely a vehicle for the ever-growing legal fraternity to earn a handsome living."

Bell said he had lost count of the number of times he was accused of fabricating evidence by lawyers with little regard for the truth or accuracy themselves.

The book contains plenty of photographs.

• Clarke Isaacs is a former chief of staff of the Otago Daily Times.