Dealing with unfairness must be part of the mix 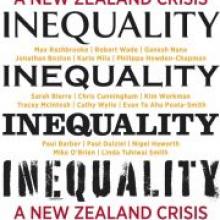 Traditionally it has not had much traction with New Zealand voters, which it needs if progress is to be made in correcting it. What has resonated with our voters historically is ''unfairness'', which is an emotional rather than rational response to the same issues.

A current example of the unfairness approach is the addressing of traditional Maori grievances through the Treaty of Waitangi process.

There is widespread agreement in New Zealand that Maori have been treated unfairly.

Where this process has failed and is failing lies in the power given the judiciary.

That gives ultimate responsibility to the academics.

The courts decided that the Crown's Treaty partner was the tribes who had signed it.

The tribes are represented by their rangatira so most Maori are not benefiting from the settlement process.

This means what has been done will not amount to ''a full and final settlement'' as was promised, and the billions of dollars involved will be found not to have addressed the unfairness that is the basis of public support for the process.

Future generations of Maori leaders will claim that ''unfairness'' is still as bad as ever.

Having got that enormous negative out of the way, it is also true to say that understanding ''inequality'' is hugely important. In fact, ''unfairness'' can hardly be addressed without understanding it.

The papers and dissertations in this book will go a long way towards achieving understanding, and so are (or should be) an important aspect of the process.

Four of its assertions/facts are an essential part of this:

• New Zealand now has the widest income gaps since detailed records began in the early 1980s;

• From the mid-1980s to the mid-2000s, the gap between the rich and the rest has widened faster in New Zealand than in any other developed country;

• The average household in the top 10% of New Zealand has nine times the income of one in the bottom 10%;

That must qualify as ''inequalty'' in anybody's language.

It is not, of course, a local or new phenomenon.

It is a global one, and during the 20th century two global ideologies competed to fix it.

First was communism, which offered hope to the unequal but eventually (in fact, almost immediately) gave them despotism and horror.

Second was neoliberalism, which offered the now-discredited ''trickle-down'' theory but in fact accelerated inequality, as shown in the bullet points above.

Inequality is now so stark in many parts of the world that violence is seen as the only remedy.

To describe it as ''a New Zealand crisis'' is to miss the point.

Trying to find ''a New Zealand'' solution seems pointless, even though defining, describing and analysing is very helpful.

One chapter appealed particularly; an attempt by Mike O'Brien to find a better welfare system, in which he talks about income redistribution and taxation.

It is such a pity taxation reform seems to be a political ''no-no'' for the main parties.

They have convinced themselves even considering it would cost them any chance of winning office, or receiving political donations.

So, dealing with ''inequality'' is a valid exercise. But unless it also deals with ''unfairness'' it will not achieve much.

Rioting and violent crime against people and property in so much of the world show how people will respond to inequality they also regard as unfair.

• Oliver Riddell is a retired journalist.