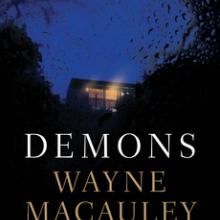 DEMONS<br><b>Wayne Macauley</b><br><i>Text Publishing</i>
The cover of my copy of Demons says it is ''social satire'', but I didn't notice this until I'd finished the book. It didn't seem all that satirical to me, more like a call for help and a call to arms.

The plot revolves around a group of Sydney-based Generation Xers (those born between 1965 and '75) who decide a weekend away at a seaside holiday home north of Sydney is just what they need to recharge the batteries.

They're all comfortably off and move in the same social circles. I have to admit I had some trouble settling into Demons, not because I'm well past the Xers age but due to the narrative style: I dislike novels where the speech of characters lacks speech marks and is all lumped into the same paragraph.

However, Demons is a brilliant, thought-provoking dissection of group members, especially the males.

Mainly due to the wisdom of the wives, one of whom suggests that each tells a story, the weekend kicks off in low-key fashion, as the couples settle down with alcohol, snacks and who knows what.

But the telling of the stories adds an element of unease, a portent of what's to come as storms rage outside (it's very much a winter's tale) and it becomes apparent these Generation Xers have skeletons in their cupboards.

What lies ahead for politician Marshall, musician turned property speculator Adam, and Evan and Leon, not to mention their wives, Hannah, Lauren, Megan and Jackie? Will the tale-telling and liquor/drugs and storms result in any surprise surfacing of midlife issues? You bet!

When I was a teenager, I became addicted to vampire movies but always had a cross handy to ward off evil spirits when I went to bed. There is an element of evil in the stories the friends tell that contributes to the surfacing of buried (in the psyche) issues.

But the major point that Macauley seems to be making is how easy people of that era had it compared with now. It's probably all downhill from now on.