Poetic persona seen in all his fullness 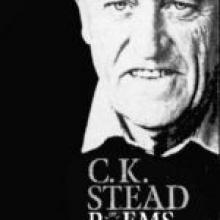 This handsome (and heavy) volume was launched in late November last year.

I have been carrying it around, even to Australia and back, for more than four months, trying to find time to take in its 548 pages and to formulate an adequate response to it that could be contained in a brief review.

The task may be impossible, but in what follows I will try first to describe the book's contents and then to give a brief personal response.

There is also a final 18-page section, "Some Early Uncollected Poems 1951-61", which reprints in chronological order poems from those years which either had appeared in periodicals only or had not been previously published.

Stead in the foreword states, "I have tried, on the whole, to represent my own history as it occurred, and not make it look better, or myself wiser, more mature, more adroit, than I was at the time," and most of the poems are as first published.

However, Stead has revised some of the earlier uncollected poems, deleted a few of the previously collected ones, and revised a few, sometimes heavily, as with the well-known Dialogue on a Northern Shore from 1958.

There are 15 pages of helpful notes to the poems that identify some of the sources, allusions, references and background, and there are full indices by first line and by title.

In terms of inclusiveness, format convenience and text, the volume is all one could ask of a collected poems.

Stead the literary critic has commented that "The more we read of the work of any of the great writers, the more we have the strong impression of a single personality encompassing the whole oeuvre," and that is certainly true of Stead the poet in this volume.

The poems show the poetic persona "C.K. Stead" developing over 55 years, changing yet remaining a single personality, just as did Christian Karlson Stead, the creator of that persona, as he evolved from the young athlete "crossing the bar" in the high jump in high school and making a poem about it in his 30s, to the 72-year-old man suffering an ischaemic stroke and making a poetic sequence about it in the immediate aftermath.

The poet who uses a line from Valery for an epigraph in Pictures in a Gallery Undersea in his first book, to ask if he will continue to sing when he is gone from the life of London, is the same poet who uses that line as an epigraph to Black River Blues in his last book, to ask if the poet will sing when he is "gone away / down to the end of the ever / to row on the black river".

The young poet sings using rhyme in the manner of Yeats in A Natural Grace or of Eliot in mixing irony and lyricism in Pictures in A Gallery Undersea.

The older, more often ironic poet turns more to open forms and usually shorter lines in poems such as the moving war sequence Crete from The Right Thing in 2000 or Rapallo: An Economy from The Red Tram in 2004, and the lyricism turns more often on memory, as in the title poem in the latter volume.

But throughout it is the same evolving poetic sensibility with its clear-eyed view of the world, its interest in capturing the physical and psychological experience of the moment, expressing itself with the same sense of poetic form, of the musicality of language, of simplicity and economy of diction.

Bringing together the work of the younger and the older poet, along with all that falls between them, this volume gives the reader the chance to experience that evolving poetic persona in all his fullness.

It is a book to be put on the shelf next to the collected poems of Allen Curnow and James K. Baxter, and to take down from that shelf often to be in contact with one of our truly great poets.