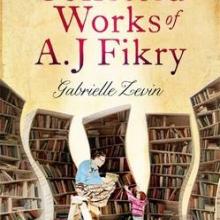 THE COLLECTED WORKS OF A.J. FIKRY<br><b>Gabrielle Zevin</b> <br><i>Little, Brown</i>
The best thing about being a book reviewer, is getting acquainted with authors I wouldn't normally read, especially those whose names begin with ''Z''.

I now know Gabrielle Zevin has written eight novels, five for younger readers and, with The Collected Works of A.J. Fikry, three for adults.

However, older teens into quirky literature with serious themes will find much of interest. That's because Zevin writes about change; events that light up lives and relationships, and ones that do the opposite.

These events and changes specifically apply to A.J. Fikry, the 39-year-old owner of a bookstore. I'm thinking Charles Dickens as I write this, as most of the characters have a Dickensian feel, but I'm not sure where ''collected works'' comes into it.

Although the general tone is light-hearted, and the text teaming with clever puns and changes of pace; hope and happiness are distant dreams when the story opens.

A.J's situation living on Alice Island off the coast of Massachusetts is dire. He's trying to cope with the loss of a wife killed in a car crash, and barely selling enough books to make a living. What's more, he's drinking too much, his health is deteriorating, and a valuable first edition of an Edgar Alan Poe novel has been stolen. He can't even respond to the obvious interest of Amelia, a book publisher's rep who is also a little on the lonely side.

What could possible throw a spanner in the works of such a dismal scenario? Try waking up after a drunk-a-thon and finding a beautiful female infant named Maya, tucked into a basket in the children's books section.

I don't know if Alice Island exists, but I suspect some sort of pun is intended vis-a-vis Ellis Island where immigrants to the US were vetted. Whatever! Alice Island comes vividly to life under Ms Zevin's literary brushstrokes, as Maya grows from a 2-year-old to a 6-year-old at the turn of a page, and then, similarly to a 14-year-old.

With his dead sister's wife to lend a helping hand, book sales improving and A.J. finally responding to Amelia's attractions, all the ingredients point to a happy ending. Or do they?

As a side issue, Maya's literary interests and A.J.'s and Amelia's professions, allow Ms Zevin to name-drop literary greats and their works, useful background for seekers of careers in teaching, scriptwriting, journalism, etc, and of course, that of author and writer.