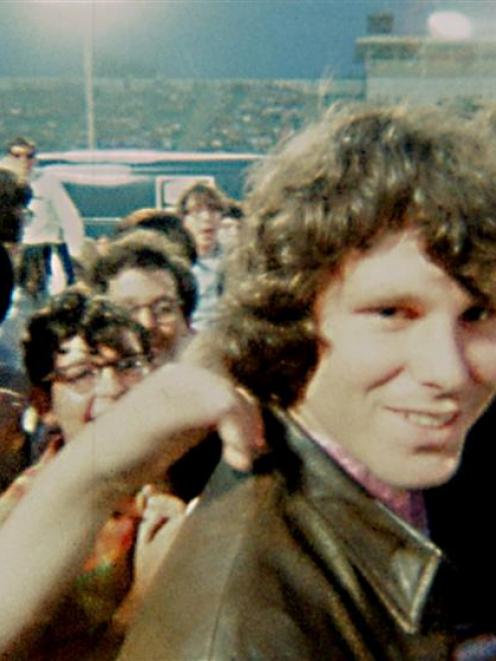 Directed by Tom DiCillo and narrated by Johnny Depp, the 90-minute film uses previously unseen footage from other projects, most notably the unreleased 1969 experimental film HWY: An American Pastoral, which stars Jim Morrison. It's a startlingly intimate work that helps humanise this lionised foursome.

Guitarist Robby Krieger penned some of the Doors' best-known songs, such as Light My Fire and Love Her Madly. The 64-year-old musician has kept busy in the years since the group's demise; he's working on his autobiography and recently released a new solo work, Singularity.

He spoke about the new documentary.


Q So, why make this documentary now?
A We've had various videos out over the years but we never had a feature-length video. We never thought we had enough stuff, you know? When we got our new management about five years ago ... they started pulling all the bits and pieces together to see how much we had and then we got Dick Wolf Productions involved.

It seems like once people hear you've started a project like this, stuff starts coming out of the woodwork and we were able to find a lot of outtakes.

Q And how was DiCillo chosen?
A I think he had a good record with film festivals. He just seemed like a good pick. I didn't know much about film guys, but (producer) Dick Wolf and those guys know a lot about 'em.

We needed someone to make sense of all this stuff; we didn't want to do it ourselves because we didn't want to be patting ourselves on the back: "Oh, we were so great". They would show us what they were doing (but) most of the ideas came from Tom and their editors were really great.

Q Was anything uncovered that surprised you?
A Not really, I knew we had all this stuff - I just didn't know where it was. I actually hadn't seen a lot of these outtakes from (1970 concert film) Feast of Friends and from Jim's movie HWY, which was really surprising to find that stuff. It was kind of cool.

It's too bad Jim never got a chance to finish that movie, it would've been great, but we got permission to use what was there from his estate and I think they made good use of it.

Q I have to confess: For a moment, I thought the scenes from HWY were staged footage.
A A lot of people thought that - you weren't alone. In fact, when we played it at Sundance, there was this one guy, a big-time buyer, and after he saw that stuff with Jim in the car, he just stormed out, and our manager ran after him: "What's wrong?" "You guys had an actor to play Jim Morrison - this is ... !"

Q Does it get easier over the years, looking back at footage from that period?
A It is kind of weird to see stuff of yourself, but it's not as though I hadn't seen it in 40 years or something. It's not as big of a shock as you might think. It is nostalgic and it's really fun to go back and think about those times.

I think the movie really had a good handle on the '60s.
It was being in the right place at the right time; I think that has to be part of the luck that's involved in being a successful rock 'n' roll band.

Q Despite all the frustrations, particularly towards the end, was it worth it?
A Oh yeah, for sure, I wouldn't have changed anything. Except it would've been nice if Jim had stuck around a while longer. But that's how he was and you had to take him at face value. We knew what we were in for, but it was a once-in-a-lifetime chance. No question about it, wouldn't have changed a thing.

Q Why do you think the Doors has endured?
A Besides the fact that the music is great, I think if you look at those albums and you check each one out there's really no bad songs in there. Every album has a lot of good stuff on it.

A lot of bands you hear about are one-hit wonders or whatever, they might have one good song on an album, but we had high standards. We wouldn't put something out unless we really believed in it. It's amazing how many albums we put out in such a short time.

Today, you might get one album out every two years. We sort of knew that Jim might not be around too long, so we had the feeling, "Hey, let's keep recording. Let's get as much as we can down before something happens". And it was true.

Q How do you think this film sits alongside the 1991 Oliver Stone biopic?
A I think it's a perfect companion; it shows the other side, the reality side of the Doors. I'll bet you five years from now, they'll play 'em one after the other on TV.

Q What are you hoping people get out of When You're Strange.
A I hope people that have watched the Oliver Stone movie, I hope they do see this so they can see what was reality and what wasn't.

I thought the music was great and Val Kilmer was great (in Stone's movie), but the way they portrayed the band and Jim, it just wasn't right. When you try to put words in somebody's mouth - let's face it, that script was pretty bad.