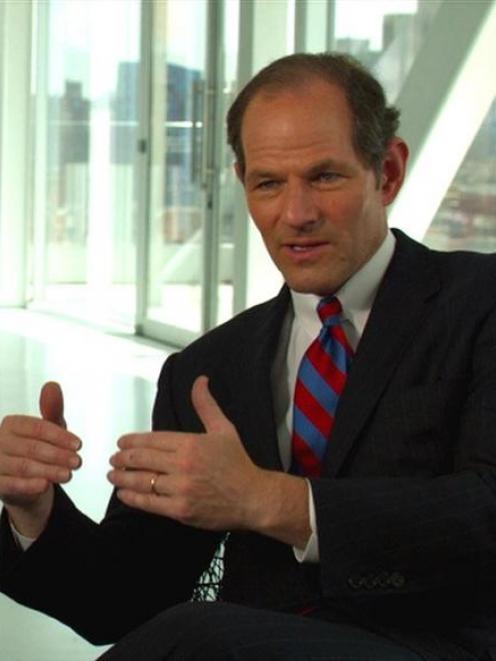 Former New York State attorney general Eliot Spitzer talks during the documentary.
You can tell by their titles - the Oscar-nominated No End in Sight and Inside Job - that the documentaries Charles Ferguson makes are not heartwarming. But that isn't what sets him apart from other film-makers and isn't what makes his films so extraordinary.

Because of his personal and professional background, his intelligence and inclinations, Ferguson is especially well-suited to creating knockout documentaries that cogently lay out all the particulars of a significant situation. These are films that enable you to understand complex circumstances and encourage fury at what went wrong.

That's what Ferguson did with the American occupation of Iraq in 2007's No End in Sight and what he does with the global economic crisis in Inside Job.

This film lays out in exceptional, but always understandable, detail the argument that the meltdown of 2008 was "not an accident" but rather the result of an out-of-control finance industry that took unethical advantage of decades of deregulation.

It's a powerhouse of a documentary that will leave you both thunderstruck and boiling with rage, exactly how the film-maker felt.

"When I finally figured out what had gone on here, yeah, those were my feelings," Ferguson says. "This is too important; these are huge things that happened."

One of the things that makes Ferguson's documentaries stand out is the access he gets. For Inside Job, he secured interviews with dozens of articulate insiders, including International Monetary Fund chief Dominique Strauss-Kahn, French Minister of Finance Christine Lagarde and Singapore Prime Minister Lee Hsien Loong.

"I know who they are, and they're not always obvious people, and they know who I am," he explains. And who he is is a story in itself.

For Ferguson is not some dreamy film-school graduate. He is, in his own words, "a niche product" as a director: a plugged-in academic who has a PhD in political science from MIT and spent a decade consulting around the world.

Making his films rigorously factual is important to him because "I spent eight years getting that PhD, and I want to still be able to talk to those people".

Ferguson has also "loved movies since I was a kid. For 30 years it was a secret dream of mine to make movies".

In 1996, he sold Vermeer Technologies, a software firm he founded, to Microsoft for $130 million.

"I owned only a tiny percentage of the company, but, and this is the term used in Silicon Valley, it was enough to give me ... money. I don't have a mansion or a private jet or an island, but I don't have to do anything I don't want to." Enter movie-making.

After No End in Sight, Ferguson was looking around for something else to do. Two friends, including author Charles R. Morris, whose The Trillion Dollar Meltdown predicted the crash, told him about their fears for the financial world. "I said, Trillion-dollar meltdown? Isn't this kind of alarmist?' And they said, `Charlie, just you wait'."

As one who made a large sum by founding and selling a company, Ferguson is hardly an enemy of capitalism and further describes himself as "not an ideological person. I'm a moderate, I'm pragmatic, I try to take the facts as they are".

Ferguson is also thoughtful and articulate, and when asked if he's always been opposed to deregulation, he says: "You could say I've been somewhat radicalised by recent events, but I don't think that's it. I think it's that behaviour became so much worse, and that's an important distinction.

"There's general agreement that people shouldn't rob banks, but then you have 50,000 people who are running banks and robbing them. I haven't become more radicalised, people have changed. Something has happened to us, and I hope we can un-happen it."

• Catch it
Inside Job screens at Rialto, Dunedin tomorrow at 1.15pm and Monday at 6pm.