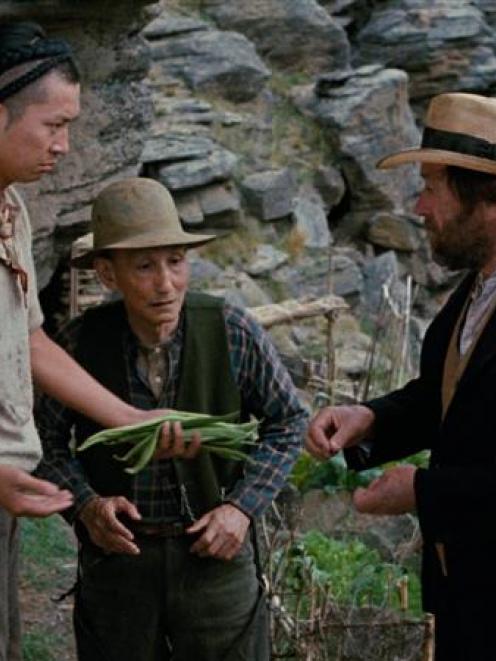 Photos supplied.
Illustrious Energy might highlight a period in New Zealand history, but the film also has its own interesting back-story, writes Shane Gilchrist.

Described as "the finest New Zealand movie that no-one has seen", Illustrious Energy makes its reappearance at the International Film Festival in Dunedin next week.

On its release in 1988, the portrayal of Chinese goldminers in late 1800s Central Otago garnered critical acclaim and a slew of awards, including eight national and two international prizes.

Then, just like the gold that lured thousands to those rocky hills and valleys, it vanished.

A victim of the collapse of Mirage Entertainment in June 1988, Illustrious Energy was sold to a company in Los Angeles as part of a package of eight titles (including Came A Hot Friday).

Over the next few years the film was sold on as companies came and went, retitled Dreams of Home, and the master negative misplaced. 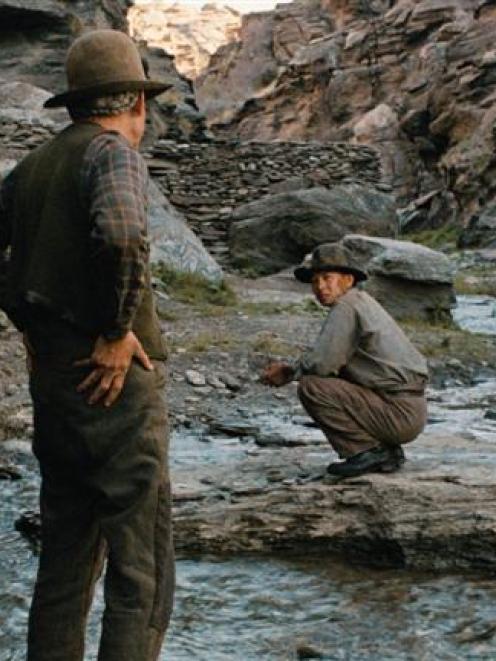 Leon Narbey, perhaps better known as a cinematographer (recent credits include Dean Spanley, Whale Rider and No. 2), unearthed his feature-length directorial debut effort in a restoration laboratory in Slough, west of London.

"That was a big surprise," Narbey said by telephone from his Auckland home earlier this week.

"About 10 years ago, someone contacted me asking about the film, and I contacted the New Zealand Film Archive, assuming the negative would be there, but it wasn't.

"Because that LA company was sold, the film went to another company and so on and every time it moved on, the person you'd contact didn't want to know about it. They changed the title - I hate Dreams of Home - and unfortunately the New Zealand Film Commission still has it lodged as that in its database," Narbey explains.

"When I was working on Dean Spanley in 2007 in the United Kingdom, I shot down there on one of my day's off and, sure enough, here were all these titles from Mirage. I got hold of the Film Commission and told them we had to get the films out of there.

"We eventually got the sound mixes sent back as well as the 'interpos', a marriage of two negatives that has all the density values. They were shipped back and Weta Digital scanned them. The Film Commission funded all this; in the end it might have cost about $70,000 to restore it."

A New Zealand Arts Foundation 2010 laureate, Narbey admits to a sense of relief that Illustrious Energy will screen again, 23 years after it first aired.

"The hope is that it will find a new audience who will enjoy it."

Narbey's film was inspired by just a few paragraphs in a book about Chinese goldminers.

Scriptwriter Martin Edmond introduced Narbey to Peter Butler's Opium and Gold, a history of Chinese miners in New Zealand that included a depiction of a Chinese poet called Illustrious Energy (actually, his name was Illustrious Envoy, but was mistakenly changed by way of a typesetting error), who ended up languishing in Seacliff asylum.

The extract related to the writings of Rev Alexander Don, a Presbyterian minister whose knowledge of the Chinese miners was contained in diaries (collected by Dr James Ng, an authority on Chinese goldminers in Central Otago).

Narbey had long been fascinated with China. He went there in 1979 and made three documentaries, visiting the silk road, which reminded him of Central Otago.

"I remember being in Central Otago in the early '70s and seeing all these stacked stones, which the locals said had been created by Chinese goldminers. I was absolutely fascinated by all the labour that must have gone into it."

In Illustrious Energy, key character Chan and older friend Kim are prospecting for gold in 1895, having been in Otago for 12 and 27 years respectively. Stuck there until they can pay off their debts and return to China, they work their claim while enduring racism, threats, isolation and extreme weather. It's not all bad, though; Chan discovers romance when a circus visits the area.

Narbey says the film is testament to an overlooked group in New Zealand's history.

"I thought it was fascinating. There were so many Chinese in that area. Once the easy gold went, a lot of the goldminers left and there were these half-abandoned mines that still had gold. That's when it was suggested that Chinese be brought out.

"It is a simple tale, a universal tale of love, bonding, survival and being separated from your home town. Obviously, there is plenty of metaphor there, of humanity struggling on the rock.

"We started with the intention it would be a documentary-drama but got rejected by various people. Martin and I wrote it together; he'd come over from Sydney for a few months, then leave and we'd resume several months later."

Filmed on a range of sites, including Conroy's on the outskirts of Alexandra (where an old stone hut was partially restored) and in Cromwell's old town, Illustrious Energy also offers its own historical context.

As the film-makers were attempting to reconstruct history, archaeologists, too, were racing to excavate and document historic sites before they were destroyed by the Clyde dam project.

(The Government passed the Clutha Development Empowering Act in 1982 to authorise the Clyde scheme; the dam was completed in 1990, but lake-filling and scheme commissioning were delayed while a number of landslide issues were addressed; filling of Lake Dunstan commenced on April 19, 1992, and proceeded through four controlled stages until lake-filling was completed in August, 1993; the lake covers an area of 26 square kilometres and raised original water levels by 60m.)

"I think back on it and it's remarkable we had the opportunity to make that film," Narbey says.

See it
• Illustrious Energy will screen at the International Film Festival in Dunedin on Wednesday, August 10.
• Leon Narbey will introduce the film then answer questions following the screening.
• Leon Narbey is also giving a free public lecture on Thursday at 12.15pm at the Dunedin School of Art, Albany St, Lecture Theatre P152.