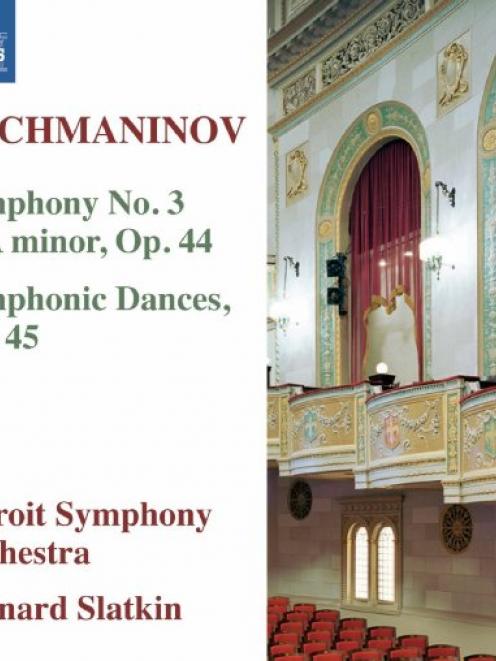 Leonard Slatkin conducts this splendid US orchestra in the two last orchestral works (Op.44 and 45) by the Russian composer.

Symphonic Dances might well have been named as his fourth symphony, as both these works have three movements truly symphonic in character.

The pair were given their first performances in the US during Rachmaninov's final period of exile, and he considered the Third Symphony (in A minor) one of his finest works.

However Symphonic Dances seems to aptly finish and sum up his whole career, blending intense rhythmic energy with rich romanticism.

The dances (movements representing midday, twilight and midnight) end with dramatic loud strokes of a gong progressively trying to overpower the orchestra - definitely winning the bout in the last bar.

This performance allows the instrument to reverberate triumphantly after the orchestra has finished, even developing its natural crescendo of spectacular sound.

The composer did not mark whether this effect should be damped and this is indeed a convincing thrill to the ears.

The opening dance features a melody from an alto saxophone in its middle section that is rather swamped in the recording balance.

In the first movement there is a quotation from Symphony No.1, which had a disastrous premiere in Russia, was destroyed by Rachmaninov, and its score reconstructed after his death.

In Symphony No.3 there are also a few balance problems, particularly with important muted horns struggling to be heard in one part.