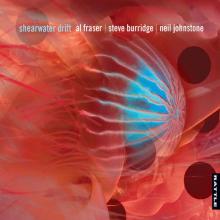 The shearwater is a bird, my dictionary informs: one of several long-winged petrels of the genus Puffinus that appear to shear the water with their wing tips when flying low. Perhaps more interesting is that Wikipedia shows there was a tightly focused indie rock band formed in Texas in 2001 called Shearwater Drift that this group of New Zealand musicians could be saluting? But there is a cool and calming cyclical aspect to this album, which begins and ends with birdsong from the two hemispheres of our globe.

This disc successfully mixes ancient and ultra-modern sounds, trying to portray a "slowly evolving, ethereal world, with pieces that express, reflect and explore non-linear time and memory as sound". One of the many explorations of sound here is the title track. Al Fraser is a major attraction as performer on traditional Maori instruments and on record once again in 18 short tracks. He is assisted by Neil Johnstone (recording, manipulation and composition), Steve Burridge (engineering), Ross Harris (accordion sounds on Tsitern), Nick Pilcher (piano on Ferrous Aro) and Robert Baldock (treated sea sample sounds on Cloud Shadow).

The team creates a vast "sonic collage" exploring real and imagined landscapes - some unique to New Zealand and some in Scotland. Listeners may invent their own interpretation of these pieces, but they measure up quite well to provide elegant and ornate soundscapes and the desired beautiful and "transcendent aural experience".