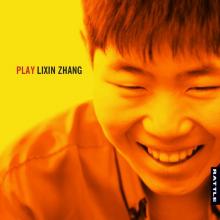 There he is in its "specialist music programme," where he plays both piano and violin.

Zhang began piano lessons at age 4, and has now passed his LRSM diploma with high distinction and attained a fellowship diploma certificate from the Trinity College of London.

Recorded in Wellington by Steve Garden, Zhang has chosen to perform a variety of 16 pieces that he loves and that express "true joy and happiness".

They range from three of Chopin's Op.10 Etudes and his Ballade No.4 to Four Concert Studies by the New Zealand composer Edwin Carr, the famous Liebestraum by Liszt, Rondo Brillante by Carl Maria von Weber, and Debussy's Feux d'Artifice.

We can also enjoy hearing Balakirev's arrangement of Glinka's The Lark, and the disc ends with two pieces by Ravel; Jeux d'eau and Alborada del Gracioso.

This is a fine programme that heralds the arrival on record of an exponent of new youthful talent that develops on New Zealand's musical scene - beautifully played.

Verdict: Serious play on keys by a young musician.