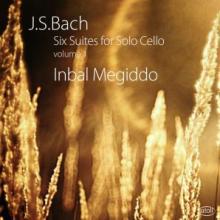 It is moving to hear great Bach harmonious invention. The composer's six cello suites are shrouded in mystery since it is not known exactly when they were written, for what instrument, or markings on lost original manuscripts. It is likely they were written between 1717-1723 and they are considered to be among the most profound of all classical music. It is a challenge for cellists to make their interpretations, and they have been performed by many renowned cellists including Pablo Casals, Rostropovich, Tortelier and Yo-Yo Ma.

Three of the six suites are played on this disc by Megiddo, who studied at Yale University, has given many concerts in Europe, Asia and the United States, and is now head of cello studies at the New Zealand School of Music in Wellington. They are effective performances, saluting the sublime search for beauty in music. The suites all achieve the effect of three to four-voice contrapuntal and polyphonic music in their musical style. They all begin with a short prelude and have five other movements based on dance forms.

Suite No.1 has a popular prelude with arpeggiated chords (6million views of Rostropovich's version on YouTube) and a bright gigue. Suite No.2 explores the whole range of the cello, from highest notes to deep and dark ones, with a scale-based cadenza movement and its brooding sarabande is a heart-breaker. Suite No.3 is more friendly and relaxed in C major, with the lowest note (bottom C) often the foundation for a chord. Its courante and two contrasting bouree movements show the emotional depths that a cellist can conjure up for the master composer.