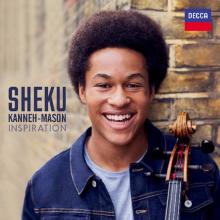 This album was released just before the performer became internationally renowned as cello soloist at the recent Royal Wedding. Kanneh-Mason already had a reputation in Britain as winner of the BBC Young Musician competition in 2016. The album title comes from him being inspired by the great names in cello history, such as Pablo Casals, Jacqueline du Pre and Mstislav Rostropovich, as well as his teachers. Its contents are themselves inspiring, as they show the young man exploring the sounds and colours of his circa-1610 cello by Amati in a diverse programme.

Shostakovich's Cello Concerto No.1 is the jewel of the programme, with its range of miniatures and the cadenza, in which there is a breathtaking show of virtuosity. The same composer's Nocturne from The Gadfly Suite is also very appealing. In a more popular vein are Bob Marley's No Woman, No Cry (in Sheku's self-arranged version) and Leonard Cohen's Hallelujah. Sheku also demonstrates the utmost expression and vibrato in the Saint-Saens favourite The Swan.

The disc opens with Evening of Roses, a Jewish folk song, and also includes two works by Casals: Song of the Birds and Jacqueline's Tears (referring to Du Pre) from Offenbach's cello suite Harmonies des bois, as arranged by Werner Thomas-Mifune. The CBSO (conducted by Mirga Grazinyte-Tyla), especially its cello section, assists most capably in the recital. The recording acoustic seemed not as sharply defined as usual, flattering the warmth of tonal performance perhaps, but mellowing some fast and furious virtuosity.