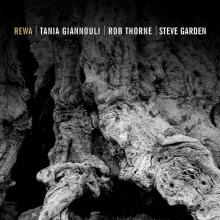 This album has taken two out of 11 slots in the European Jazz Media Charts for this July. Giannouli is a highly trained and accomplished pianist and composer who performs throughout Europe, and a skilled improviser. She plays here on normal keys and strings as well as "prepared" piano. Thorne is probably New Zealand's leading (certainly most adventurous) exponent of nga taonga puoro, the ancient instruments of Maori. The pair met in Greece last year and made recordings over two intense days.

The extra magic ingredient comes from Garden's talents in making resonant "sound collages" from the recordings and his own treatments, plus the mixing and mastering. Rattle has produced an expressive 11-track musical concert that weaves a remarkable bond around the two ancient cultures of Greece and Aotearoa. There is an air of mystery and magic in the mostly slow and deeply reflective sounds.

The opening tracks are adorned skilfully with quiet echo effects and throbbing deep bass that impresses. Dark Star is visited with reverence in two explorations. All the Maori instruments play their tones effectively (even some deep breathing), with additional sound effects in the mix. Then comes the bold finish (with some distant thunder) in Te Tangi A Mutu. It was a brave experiment from these three musicians, one that seems to unite the long history of two different cultures from opposite sides of the globe. The sounds can be equally defined as "classical" or "jazz" of a serious kind. Take your pick.