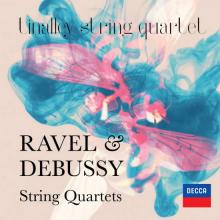 This is an Australian quartet that has gained international praise - Adam Chalabi and Linda Delbridge (violins), Justin Williams (viola) and Michelle Wood (cello). It won the ninth Banff International String Quartet Competition and has toured through Australia, Europe, Canada and the United States. At home, the group is now the "ensemble in residence" at the University of Queensland, and it presents an annual concert series in Sydney and Melbourne, as well as performing at many festivals.

Making its first appearance on the Decca Classics Australia label, the group plays these masterpieces of chamber music written by Claude Debussy (Op.10) and Maurice Ravel, the two French composers who responded wonderfully to the artistry of the impressionist art movement - although they both rejected that label.

Debussy finished his G minor string quartet in 1893, and it was written in unique free form. Within the customary four movements he uses a motto theme, cleverly transforming in various ways to paint a lively picture of Paris. I enjoy the delights of Ravel's F major quartet (1903) even more - in the traditional formal structure he has exquisite melodic writing that reminds us of the lightness and deft techniques of the impressionist painters.

While conjuring up thoughts of Paris, both composers used exotic sounds and rhythms of Spanish dances freely with masterful dynamics. These are embraced well by the Tinalley Quartet, which was previously praised by Strad magazine and others for its CD release of Haydn's Op.20 quartets. This also makes for delightful listening - beautiful tones, well played and balanced - bound to make an impression!