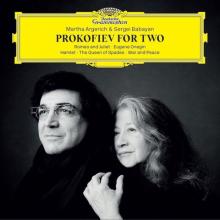 From twins Christine and Michelle Naughton playing Mozart on two pianos with the NZSO and the piano duo Anderson and Roe using their four hands on one piano earlier in the year for a Chamber Music NZ recital, Dunedin has been treated to brilliant keyboard performances.

This CD is another treat, featuring Argerich, one of the world's top pianists, with partner Babayan, who has transcribed several works by Prokofiev for two-piano arrangements (all dedicated to Argerich).

Its big feature is 12 movements from Romeo and Juliet occupying 35 minutes, followed by six other short pieces by the Russian composer. The brilliant colours and range of moods in orchestral versions of Romeo and Juliet invite arrangements and this is a scintillating version.

The rest of the disc is also first-class - a seven-movement suite transcribed from Prokofiev's incidental music for Hamlet and Eugene Onegin, the opera War and Peace and the film score for The Queen of Spades.

The performances are technically brilliant and I suspect the composer would be pleased with Babayan's work as arranger. He was helped by his experiences as a conductor who performed much of the material. His familiarity with Prokofiev's compositional techniques and instrumentation, as the accompanying booklet notes, has ``captured and recreated the score's distinctive note of irony, naivete, melancholy and sometimes brutal sarcasm, while drawing on the specific resources of the piano''.

The booklet points to the importance of Prokofiev's piano music in Argerich's long career. The highly virtuosic Toccata Op.11 was in her repertoire when she won the Busoni Competition at age 16.