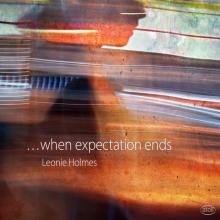 This is an interesting eight-track album that features chamber music with solo and mixed-ensemble works by Auckland-based composer Leonie Holmes. Over the past two decades, she has lectured in composition and music studies at the University of Auckland and written music for orchestra, chamber, vocal and solo instruments, writing many works for schools and community groups because of her strong interest in music education, stemming from being a composer-in-schools in the 1990s.

The opening work is the album’s title and was commissioned by the NZ Trio in 2014. It is played by them — a deeply sombre, reflective work questioning the theory "peace begins when expectation ends". It is followed by two members of that trio playing solo works: cellist Ashley Brown in the richly melodious The Fourth Station and pianist Sarah Watkins conjuring the impressionist Nocturne. Watkins plays again with bassoonist Ben Hoadley, Eric Lamb (flute) and Andrew Uren (clarinet) in the clever romp of Is there anybody out there?. The Estrella quartet with eight hands divided on two pianos also enjoyed itself in A Tedious Brief Scene: Bottom’s Dance, followed by the Strata Quartet playing Fragment II for string quartet.

Last, but not least, we hear Zephyr Wind Quintet play Ritual in sonorous tones, and the unusual pairing of viola (Robert Ashworth) and percussion (Eric Renick) delivers the complex, but very effective Recitative II, with its, at times, frenetic passages and complex metre changes where we find some pleasant surprises.