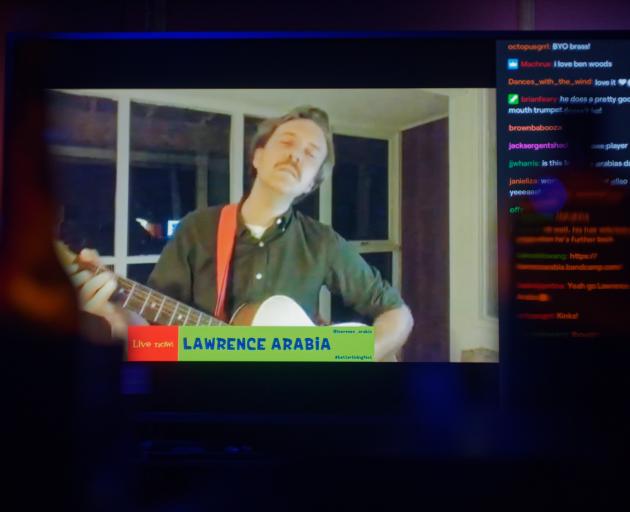 Lawrence Arabia performs during last weekend’s Better Living, Everyone livestream festival. PHOTO: FRASER THOMPSON
After a few weeks of figuring out the new normal, last weekend demonstrated that the local live music scene is far from dead — it’s just different now, pretty much like everything else.

When I "arrived" at Better Living, Everyone, Christchurch’s relatively long-running music festival put on by local indie label Melted Icecream, I was sitting in my bedroom in front of my computer screens, RGB room lighting set to Tropical Twilight. I’d arrived fashionably late, Pickle Darling was cross-fading into Mousey, but the night was still young; 13 more acts were yet to play.

Oscar Mein, of Dunedin’s very own Soaked Oats, was next, playing a neat wee solo set on guitar and keys, while his band-mates offered moral support from a Zoom room behind. The video quality was, ironically, porridge, but it didn’t really matter as the audio was fine. In fact, at no point was audio an issue, and this is coming from a real audio pedant.

Ryan Fisherman jacked the production values up a notch next, performing in front of a dazzling display of mirrors, each reflecting a different Ryan Fisherman. Which was the real Ryan Fisherman? I doubt even Ryan Fisherman himself could say for sure, but he delivered a stellar country-tinged performance.

He wasn’t the only one to make an effort on the visuals either. Oli Devlin, of Hans Pucket, performed from a meticulously decorated bathroom with a glowing bathtub, Vincent H.L put up fairy lights ... it helped drive home that this wasn’t just another livestream, this was Better Living, Everyone. It felt significant and important because everyone involved believed it was.

It was about this time that I moved to the living room. The beer started flowing, my bubble-mate turned up, and the RGB room lights moved to Arctic Aurora. The audience was chatting away happily in the live text chat, little in-jokes and memes were developing. The internet’s trademark toxicity didn’t seem to rear its ugly head either, people seemed genuinely stoked to be there and thankful for the artists’ performances.

The headliner for Friday was Lawrence Arabia, who was really good, and then things started getting fizzy. We got some refreshing hip-hop from Ferby, which was unfortunately hit by some technical hitches, then Hot in the City capped off the night with a DJ set featuring high-energy shadow-dancers behind a sheet.

And that was just day one. Saturday was another huge line-up of performances. Highlights included Lucy Hunter’s haunting piano pieces, Danny Brady’s infectious synth set, and, of course, Marlon Williams. Around 1300 people turned up for his performance which was, unsurprisingly, really good.

It made Sunday’s abysmal One World livestream viewed by millions all the more embarrassing really ... celebrity egos were stroked. Too many American talk show hosts said too much. Paul McCartney sang Lady Madonna while stock images of doctors faded in and out around him.

In contrast, Better Living, Everyone felt comfortable, collaborative, and it captured some of that exhilarating feeling you get at a really good gig. The calibre of the performances was top notch, with just enough awkwardness to remind you that it’s live. It felt important, and set the bar for future live events over the next few months.