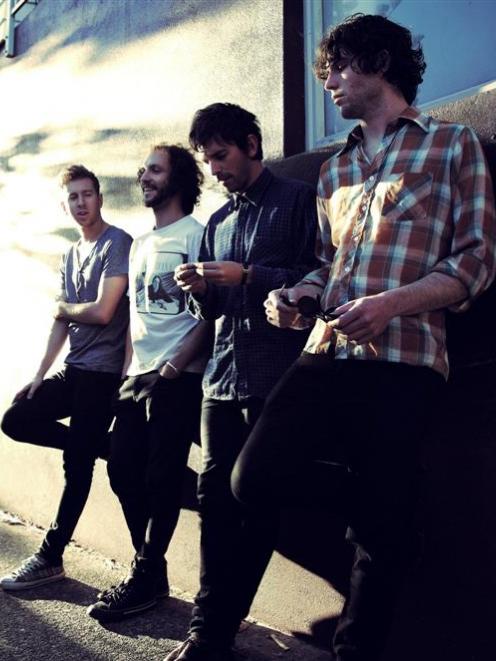 Knives at Noon.
Dunedin band Knives at Noon have gone from pub rockers to a band that still plays in pubs, but now has the comfortable backing which comes with being signed to a major label.

"We have been with Liberation for around eight months now, so being with a label is still pretty new, and all is going very well."

"Most of our shows are up north these days, and so we are really looking forward to playing to a home crowd ... and then being able to go home to our own beds after the show." Wilson says the band is hard at work on an album.

"The current plan is to finish the album, and to produce something we are proud of. So far we have only properly released four songs, so the ... album is a much bigger statement about who we are, and what we are trying to achieve musically. We are also in the process of planning the next music videos ...

"We have been recording with Dale Cotton here in Dunedin, and still feel we are developing musically, and want to go out with something unique - something that contributes to music, and not just replicate existing styles and sounds ... the focus is on exploring the emotional capacity of each song through texture and dynamics. Sometimes we spend hours running sounds through vintage speakers, recapturing them through analogue gear - basically trying to make interesting sounds. It's very time-consuming, but also very rewarding."

- Knives at Noon play ReFuel on April 13 , with support from Arcacend and Matt Langley.

She is on the way to a series of shows in Japan, which she believes may be affected by recent events.

"I head overseas to tour Southeast Asia and (supposedly) Japan solo and Europe with my band and possibly settle for a while. There are a few things going on in Japan swaying my decision on whether to go. If I don't I'll miss out on the opportunity to record with a record label in Tokyo ... or it could be postponed. I also have a full seven-date tour of Japan that might be compromised ...

"I have a UK passport so will be gone a while, hoping to ... continue songwriting in exotic places ...

"I am also coming down to Dunedin as I've been working at Massey University in the fashion department for the past four years ... so I'm going to dabble in a bit of NZ fashion."


• Who she is
The performer Justin Timberlake describes as: "The best singer in the world right now", has announced a visit to Aotearoa.

Jessie J is booked to be in New Zealand on May 6 and 7.

But who is this 22-year-old Essex songwriter?

- She was a child theatre star, making her stage debut in Andrew Lloyd Webber's West End Production of Whistle Down the Wind.

- At 17, Jessie signed her first publishing deal, after a song she wrote appeared in a commercial.

- She is very health-conscious after suffering a minor stroke at age 18.

- She co-wrote Party in the USA for Miley Cyrus.


• Brockville express
Shayne Carter (above) digs deep into his back catalogue, playing songs from the Straitjacket Fits and the Double Happys, unleashing Randolph's Going Home and maybe even Bored Games' Joe 90 in a gig called "The Last Train To Brockville" next month.

Venues are Wellington's Bar Bodega, on May 6, then the Kings Arms in Auckland a week later.

A limited edition Last Train To Brockville CD with tracks hand-picked by Carter is available when purchasing tickets online. Go to www.undertheradar.co.nz.


• Album launch
Meanwhile David Kilgour and the Heavy 8s are releasing their new album Left By Soft late this month. See them at The Empire on May 7, with special guests. Pre-sale tickets from undertheradar.co.nz.