The art of conducting classes 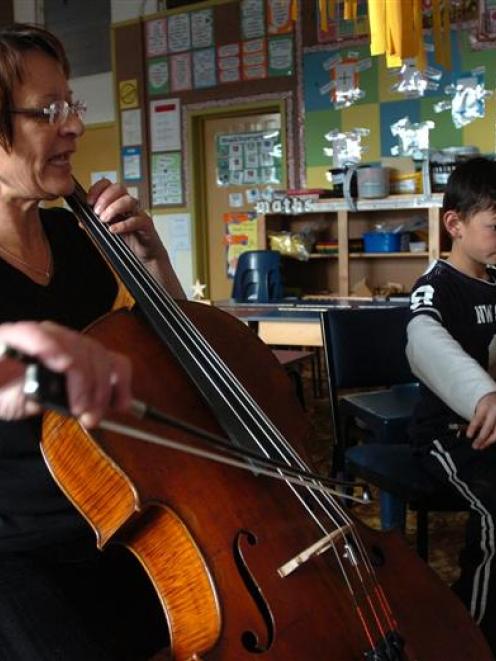 Tutor Dora Wilden-Green and Yugen Miyahara (9). Photo by Peter McIntosh.
A musical instrument is a friend for life. It will be a hard-won relationship, but persevere and it will never stop rewarding you. Nigel Benson looks back on 40 years of Saturday Morning Music Classes, while photographer Peter McIntosh captures the action.

Like so many Dunedin people, I learned to play an instrument at Saturday Morning Music Classes.

Sadly, I wouldn't know one end of a clarinet from the other these days.

But, that's the way it goes. You practise or perish with musical instruments.

It's a regret, though.

I would love to be able to play an instrument and envy those who can.

Musical ability is something you carry with you through life.

It offers the possibility of beauty, pleasure and escape at any moment.

Mr Buckton came to Dunedin in 1967 and was responsible for music education in nearly 200 Otago primary schools and 40 secondary schools.

He was passionate about encouraging children to learn musical instruments.

SMMC was originally established in King Edward Technical College, before being transferred to George St Normal School, where it remains today.

Classes were originally aimed at primary school children, with the Dunedin Youth Orchestra later being established for secondary school musicians.

An instrument hire pool was also established, so pupils could have access to instruments for very little cost.

One such, Bayfield High School head of music Aart Brusse, has been largely responsible for keeping the flame alive over the past 40 years.

"We have about 700 children involved locally now. Which is quite amazing, really.

"All of the schools and school principals support it really well. Everyone realises that it's quite special," she says.

"We will always be able to touch the lives of young musicians by introducing them to the joys of music."

Mr Brusse (64) will be bestowed an honorary life membership of the organisation tomorrow in recognition of his contribution over the past 40 years.

"In my second year at uni, I decided I wanted to be a music teacher, rather than an agricultural scientist," he recalled this week with a chuckle.

"It was quite unusual back then for a guy to be a music teacher. But I've been teaching music ever since."

Mr Brusse and Mr Buckton both studied at Victoria University and later taught together at the Christchurch School of Music, where they conceived the model for Saturday Morning Music Classes.

Mr Brusse was at his first teaching post at Tokomairiro High School in Milton in 1968 when he became involved.

"It's survived really well. It's a very accessible way of starting out learning and participating in music," he says.

"A lot of people have come through it. It's been an incredible asset to this city."

It has also reached into the regions, with classes later established in Mosgiel, Alexandra, Wanaka and Cromwell.

Mr Buckton is now director of Te Puna Puoru National Centre for Research in Music Education and Sound Arts, based at the University of Canterbury.

Like so many former teachers and pupils, he will be in Dunedin for the 40th anniversary celebrations this weekend.

A highlight of the weekend will be in the Dunedin Town Hall tomorrow when he conducts the massed item concert, which has been held every year for the past 40 years to showcase the achievements of SMMC pupils.

The first massed item concert was held in the Dunedin Town Hall on Saturday, October 4, 1969.

Former pupils have travelled to Dunedin from around the world for the 40th anniversary celebrations.

For the occasion, London-based composer Christopher Norton has written Octagon Overture, which will have its world premiere today.