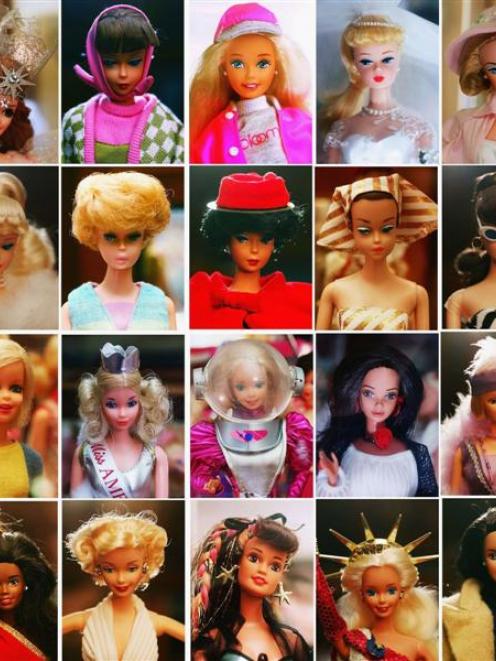 The photographs in this combination image of Barbie in many of her various incarnations were taken at the Leuralla New South Wales Toy and Railway Museum in Australia. Photo by Getty Images.
At age 50, Barbie is no longer what you would call a spring chicken. But she's still trying her hardest to stay hip.

To celebrate the five-decade mark, Mattel announced this week it was launching a logistical operation to stuff the next year with parties, partnerships and products talking up the famous doll.

"There's never been a brand like Barbie," the senior vice-president of the brand, Richard Dickson, said.

"This anniversary gave us a moment in time to unite all our pre-existing relationships and more with an epic marketing platform that truly will be unprecedented for us and the toy world. The 50th will be the trophy year."

Among the initial events, Mattel - based in El Segundo, California - is compiling a list of more than 50 top designers, including Diane von Furstenberg, Anna Sui and Vera Wang, who will present the first Barbie runway show at Mercedes-Benz Fashion Week in New York on Valentine's Day.

On March 9, event planner Colin Cowie is throwing Barbie a pink-splashed Malibu Dream House party at an actual beachfront residence decorated by interior designer Jonathan Adler. DJ AM is set to spin music for a roster flush with famous friends such as supermodel Heidi Klum.

For years, the 29cm doll held an almost freakish grip on the imaginations and aspirations of young girls across the United States and provided endless fodder for sociologists and artists.

The brainchild of Ruth Handler, mother of Barbara and Kenneth and wife of Mattel co-founder Elliot, Barbie made her debut at the New York Toy Fair on March 9, 1959. Since then, the doll has evolved through thousands of incarnations and 110 careers.

On average, three Barbies are sold each second.

Which is why the brand is opening its first flagship store in March with a six-storey "retail-tainment" mecca in Shanghai that also features dining options and a spa. The National Barbie Doll Collector's Convention in Washington, DC, from July 7 to 11, is already sold out.

In addition to exhibits and boutiques at Parisian store Colette and New York's Bloomingdales, Barbie will be showing up on or inspiring specialised cellphones, luxury jewellery, stationery, candles, cosmetics from Stila, hair driers, candy bars and decor pieces from Jonathan Adler.

A coffee-table book chronicling the history and fashion of the doll, The Barbie Book, by Assouline, is going for $US500 ($NZ940), while Bloomingdales will display 188cm mannequins designed by Rootstein. So the next step would be a movie, right?

Mr Dickson had this to say: "We are navigating that opportunity very carefully and am very interested in bringing Barbie to the big screen when we feel appropriate."

For now, the Barbie squad seems content to invade the Internet. At age 50, Barbie also officially will be on Facebook. - Tiffany Hsu