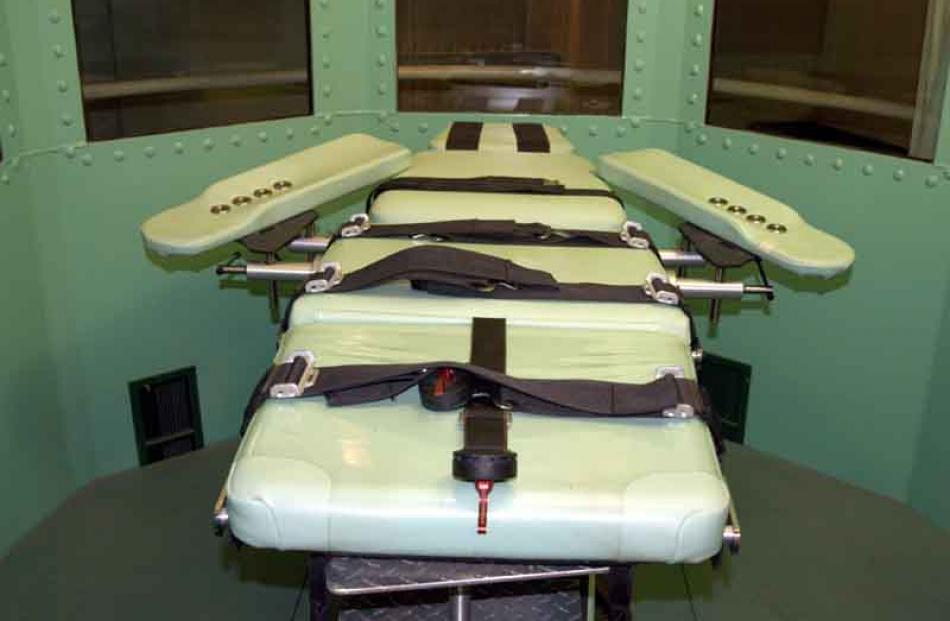 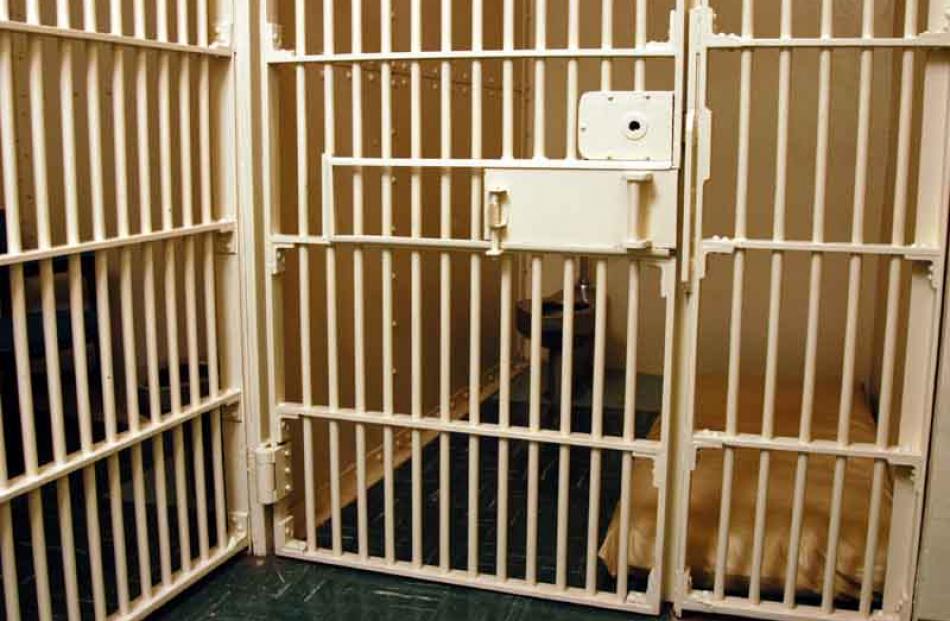 The condemned holding cell in the "death house" at the Walls Unit. 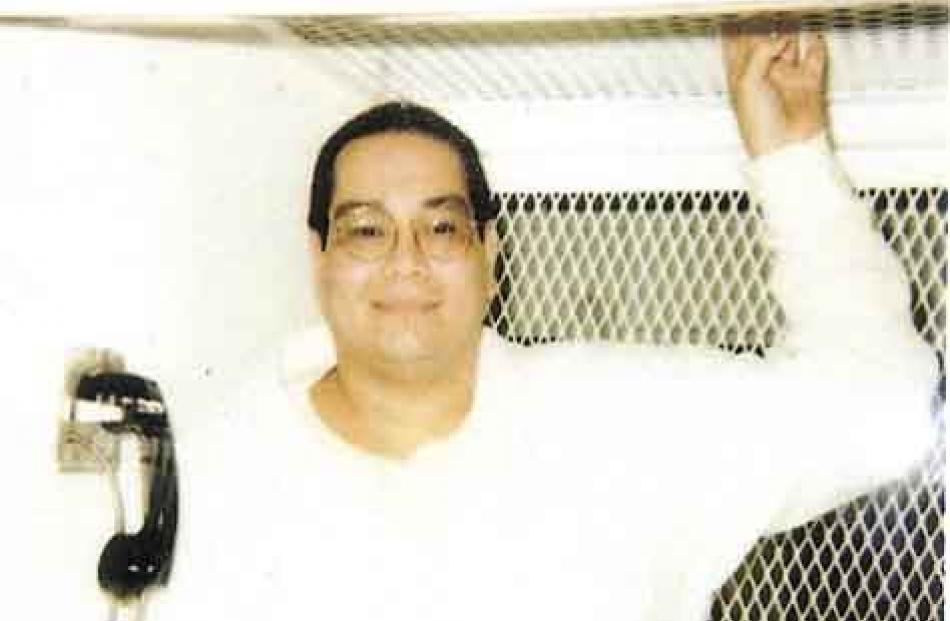 I first got to know Charlie Flores about a year ago. We have been writing regularly ever since.

"Delayed conversations," he calls our letters.

I've never met him and am unlikely to. For Flores is death row inmate # 999299 in the Polunsky Unit in South Livingston, Texas.

I first learned about Flores after he wrote a book, Warrior Within, about his life on death row.

There is a bed, a narrow window, a stainless steel toilet and that is it.

He tells me he can see birds through the window.

Flores (40) was convicted in 1999 of capital murder (murder which carries the death sentence) after an elderly woman was shot dead by two men during a burglary.

It is a charge he vehemently denies in his letters.

He insists he wasn't even there.

"I look back at my experience that put me on Texas death row and one would think that such a saga would be confined to made-for-Sunday-night television movies.

"Unfortunately, it is not," he says.

"There are things in my past that I regret and am ashamed of. I have been in jail before and I have used and sold drugs. And, when I learned that I was wanted for capital murder, I did the worst thing I could do - I ran. I knew that I would be sent to prison, or worse, forever and this scared me greatly. So, I acted impulsively and I ran.

"This does not make me guilty of capital murder.

"This does not make me the shooter of the deceased.

"In the end, I'm a man who was accused of a crime and never had a fair chance at proving my innocence.

"I was convicted and sentenced to die because of my criminal background, because I'm a brown man [Mexican American] and because I do not come from an affluent family who could pay for an attorney to ensure my rights were protected at trial."

The facts show that coloured, indigent, unskilled people are the most likely victims of capital punishment.

If you cannot afford good legal representation you're in big trouble.

"Ninety-nine percent of all death row prisoners are forced to accept government-appointed trial and appeal attorneys, who are, all too often, incompetent and ineffective," he says.

"Capital punishment means them without the capital get the punishment.

"Effective legal representation is of crucial importance. If the defendant on trial does not have competent enough [counsel] to challenge the government's evidence, the adversarial system of arriving at the truth crumbles and guilty verdicts are inevitable. When this happens, innocent or not, you will find yourself on a runaway train to the death house."

Once there, the machinery of death moves prisoners towards their end with an apparently detached lethargy.

The longest time spent on death row was the 24 years Excell White endured before he was killed on March 30, 1999.

The shortest time was the mere 252 days before Joe Gonzales was put to death on September 18, 1986.

Norms and normal behaviour are suspended.

Flores says he rises at 5am most days and does an hour's meditation.

"That is my favourite time of the day, when all the lights are out in this building and there is no sound, everyone is asleep and the guards are lounging around somewhere, not slamming doors and carrying on."

The rest of his day is spent reading, dozing, listening to the radio and writing letters.

Most days there is an hour of recreation in an outside yard, Flores says, followed by a shower.

The inmates take recreation separately and never have physical contact with one another.

For the other 23 hours a day, every day, they are locked in their cells.

Once death row wakes for the day, there is no peace, he says.

The clash of metal on metal is amplified by the surrounding concrete.

Inmates raise their voices, shouting back at the walls of their concrete tomb.

All this at least bears witness to the presence of life.

By comparison, the execution protocol is carefully designed to make the killing as clinical and detached as possible.

About two weeks before an execution, the prisoner is taken from the death row population and placed in a condemned cell in the "death house" at the Walls Unit, in Huntsville.

It is here that they will watch the last days, hours and minutes of their lives tick by.

On the fateful day, no visitors are permitted after 12.30pm.

About one prisoner in five declines the last meal. Others ask to have it donated to a homeless person.

The inmate is then allowed to have a shower and put on fresh clothes, if they want.

Shortly before 6pm, witnesses to the execution are ushered into rooms beside the death chamber.

There are two separate rooms, allowing the victim's and condemned's families to be isolated from each other.

The condemned is escorted by guards into the death chamber to a gurney, on which they are secured by thick, leather straps with their arms outstretched in the shape of a cross.

Some panic-stricken prisoners have to be forcibly carried to the gurney.

Two intravenous catheters are inserted in veins in the prisoner's arms, legs or hands by a "medical technician".

When the lines have been attached, a saline solution flows.

Lines containing the three chemicals that will end the prisoner's life lead from the gurney through a hole in the wall.

A technician waits behind a one-way window for the warden's command to activate the deadly apparatus.

Green curtains are then pulled back allowing the witnesses to view the final procedure.

A ceiling-mounted microphone is lowered down to the prostrate prisoner and they are invited to share their last words.

The procedure takes 15 to 20 minutes, while the poison takes about seven minutes to kill after it is administered.

The chemicals are introduced one at a time.

Sodium thiopental to sedate the victim, pancuronium bromide to collapse the lungs and diaphragm, and potassium chloride to stop the heart.

After the condemned is pronounced dead, the witnesses leave the two rooms and the body is immediately taken to a waiting vehicle and delivered to a funeral home for collection by relatives or the state.

The average stay on death row is 10 years.

Flores is living on borrowed time after 11 years on the row.

"This place will teach you how critical it is to have hope in your life when all is lost.

"If you have hope, if you have hope for a better tomorrow, for better things to come, then, when there is nothing else to live for, you have that.

"Unfortunately, I learned this lesson on Texas death row," he says.

"But here's the thing about long suffering: it is our most persuasive teacher.

"The lessons we learn while suffering we never forget.

"So, in that regard, I give thanks for everything in my life - even my suffering.

"I am convinced that I've been sent here to learn lessons that I would never have learned while free.

"All things happen for a reason, especially me being sent to this place.

"I think this was a way of life getting my attention and teaching me lessons I'd never have learned in the free world."

As removed as he is from that world, Flores still relies on the filtered glimpses that penetrate the prison walls.

"I could not do this alone.

"I could not survive if I had no friends or family that cared about me," he says.

For family and friends it is a living nightmare. Flores' elderly parents, Carter (72) and Lily (70), visit him as often as possible.

"My worst regret is being so selfish that I got caught up in this b******* that sent me here for something I didn't do and left my parents out there alone," he says.

"They're getting old on me and it is tough to deal with that."

The United States is the only Western democracy that persists with the death penalty.

In 2008, more than 93% of all known executions took place in China, Iran, Saudi Arabia and Pakistan and the US, according to Amnesty International.

It says more than two-thirds of all countries have now abandoned capital punishment in law or in practice.

The practice was temporarily abandoned in the US in 1972, after the United States Supreme Court ruled the death penalty was "cruel and unusual" punishment.

However, the ruling was circumvented within two years.

Since 1973, 138 people have been released from death row in the US because of evidence of their wrongful conviction, Amnesty USA says on its website.

Today, Texas is the most enthusiastic death row state, killing more than 450 convicts since capital punishment resumed in 1977 - more than four times as many as any other state.

A handful of states do not have the death penalty.

There seems little prospect of current US president Barack Obama taking on the issue in a country where polls show about 60% support for capital punishment - though support has declined in recent decades .

A Washington Post report notes that an Obama memoir says the death penalty "does little to deter crime".

But he supports capital punishment in cases "so heinous, so beyond the pale, that the community is justified in expressing the full measure of its outrage by meting out the ultimate punishment".

He was involved in reform efforts in Illinois that introduced mandatory taping of interrogations and confessions - a move opposed by prosecutors, police organisations and the state's then governor.

Flores continues his fight against death, desperately working with lawyers to have his case reheard.

Meanwhile, Dallas County prosecutor and death row advocate Rick Perry is up for re-election in November.

Opponents of the death penalty are hoping the election will usher change. 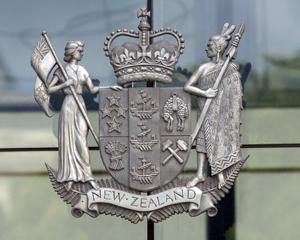