This year’s Otepoti Dunedin Heritage Festival, "Future of the Past" (November 19-21), brought to you by the Southern Heritage Trust and partners, highlights the sustainable conservation and adaptive reuse of heritage buildings. Historian Jonathan Howard takes a look at some examples.

While buildings appear to stand still, they need to move with the times to stay relevant. If they don’t, heritage places can become marginalised, risking deterioration, mounting repair costs and ultimately loss. To remain viable, even historic house museums like Olveston and Larnach Castle must adapt to improve visitor experience, access and safety.

Today there is a growing appreciation of how built heritage helps us understand our past and connect with its stories. Looking around, we see exciting examples of owners revitalising historic buildings. 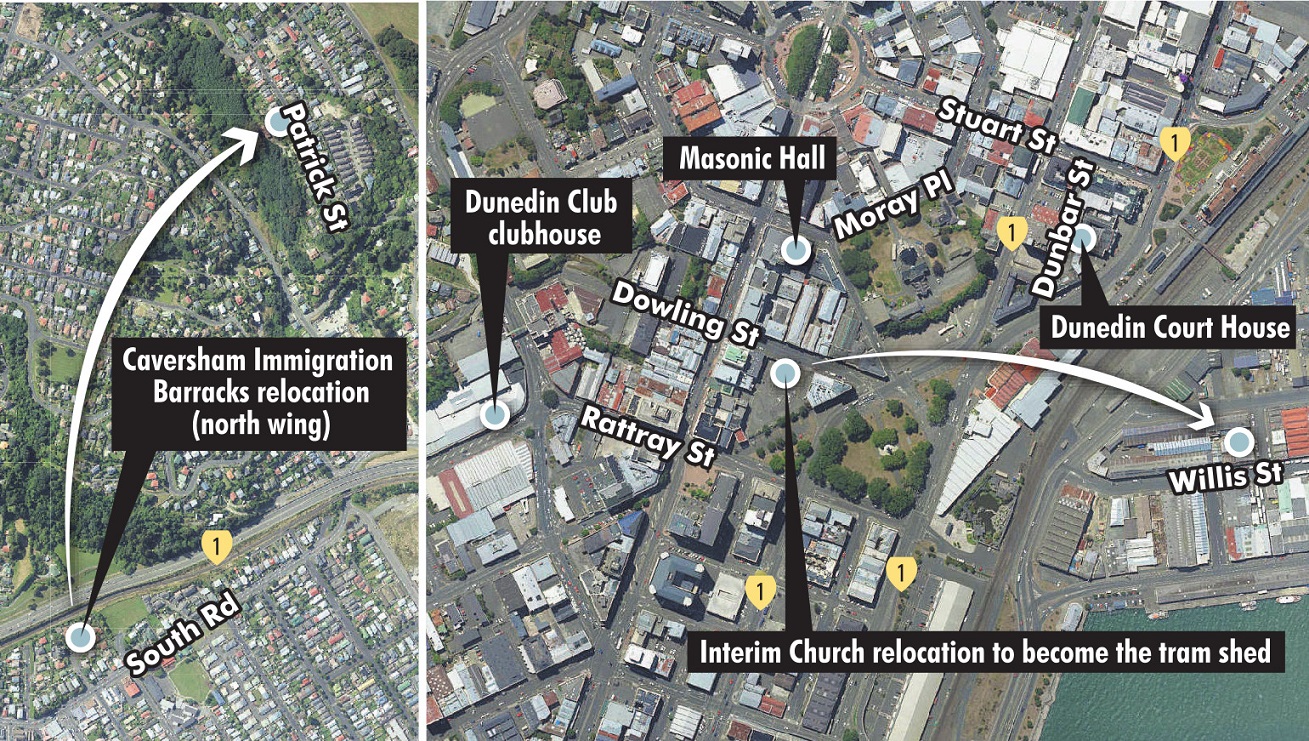 As well as preserving our cultural heritage, this helps save the planet. Adapting existing fabric conserves invested energy, breaking the wasteful cycle of construction, use, obsolescence, decay and demolition.

The heritage conservation sector, including local councils and Heritage New Zealand Pouhere Taonga, is here to guide change in ways that look to the future while safeguarding historic significance.

In days past, before heritage conservation was expected and supported, a building’s survival depended on its durability and functionality ... and a great deal of luck, in being at the right place at the right time, in the right hands. Looking back, here are five historic buildings challenged by social and economic change. (And by fire — check your smoke alarms! For more information on home fire safety visit www.fireandemergency.nz/at-home/) 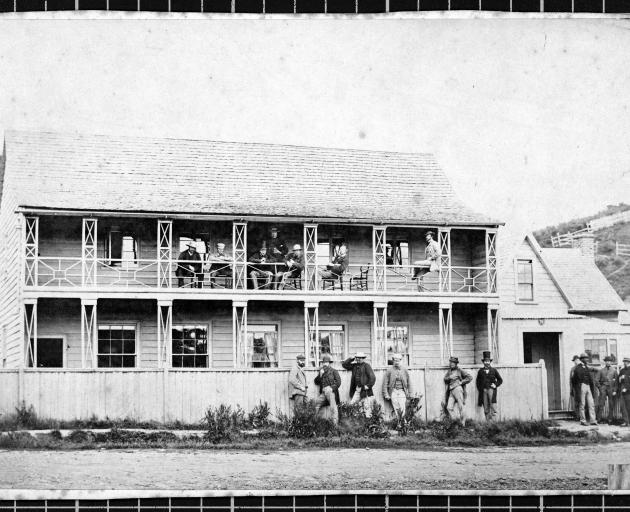 Built c.1850, this was the Dunedin Club’s first clubhouse (1858-62). Next it hosted an industrial exhibition to fundraise for St Paul’s Church (later rebuilt as the cathedral), sparking the idea that Dunedin should host the 1865 New Zealand International Exhibition. It became the Old Dunedin Club Hotel until 1865. Fire forced the Scandinavian Hotel to relocate here 1866-1877, after which it was shortened and later became a commercial laundry for Mee Lee and Kuong Sing Lee. Demolished 1912. 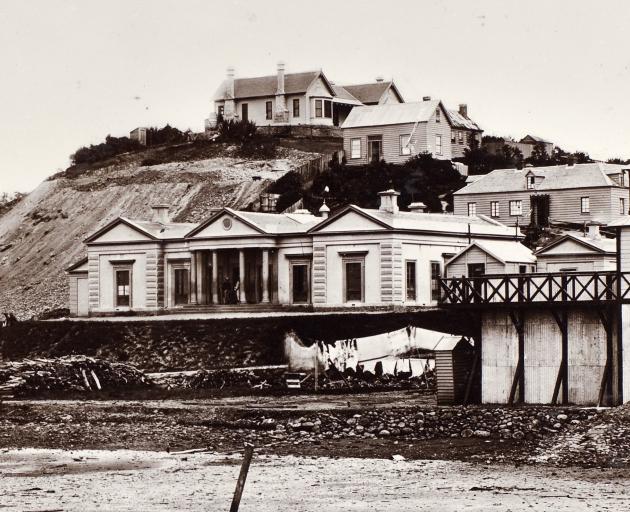 Dunedin’s first purpose-built courthouse (1859) closed in 1878 after the city outgrew it and the court was transferred to the former Provincial Council Building. The building almost became a temporary school before being converted to Railway Department offices in 1879. After surviving an 1863 fire, another in May 1880 caused its demolition. 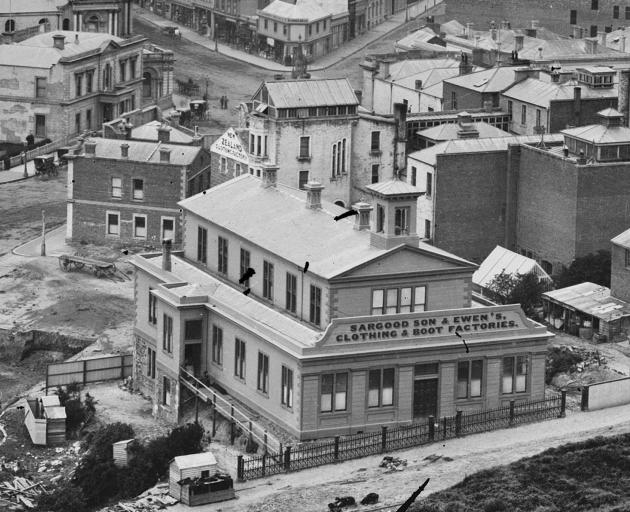 The current First Church on Moray Place (R.A. Lawson, 1873) is the fourth, replacing the first (1848) and second (1850). Delays in lowering Bell Hill required Lawson to design a reusable "Interim" third First Church (1865) on the present Dowling St car park. In 1874 it became Sargood’s clothing and boot factory. In 1878 it was relocated to a waterfront site as a tram shed. After miraculously surviving an 1865 fire, another destroyed it in December 1880. 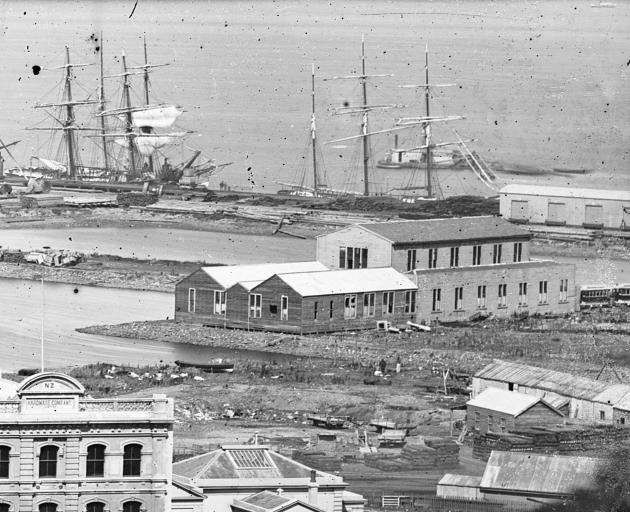 The Interim Church as a tram shed in 1879. Trams can be seen at the far right of the image. Photo: [A detail from] [Dunedin panorama], New Zealand, by Burton Brothers studio. Te Papa (C.012120) 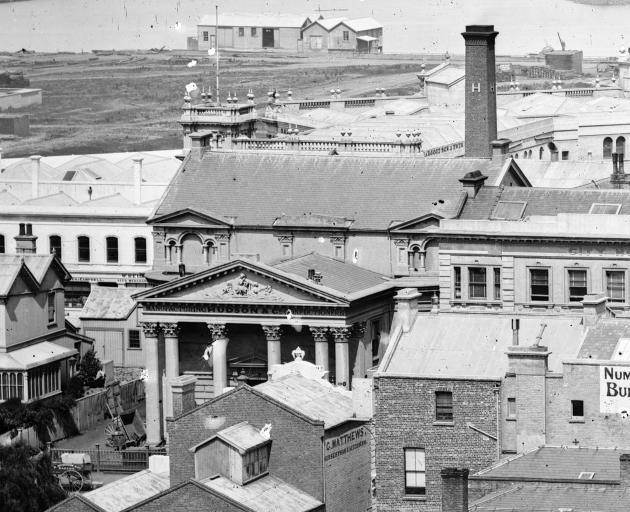 The Masonic Hall (William Clayton, 1868) stood on the south side of Moray Place by Burlington St. In 1873 the Masons sold it to Richard Hudson of Hudson and Co (later merged with Cadburys), who rented it back to them. Hudson used it for public concerts and even offered it as a school, before converting it to a bakery. In 1880 the imposing front portico was demolished for his four-storey Coffee Palace. In February 1881 fire destroyed the remaining hall. By then the Masons had bought the former Dunedin Synagogue in Moray Place (now a Category 1 historic place on the Heritage New Zealand Pouhere Taonga New Zealand Heritage List/Rarangi Korero: https://www.heritage.org.nz/the-list/details/9606).

Caversham Immigration Barracks (William Clayton, 1873) were built by the government to house hundreds of immigrants in four two-storeyed wings, segregated by class and gender. In 1895-1902 they became a match factory for NZ Wax Vesta Company Ltd, surviving a 1900 fire. In 1903 they were a temporary scarlet fever hospital. Sold by tender in 1905, the purchaser relocated the entire north wing to Mornington (shown above right), converting it to a row of semi-attached cottages. 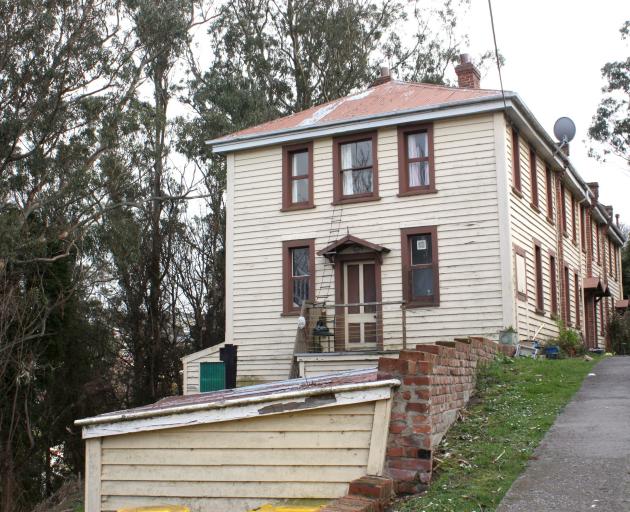 For more details on the festival events please visit https://www.southernheritage.org.nz/heritage-festival