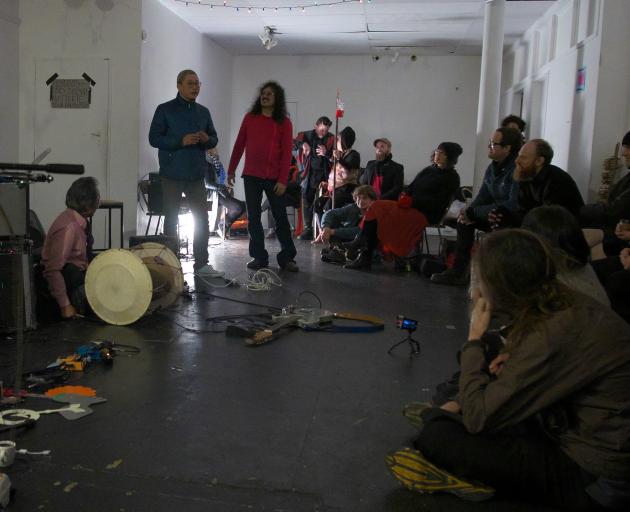 Bulgasari Aotearoa dropped into None Gallery for a gig in 2017.PHOTOS: SUPPLIED
A few weeks ago the art and music community received some sad news: None Gallery had been sold and, since it's new owners had purchased a cashflow opportunity not an art gallery, the residents had 30 days to collect 16 years of history and get out.

Founded in 2003 as a collaborative art space, the Stafford Street building included six huge bedrooms, studio spaces, a large basement and a gallery space. By design it's purpose was mutable; the "None" was to imply no fixed definition. It served as an incubator, a venue, a workspace, a support network and a home to the hundreds of artists who came and went over the years.

It's nearly impossible to capture the impact None Gallery had. It was the longest running artist-run space in New Zealand. The walls are literally coated in layers of art and life history. Pretty much every local artist or musician has some connection to None Gallery.

Erin Templeton, who now lives in Australia, was part of the group who originally leased the building and founded the gallery. From the beginning it was designed to be "a space to experiment and work on creative projects, that was free for the community/artists and musicians to access".

"We found a great building and asked others from art school and the music scene to get involved. Lots of people put a huge amount of work into eventually securing a lease and preparing the space," Templeton explained. "I didn't expect it to last this long! But it's testament to a strong community. I guess it's fairly standard for creative people to live with uncertainty when it comes to real estate."

Tania Price, another founder, explained the building used to be the headquarters for a pharmaceuticals and fertiliser company (Kempthorne Prosser) and a strip club after that.

"The building required a lot of work to get liveable and workable, so we negotiated the first month rent free in lieu of doing the work ourselves."

Various artifacts were uncovered in the course of the work that spoke to its earlier lives. Dunedin musician 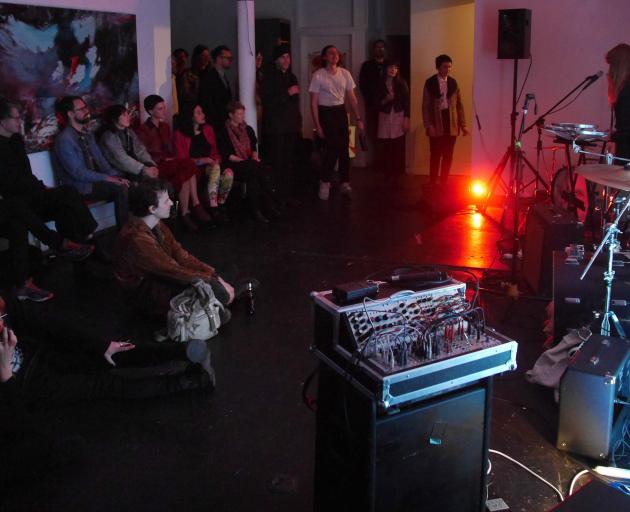 Ov Pain plays None Gallery in 2016.
Alastair Galbraith recalled going there as a child, when it housed a dog food/horse meat processing plant.

"I don't think any of us expected it to continue in that capacity for 16 years. I guess we figured it wouldn't be long before it fell to inevitable gentrification, as is the case with many of those buildings within Aotearoa."

Over time, the original residents moved out, and a steady stream of artists and musicians came and went, leaving with new artistic perspectives and directions.

Danny Brady was a resident for five years from 2012 and used a studio space for further two years.

During which time, he helped establish the gallery as a music venue, hosting bands such as Die! Die! Die! and Disasteradio, as well as rehearsing and recording with his band Death and the Maiden.

"Having so much space and freedom within that space made for some productive creative times. Being surrounded by other creatives was very influential.

"At times the building would consume you - fill any space with artists and things will at some point get a bit dark, which in turn would affect the art.

"I'm sure the influence people have got from gigs, performances and exhibitions will linger on with or without the building."

William Henry Meung, also a local musician, was a resident for two years and had been attending gigs since shortly after it was founded. He shares a similar sentiment.

"Every thing has its time, and None has been lucky to have had many times, various waves of exciting artists and events. The sword has been hanging over the place for as long as I have been involved. I guess, as an artist, you get used to operating in the spaces that open in often unstable, marginal or temporary conditions.

"The future is looking challenging for the Dunedin underground scene as developers pick off the last few remaining outposts of affordable studio space. Still, artists are resourceful, I have hope that people with energy and ideas will find away."

I myself discovered it comparatively late in its existence, but some of my most memorable gigs have been there. The first time I saw Ov Pain and Negative Nancies in 2016, Sewage's dual saxophone absurdity in late 2017, watching Brendan Jon Philip deliver a screaming barrage of noise as he slowly disappeared behind layers of fog ...

Art flourishes outside of commercial pressures and, while the recent resurgence of venues is great for some, it was nice to go to a venue where the main purpose wasn't selling alcohol.

Unfortunately, the cycle of gentrification means as soon as an area becomes known as an art hub, developers pounce. It happened to K Road in Auckland and it's happening here: Vogel St used to be cool, now it's full of cafes.

The real estate listing for 22-24 Stafford Street described the property as: "an exciting opportunity for further development ... very close to the heritage precinct area within the central city ... not Heritage New Zealand listed", which is basically to say you can take advantage of being near historic buildings, but you don't have to respect the history of this building.

It's also particularly interesting given that in 2016 the Dunedin City Council granted $5000 out of the heritage fund towards drainage and roof repairs - odd considering it's apparently not a heritage building. The new owners spent $625,000 on the property's four buildings and 14 car parks. It's hard to know what they have planned for it.