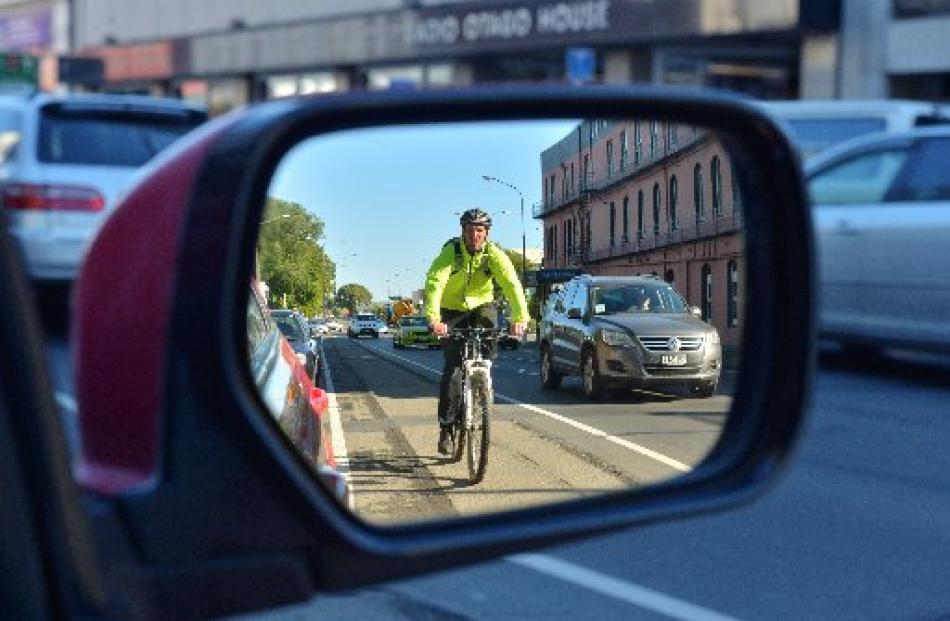 A cyclist makes his way along Cumberland St, Dunedin, in a cycle lane. 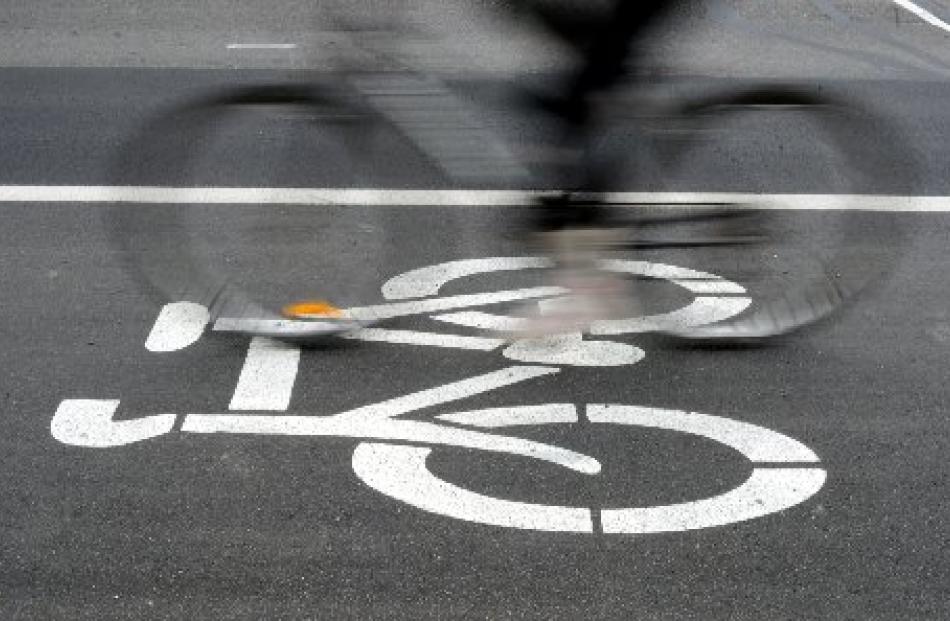 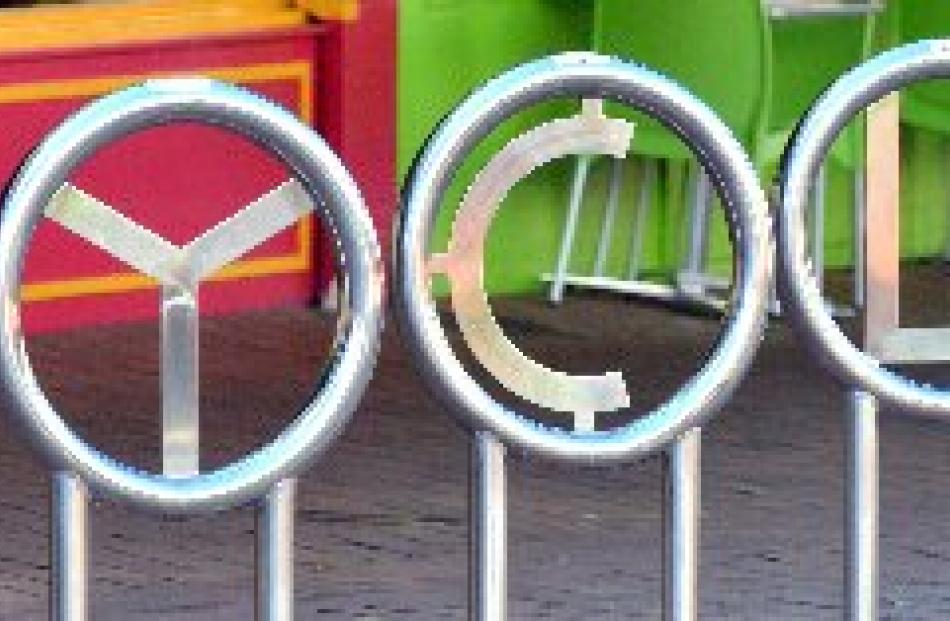 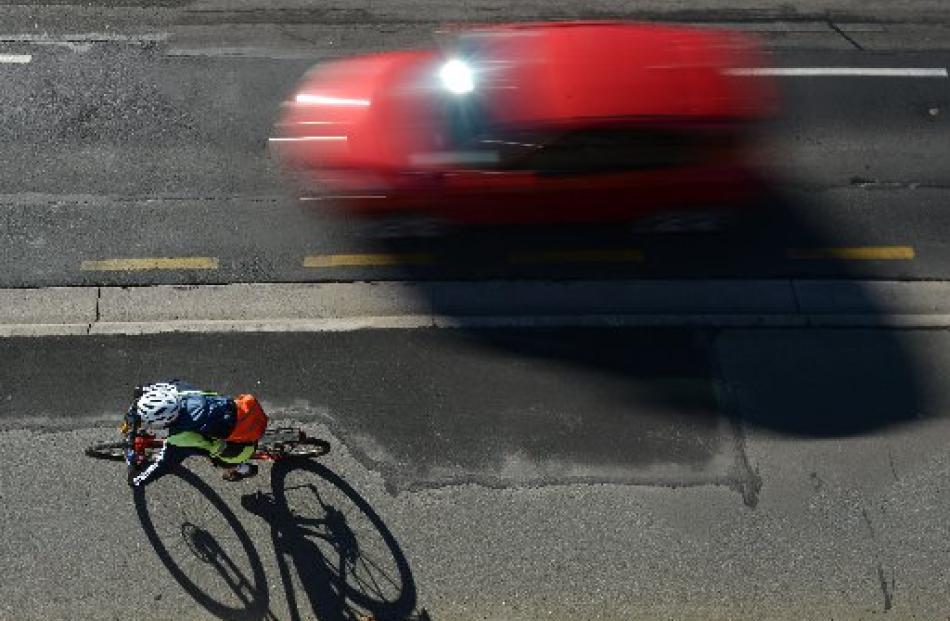 Separating the arguments from the red herrings is proving as difficult as separating trucks and bicycles in Dunedin's cycle lanes debate. Shane Gilchrist navigates a few angles.

Matt Dunstan has a shop on the corner of Lower Stuart St and Cumberland St, Dunedin.

His business is about as central to the city as it gets. Yet ask him if he thinks his operation might suffer as a result of the installation of a separated cycle lane and he'll probably tell you to get on your bike.

There are a few reasons for that. Firstly, and most obvious, is the fact Mr Dunstan runs Cycle World Dunedin. Still, before you cry ''vested interest'', hear him out.

Typically, he'll drive a car from his Tomahawk home to work three days a week, commuting by bike the other two days.

As both a driver and a cyclist, he has some ''close calls'', he reflects.

''One time a rider hit a rock and swerved in front of my car. That was just as scary as being on a bike. The fact I could have hit someone was terrifying.

"I know a lot of cyclists who train in various parts of the city or ride into town and they often talk about how dangerous the one-way roads are.''

Those fears are grounded in fact.

There have been three cycling fatalities in Dunedin since 2003, two in the past two years: Peter Wells died after being hit by a logging truck near the Anzac Ave intersection with Castle St in November 2011; and Dr Li Hong ''Chris'' He was hit and killed by a stock truck on Cumberland St a year later.

The result: the short-listing of two preferred options on the one-way sections of SH1 through the central city.

Estimated to cost $3.5 million and $4.5 million, fully funded by the NZTA, both involve cycle lanes separated from motorised vehicles by some form of barrier on the right-hand side of the road between the footpath and traffic lanes.

Option one, favoured by the working group, features a uni-directional (one-way, with cyclists riding in the same direction as the traffic) ''Separated Bicycle Facility'' running along Cumberland St from Queen's Gardens to the Botanic Garden, and another (the same distance) on Great King St.

The four-week consultation period, in which submissions have been sought on the preferred options, ends on Friday.

And they've flooded in, more than 1000 of them, according to Simon Underwood, the NZTA's cycle lane project leader.

''Cyclists, of all road users, are the most vulnerable. So anything that involves improving their safety becomes an emotive issue.

''First and foremost, this is about giving cyclists a safe choice within the city,'' Mr Underwood says.

He also emphasises the consultation process is important, ''because we need to be able to provide answers to the council and within the NZTA to three fundamental questions''.

And what do people consider to be the adverse consequences of a separated cycle lane, and to what extent can they be managed or mitigated?

In regards the latter, Mr Underwood is referring to concerns raised by councillors Lee Vandervis and Hilary Calvert, members of the business community and others about reduced parking availability, the potential cost of any changes to parking infrastructure (including revenue loss) and pedestrian safety, among other issues.

''This is primarily the DCC's camp, but my own view is that when it comes to loss of revenue through parking, I don't think that is a guiding issue.

"The cost would come through re-establishment of parking but, from a revenue perspective, it would balance out. I think the real issue is where the next closest parking would be.''

According to DCC transportation planning manager Sarah Connelly the preferred option is likely to be submitted for councillors' scrutiny in March, ''as well as parking options and a rough idea of cost for each''.

Should the council decide to proceed, the proposal would then be included in the NZTA's 2015-18 Land Transport Programme, within which there is separate allocation for walking/cycling projects.

''There are two key aspects to this,'' Mr Underwood explains.

''There is the community view: and that's why it goes to council. Then there is the investment view: whether the NZTA would get a safe return on money spent.

''Should this project proceed [to the 2015-18 Land Transport Programme], it will be assessed against other cycling projects nationally.

''I think there are a lot of good reasons why this project may succeed. But, at the end of the day, it will be up to the council and the agency as to what happens.''

Dave Cull, the Mayor of Dunedin, points out the reason why the council began this process in the first place: it's about safety on Dunedin's one-way system.

''Council, in collaboration with the NZTA, is both resolved and obligated to make our one-way street system safer. That's what we asked NZTA to do after the last death.

''And let's be clear: it is the NZTA's responsibility to make state highways safer,'' Mr Cull says.

''As far as parking is concerned ... well, if parking was getting in the way of the safer operation of trucks or other freight vehicles, you would move the parking.

"So what's the difference in trying to save cyclists' lives?''

''It will certainly require a budget as we go on. There might be some costs. I see Councillor Calvert had a letter in the paper this morning and I'm a bit bemused by that.

"On the one hand, she's arguing we don't know what the costs will be. Well, I'll tell you we do know the cost of death.

''It's not the best way to express this, but there is about $4.5 million of social cost per death.

''So if we have to move trees, put in berms, move parking ... those changes are just part of the effort to make this city safer. And Dunedin has the worst traffic safety record in the country.''

Mr Cull is referring to the Ministry of Transport report ''Motor vehicle crashes in New Zealand 2011'', released late last year, in which Dunedin recorded the highest proportion of crash casualties per head of population of all cities.

''Dunedin's unique in that our one-way system also carries a state highway system.

"There is a bottleneck in the middle of town with only three roads running through from the north to the centre of town: George St, Cumberland and Great King St, so the options are limited.

''We came back to six options on the road, which were then graded in terms of effects on motorists, parking and other factors. The only two that came out as really viable are options one and two.''

So the suggestion by Dunedin resident Calvin Oaten, former councillor Teresa Stephenson and others to revisit a ''quiet streets'' option, a meandering route incorporating north-end streets such as Castle, Leith, Dundas, Clyde, among others, and perhaps crossing the university campus is out of the question?

''The quiet streets is a bit of a red herring,'' Mr Cull says.

''It works in suburban areas, but the idea of a transportation system is to get people where they want to go.

''It's important to stress what the debate is about: it's about which of the two viable options are we going to have.

''The debate about whether we should have a cycleway network ... well, we've already had that in the sense that in the past three or four years, leaving aside the stadium, the most submissions we have had on the annual plan have been in regards cycling.

''There is a huge latent demand for better cycling facilities in our community.''

THAT brings us back to the first question raised by Mr Underwood, the NZTA's project leader: is there a demand for a separated cycle lane option (i.e. will the cycle lanes be used)?

And 59% either agreed or strongly agreed that ''more cycleways ... separated from traffic would encourage me to cycle [or cycle more]''.

When asked if the Dunedin City Council should spend money on constructing separated cycleways, 74% either agreed or strongly agreed (10% opposed).

''I can accept there is a variation within the People's Panel figures, but they still reflect a strong latent demand.

''This is not a process that has been rushed. It has been two years since Peter Wells was killed, a year since Chris He was killed.

The NZTA still has to go through all the submissions ... and people will have chances to put forward their views and concerns over a longer period of time. And that's a good thing.

''Clearly, the council has stated its overall support, so a direction is clear. However, if the council hadn't indicated where it stood at this point people would complain that they don't know what the council thinks.''

And then there is the question of the effectiveness of a separated cycle lane. In short, will it make it safer for cyclists navigating Dunedin's one-way system?

In 2010, the University of British Columbia published a review of research into the effects that changes in transport infrastructure can have on cycling safety; it identified five studies that showed the creation of dedicated bike lanes and routes, on average, halved the number of cycling-related injuries and crash rates.

And a 2012 American Journal of Public Health article showed that in Vancouver and Toronto dedicated cycle tracks had only 11% the injury rate compared to cycling on busy roads without bike facilities.

''What we see in overseas cities is that when the cycling infrastructure improves, the number of cyclists goes up but the rate of cycling injuries goes down,'' Prof Weiss says.

Spokes has been actively lobbying for option one (uni-directional lanes).

''I think a uni-directional lane is easier for people to visualise.

"Say you are on the right-hand side of the one-way system road and are going to pull out of a driveway; you are going to look left, because that's where the traffic is coming from.

"I think it's natural that drivers won't look to the right as instinctively.

''I also think it'd be easier for cyclists to pass one another on a uni-direction lane.

"It also promotes social riding and that is not a trivial thing.

"We have looked at other places and social riding is part of the experience.''