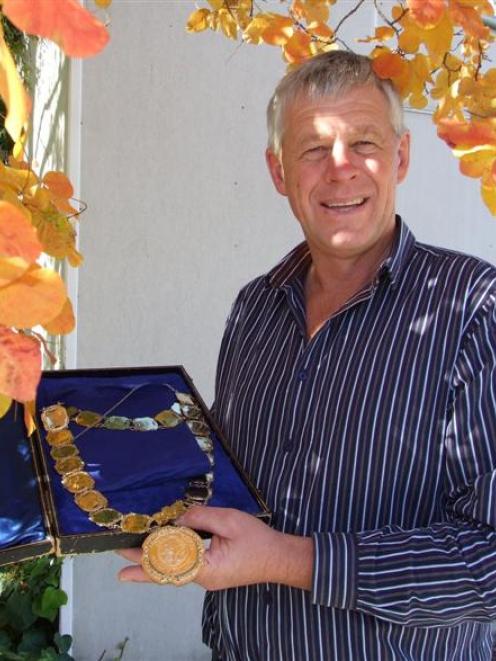 There are no Central Otago mayoral robes but there is a set of mayoral chains, which only have two names engraved on them so far - Bill McIntosh and Malcolm Macpherson. Tony Lepper says it is an honour to be able to wear the chains and add his name to them. Photo by Lynda Van Kempen.
It's a steep learning curve in the top job, but Tony Lepper is pedalling hard, Lynda Van Kempen reports.

Central Otago Mayor Tony Lepper admits he is still learning the ropes but says the mayoralty is the "the best job in the world".

"I absolutely love it, and I tell that to everyone I see ... it's just great.

"You're far more influential than you would have thought, looking from outside. But it's taken quite a bit of learning, so I'll get better at it. Every person wants to talk to you for the first three months and I got a bit snowed under there and it was hard getting back to people, but I'm getting better at that now."

Two hundred days into his tenure, he is happy with the progress made on some of the issues that emerged during the election campaign.

"Water-metering - I said in my campaign I thought we'd made a mess of it and I wanted to change some stuff. It came up on the first council agenda and the staff immediately looked at reviewing the water charges. So we're working on that, and it's going to take all year.

"The campaign heightened the issue. Yes, the [2010] council was going to embark on some of these things, but the campaign got people off their chuffs and got them interested and we've got that process started.

"We want to get more buy-in and we want the community to say this is how you are going to charge, and for them to accept it. I think they'll accept it more if they tell us what they want, rather than we tell them. That was always what I wanted."

Before the election, Mr Lepper said one of his goals was for the council to be more user-friendly and more customer-focused.

A recent review of the council's management structure revealed the council was "very poor at communicating with our public on how we were doing things", he said.

"We can do a lot better, and we're working on that."

Mr Lepper regularly goes to management team meetings and puts his views forward on how he thinks the place should be run and emphasises that staff should always have a customer focus.

Despite his commitment to the role, he is adamant it is a part-time rather than a full-time one.

"I've kept my worklife. I work until 11.30am most days [as an irrigation company manager] and I think that's pretty important. It keeps you well-grounded and keeps you in touch with your public. I don't think the mayor's job here is a full-time job.

"At this stage, I've kept my work as Sport Otago [chairman] and I think that's quite important too, to be perfectly honest. You have to have outside interests and being the mayor can help with that, just as your involvement on those outside interests helps you as mayor."

One thing that has remained constant is the reception he gets when he drops into his local watering hole at Clyde.

"The Clyde pub is still a safe haven; they've been used to me going there for 21 years, I guess, so they don't give me too much grief.

"There's been a bit of 'your worship' stuff going on when you're in the bar and we all joke about that, but they don't treat me any differently really."

His new role has meant less "spare" time but in March he still managed to complete his 15th Goldrush multisport event, as part of a team with his wife, Bernie.

"I was a bit lacking in training time, but it went OK."

More activity is on the agenda during a three-week holiday in July and August. He and Mrs Lepper will be part of a group biking from Land's End to John O'Groats in Britain, a distance of 1407km.

THE MAYOR
• Name: Tony Lepper
• Age: 54
• Council experience: 21 years as Central Otago District councillor, three terms as deputy mayor.
• Best thing about being mayor: A real opportunity to use the position to make change.
• Worst thing about being mayor: Nothing so far.
• Biggest surprise during this term: Being called your worship and realising they are talking to you.