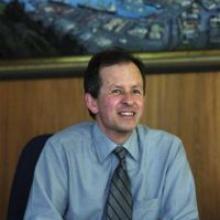 Port Otago chief executive Geoff Plunket attributes the increase in cruise ship numbers to the growing popularity of Dunedin as a destination. Photo by Peter McIntosh
It is full steam ahead for the lucrative cruise ship market, with vessel visit numbers to Dunedin next season expected to rise 57%.

This season, 42 cruise ships arrived, up from 39 the year before.

Port Otago chief executive Geoff Plunket said the increase reflected the popularity of the cruise ship market and Dunedin as a destination.

‘‘It is a growing part of our business. It is good for people at the port and it is great for the community.

The growth was especially welcome because of an expected decline in North American visitors, she said.

Because of the forecast growth, Tourism Dunedin has initiated a Dunedin Cruise Marketing Network beginning early next month.

‘‘We have to ensure we can manage the growth of this market,'' Mrs Hindson said.

A report released by Cruise NZ last year on the economic impact of the 2006-07 season revealed Dunedin was the third highest-earning New Zealand destination after Auckland and Christchurch.

Next season will begin with the scheduled arrival of Dawn Princess on October 22, 2008, and end six months later with the departure of the same vessel on April 22.

Among the vessels expected next season are Millennium (12 visits), Volendam (10) and Dawn Princess and Diamond Princess (six) and Oceanic Discoverer (twice).

The last cruise ship to visit this season is Sapphire Princess on April 22.