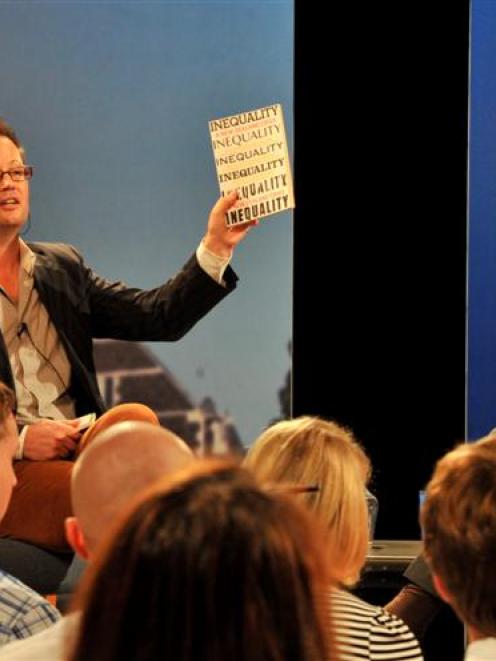 University of Otago politics lecturer Dr Bryce Edwards holds a copy of Inequality: A New Zealand Crisis, while in conversation with its editor, Max Rashbrooke, yesterday. Photo by Craig Baxter.
Public opposition to increasing benefit levels means no political party is likely to reverse the cuts that did most to contribute to income inequality, Max Rashbrooke, the editor of a book on the subject, says.

Inequality: A New Zealand Crisis was published last year and features different writers on the topic of income inequality.

Income inequality rose in the 1980s and 1990s. Since then, it had not moved greatly, and at some points slightly declined. Top income earners were hit by the 2008 financial crisis, but Mr Rashbrooke believed there was a pick-up in their incomes from 2012 onwards, which had not shown up yet in official data yet.

More equal countries had fewer social problems and higher economic growth. The effects permeated all levels of society, not just those at the top or bottom, and in more equal countries the ability of the very rich to influence laws and policies was constrained.

Asked to name the biggest cause of increased inequality, Mr Rashbrooke cited the early 1990s benefit cuts. However, they were unlikely to be reversed, because public opinion weighed against giving beneficiaries more money. Likewise, reversing the big 1980s tax cuts on the wealthy depended on what was ''feasible'' politically, in terms of public opinion. Constraining the ability to collectively bargain for higher wages had also increased inequality.

Mr Rashbrooke emphasised he was not advocating particular solutions. Declining to state a political party preference, he said he was a journalist, but also disclosed he was working for the Green Party on a short-term basis to help formulate its inequality election policy.

He would also work for the National Party if requested. It was wrong to assume income inequality could not fall under National, he said, pointing to the Keith Holyoake era when top earners saw their share of income fall.

Some ideas about countering inequality cut across the political spectrum. An example was the universal basic income idea, which was supported by the late right-wing economist Milton Friedman, but also by many people on the left. A universal income would give everyone in society a basic wage, unaffected by other income streams.