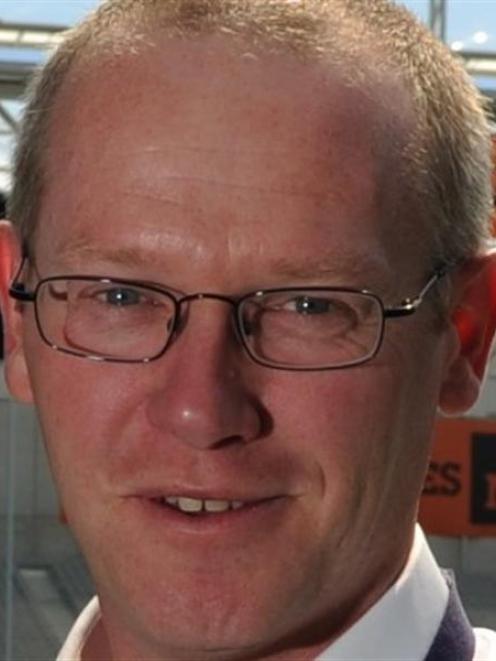 Darren Burden.
The man running Dunedin's Forsyth Barr Stadium is joining the opposition in Christchurch, it has been confirmed.

Mr Burden, who has been in the role just over a year, has been recruited by Christchurch City Council's venue management company, Vbase.

Vbase is responsible for CBS Canterbury Arena, the Air Force Museum and AMI Stadium, and, if plans are confirmed, could eventually add a new roofed stadium to its portfolio.

He is expected to work out a notice period of up to six months before departing.

Mr Burden was not commenting yesterday.

Mr Burden's decision was ''disappointing'' given he, together with the board, had been moving the company in the right direction, Sir John said.

However, Sir John said he could not do ''anything but accept it''.

''There's no use getting uptight about these things. He's made a decision. We've got to accept it, because he's entitled to under his contract.

Mr Burden, who replaced departing DVML chief executive David Davies in September last year, had been involved in the stadium project since its inception.

He had earlier worked for the Carisbrook Stadium Trust, and later as DVML's operations director, until he replaced Mr Davies.

Sir John said he did not know what Mr Burden's new Christchurch role would entail, or what the future held for Christchurch's planned roofed stadium under the city's new mayor, Lianne Dalziel.

It was a ''reasonable supposition'' to assume Mr Burden's years of experience with Dunedin's stadium would help progress any new roofed stadium in Christchurch, he said.

However, any intellectual property should remain with the Dunedin City Council, as the stadium company's shareholder, Sir John said.

''Certainly, he has a lot of knowledge because he's been involved from the beginning of this project, firstly with the Carisbrook Stadium Trust and then with us.

''But I don't think that there is anything particularly unique within the building that he would know that would not be available on the open market.''

Sir John informed staff and key stakeholders of Mr Burden's plans yesterday, and in his statement, thanked Mr Burden for his efforts.

Asked if it was a blow to DVML and the stadium, Sir John told the ODT it was just ''like anything else that happens - you've just got to deal with it''.

''We've got very committed staff at the next level down in management, and right through the organisation.

He did not believe the loss of two chief executives in quick succession pointed to problems within DVML, or between the company, its board and the council.

As he left, Mr Davies had expressed frustration at some aspects of the way the stadium project had been handled, although he insisted that was not the reason for his departure after less than three years in the role.

Sir John said Mr Burden had not expressed ''any frustration'' to the board, and both he and Mr Davies had cited family reasons for their moves.

''You would have to ask the people concerned if that's the real reason. I have no personal reason to doubt it, in either case.

''We've never had any frustration expressed by Darren whatsoever. We've worked very closely with him and it's been a good working relationship. Which is why, as I say, it came somewhat out of the blue.''

A recruitment process had already begun, although a decision on how wide to cast the net was yet to be made, he said.

Mr Burden, originally from England, was employed on a five-year contract that required six months' notice of any departure.

Sir John said he would be free to leave earlier, if a replacement could be found who was available to start sooner.

''When this type of thing occurs it's better to move sooner, rather than later. We would be looking to find a replacement as quickly as is practicable.''

Sir John said yesterday it was too soon to speculate on whether Mr Burden would lose any of his at-risk salary.

That decision would be made by the board only after Mr Burden's replacement was confirmed, he said.