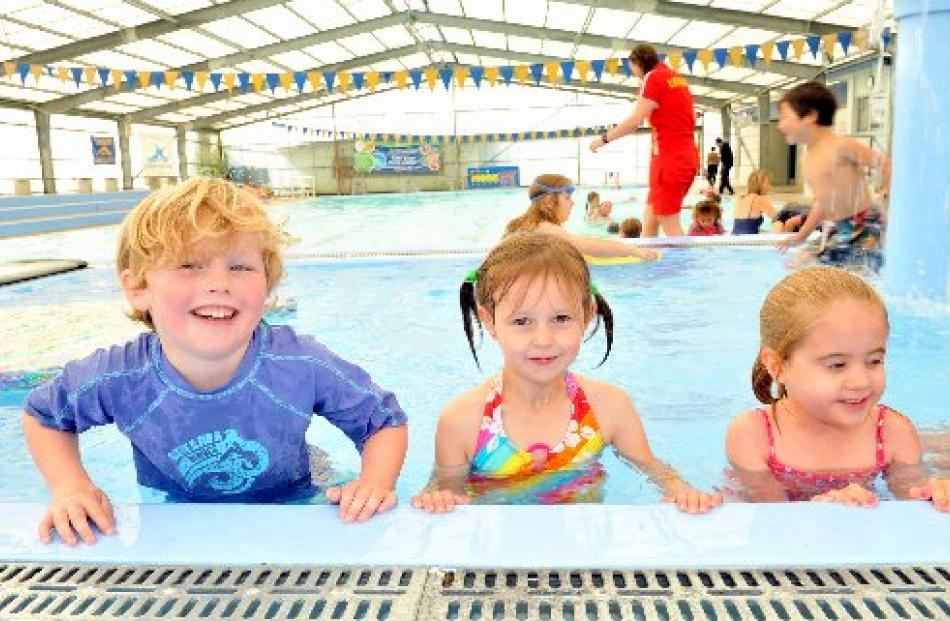 Concord School pupils (from left) Quinn Owen, Ariah Berryman and Savannah Erey (all 5) have fun on the last day of the season at Mosgiel Pool on Tuesday last week. Photo: Linda Robertson

The Taieri Communities Facilities Trust hopes the wider Dunedin community will support its push for a new aquatics centre in Mosgiel.

The trust hopes Dunedin residents will join with the Taieri and make submissions in favour of the $15 million pool during consultation on the Dunedin City Council's draft long-term plan. The project is included for consultation as an unfunded item.

''Now is the submission window where people have their last chance to have their say on the project,'' trust spokesman Geoff Woodcock said.

The council plan contained an estimated cost for the pool and operating costs the trust felt were incorrect and misleading. The council estimates

the pool will cost $18.2 million, with an ongoing yearly shortfall of $2.3 million to run a four-pool complex.

Mr Woodcock said the trust had not been granted access to the council's calculations, but its own experts had found the complex would cost $14.4 million to build and would ''almost'' break even annually.

He wanted Dunedin's population to be aware of the variances, as he feared the council's calculations might paint the proposed complex in a poor light.

''It's our last chance to educate the public on the necessity of the pool,'' he said.

Trust design team leader David Murphy said people on the Taieri and in Dunedin were ''crying out to get their kids into swimming lessons''.

Mr Woodcock added: ''It's not only families that are struggling to get their kids into lessons - it's schools. Whole schools can't get space for swimming lessons.''

The trust's proposed four-pool complex would include a hydrotherapy pool - a ''revenue generator'' for the complex and important for an ageing population, he said.

''A lot of elderly people in Mosgiel are bound in Mosgiel because they don't have a driver's licence, so this is within reach for them.''

As the Dunedin Physio Pool's future was somewhat unclear, a hydrotherapy pool in Mosgiel was important, Mr Woodcock said. Submissions on the council's long-term plan close on April 28.