Chance stadium crowd will get to roar again 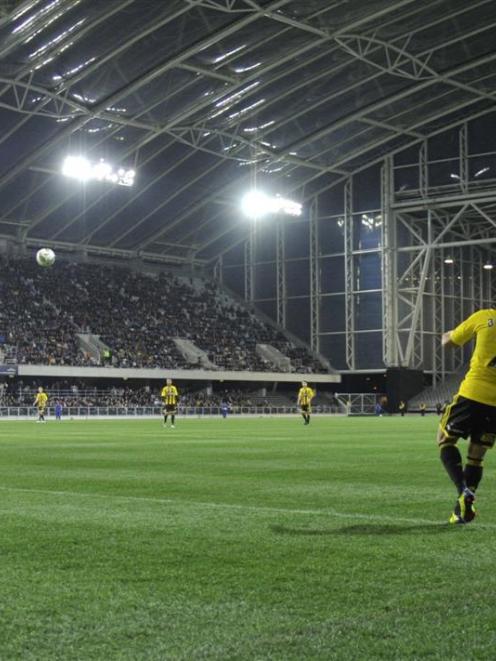 Part of the 15,000 crowd watches Leo Bertos taking a corner for the Wellington Phoenix against the Brisbane Roar at the Forsyth Barr Stadium on Saturday night. Photo by Gerard O'Brien.
Football fever could return to Dunedin as soon as December, with the city in line to host a full A-League match.

Coaches and players alike were singing the praises of the new Forsyth Barr Stadium after 15,037 raucous fans turned out to watch the Wellington Phoenix play the Brisbane Roar in a pre-season game on Saturday night.

It finished in a rough 5-1 loss for the Phoenix, but coach Ricki Herbert had only good things to say about the new venue.

"The atmosphere you can create within the dome is electric.

"It's a great surface. Everyone has done a top job. If there is an opportunity to come back, I'm sure this venue would be looked at favourably."

Herbert, also the All Whites coach, said he would be "very keen" to see the national side play in the new stadium as well.

The Phoenix and the Roar are scheduled to meet in a December 14 game as part of the designated "regional round", used by the A-League to promote the sport in different cities.

It is believed the Australian venue in consideration is the 12,000-seat Mackay Stadium, but the success of Saturday's game could make Dunedin a front-runner.

"I think both teams will be reporting back to the league that this is a destination other clubs should make for," Dunedin Venues Management Ltd chief executive David Davies said yesterday.

"We were really pleased with the number of people that came. The reaction of both teams to the venue and to the experience of being in the city was also very positive."

Davies said DVML had been talking to A-League clubs for months with an eye on the gaps in the schedule.

"We will try to get another game in as soon as possible. We're also talking to New Zealand's governing body to encourage them to bring international games here. I think we've got a pretty strong argument."

Swathes of gold shirts and flags, chants and a large, feet-stomping block of Yellow Fever fans in the West Stand provided a vibrant atmosphere under the roof on Saturday.

There were even a few Mexican waves, one of which caught Phoenix captain Andrew Durante off guard, admitting he " accidentally got caught watching it for a while."

"It's a fantastic stadium. The surface was brilliant and the crowd was fantastic."