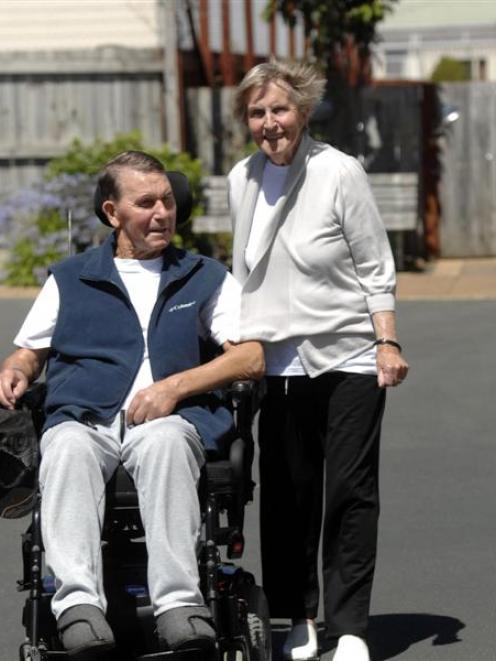 However, after an eight-year journey of rehabilitation, the couple's fierce determination, indefatigable spirit, and love for one another has remained strong and true.

The Turners are staunch advocates and supporters of the Neurological Foundation's public campaign to fundraise $3 million to establish a chair of neurosurgery in Dunedin, after experiencing first-hand the benefits of a Dunedin-based service.

Mr Turner is confined to a wheelchair and paralysed from the chest down, but plans to participate in the Brains on Bikes event being held this BikeWise Month to raise funds for a chair of neurosurgery.

Mrs Turner plans to support her husband on his "rides" and the pair will also participate in a Masters Games 5km fun event, alongside 12 other people in wheelchairs, to promote and raise awareness about multiple sclerosis for MS Otago.

"We're prepared to do anything to support the campaign. We've had our share of help and are grateful for everything that has been done for us. Everyone needs to get in behind neurosurgery at the hospital," she said.

The Turners are a resilient pair. Mr Turner (79) is a former shearer from Invercargill, who worked on shearing gangs around the South Island, before he settled in Palmerston and found work as a cemetery sexton.

He met Mrs Turner (76) about three years before a sudden diagnosis of a ping-pong ball sized tumour in his brain stem brought the couple into contact with Dunedin's neurosurgery unit.

Mr Turner remembers little of the original ordeal, which left him facing a long road to recovery and a difficult rehabilitation.

He said he had always suffered from painful headaches and developed a limp. However, the persistent symptoms gave no indication of what was to follow.

Mrs Turner said her husband suddenly collapsed one day and could not figure out what was wrong.

He picked himself up and told his wife he needed to go to hospital, and then drove to Dunedin.

Upon arrival, doctors checked Mr Turner in for a CT scan, which revealed he had a large malignant tumour growing in his brain stem.

He was forbidden from leaving the hospital, given an immediate prescription of steroids to try to reduce the swelling in his brain, and then prepared for surgery.

While surgeons managed to remove most of the rare and malignant "ependymoma" tumour, it had grown to such a size where it had encroached into an inoperable part of Mr Turner's brain stem.

After his brain surgery, the former shearing strongman was left paralysed from the chest down, in a wheelchair, and with an arduous rehabilitation schedule ahead of him, which included a battle with meningitis.

The attitude, fierce support, and determination of Mrs Turner has been crucial to Mr Turner as the couple strove together to reassert his independence throughout the rehabilitation process.

"It is a journey that can happen together if you try," Mrs Turner said.

A relentlessly determined outlook and an attitude that left no room for self-pity were key to the process, she said.

"There was never any 'poor Ted'. I wouldn't allow it. When I brought him home, it was a very poor outlook and we knew nothing about neurosurgery. We've kept it positive and have pushed on and on," she said.

The situation brought the pair closer - they were both widows after their former married partners died - and they were married a couple of years after Mr Turner's brain operation.

The marriage was conducted by a celebrant while Mr Turner was in hospital, and they celebrated their honeymoon in the ward "side-by-side" on a hospital bed.

"I remember all that part very well," Mr Turner said.

The Turners said they had always had a close network of support from a core group of Dunedin-based health professionals, who have advised and assisted with Mr Turner's rehabilitation.

"It has been an epic journey, but we are nothing unique. We're down to earth and we just get on with it. Ted would have done exactly the same for me," Mrs Turner said.

The couple have 11 children from their previous marriages; Mr Turner is a father of eight.

The pair moved to St Kilda about three months ago to be closer to healthcare, after Mrs Turner had previously looked after her husband in Palmerston.

Mr Turner said he missed his regular journeys in his electric wheelchair through the streets of the town and was looking forward to being involved with the Bike for Brains event.