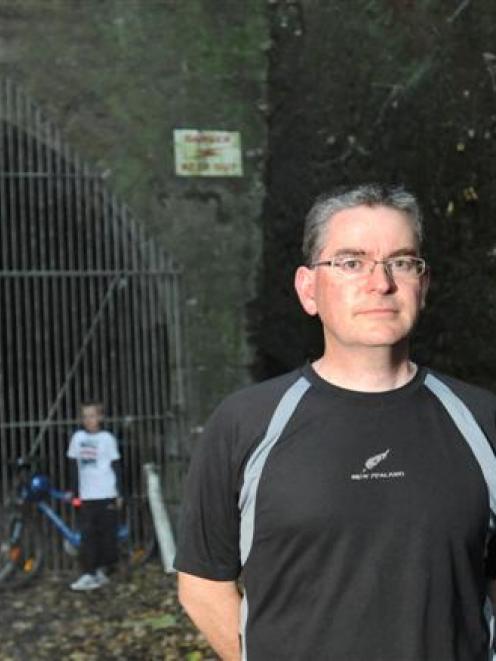 Dunedin Tunnels Trail Trust members Gerard Hyland and Greg Brenssell believe opening the old rail tunnel through the Caversham Hill to cyclists is a better option than creating a new cycleway over the hill. Also pictured, Grace Brenssell (7) and Joe Brenssell (10). Photo by Peter McIntosh.
A plan by the New Zealand Transport Agency to create a cycleway over the Caversham Hill is not the best option for cyclists, according to the group pushing to be able to use a former rail tunnel through the hill.

Dunedin Tunnels Trail Trust spokesman Gerard Hyland said it was good to see the $30 million Caversham highway upgrade going ahead, but it was "disappointing" the agency was "unable to see the advantages of using the old Caversham tunnel as a cycleway".

The upgrade from Andersons Bay Rd to Lookout Point includes a cycleway up the northern side of the Caversham hill.

Mr Hyland said using the tunnel alternative would remove a "large amount of non-vehicular traffic from a busy and potentially dangerous section of State Highway 1".

"In addition to creating a safer route for cyclists travelling between Caversham and Green Island ... it shortens the trip and changes it from a vertical climb of 120m - close to a 1 in 10 gradient - to a gentle rail-trail gradient."

A cycleway over the Caversham hill would be suitable for regular cyclists, "however, a cycleway through the tunnel could be used by a far larger group of people".

Mr Hyland said the agency had agreed to leave the Caversham tunnel mouth unblocked when it upgraded the highway.

He considered developing a cycleway through the Caversham tunnel and through a second tunnel at Wingatui fitted into the agency's safer journeys strategy, announced last year, to lift bicycle use and cut cycling fatalities.

The Dunedin City Council is planning a feasibility study into using the tunnels, but will also look at other options for a cycleway south of the city.

Acting general manager strategy and development Nicola Johnston said the terms of reference for the study had been prepared.

They noted the "necessity of connecting to the cycleway plans for Caversham highway improvements".

"I understand [the agency is] to incorporate the cycleway into the Caversham highway improvements.

"Therefore, the study will be important to the final highway design."

The council is waiting for agency approval for funding of the study and expects a decision within two weeks.

The study is due to be completed before the end of June 2010.