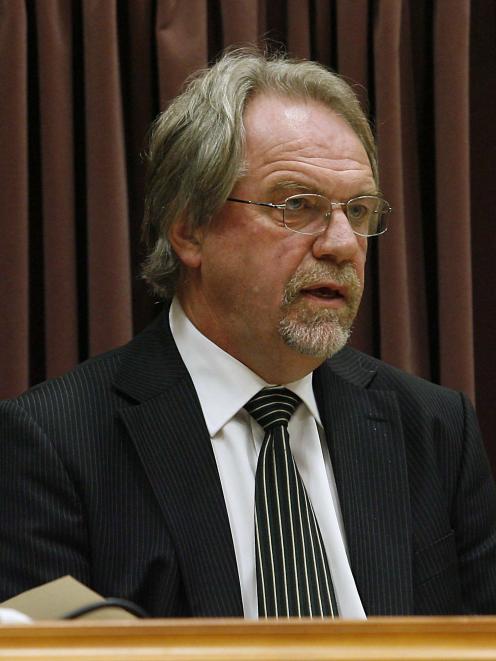 Dr Philip Brinded.
A forensic psychiatrist who examined murder accused David Bain told the High Court at Christchurch today that his diagnosis did not assist in proving guilt or innocence.

Dr Philip Brinded told the trial that Bain -- on trial charged with the murder of the other five members of his family -- -- suffered from acute stress reaction which over time developed into post traumatic stress disorder.

He said he was asked to examine Bain after the killings to ascertain whether he was suffering from a mental disorder, and, if so, whether it was relevant for a defence of insanity.

Dr Brinded was giving evidence in the trial before Justice Graham Panckhurst and a jury. Bain denies charges of murdering his parents and three siblings at their family home in Every Street, Dunedin, in June 1994.

He said he met Bain when he was on remand in Dunedin prison in early July 1994.

Dr Brinded said he had two lengthy interviews with him, and Bain was extremely distressed at times, and was quite difficult to interview.

He had no previous signs of a mental disorder, or a personality disorder, so there was nothing to suggest that leading up to the killings he was suffering from a mental illness, he said.

Bain would discuss past history, but when talking about the loss of his family and what he remembered on that day, he became distressed and at times incoherent.

He was suffering from acute stress reaction, which over time developed into post traumatic stress disorder, Dr Brinded said.

The disorder was consistent with emotional detachment, failing to display normal emotional responses and then becoming extremely distressed and unable to function.

He would go to some lengths to avoid talking about the events, or beginning to describe them.

In 1996 Bain was in Paparua Prison and asked Dr Brinded to visit him.

Dr Brinded said he found him distressed, with post traumatic stress disorder and depression. He was having difficulty coping with the deaths of his family and prison life.

He became his treating psychiatrist and saw him every two to three weeks for about three years, then four to six weeks for the next two years. From 2001 he had been visiting him two to three times a year.

He said that this was an unusual situation as he was an expert witness for the first trial, but that he had now become Bain's treating psychiatrist.

He said Bain had waived his medical privilege so that he could give his evidence at the present trial.

When cross-examined by crown prosecutor Kieran Raftery, Dr Brinded said that his diagnosis did not assist in proving guilt or innocence.

Joanna Dunn told the court her family had a visit from the Bain family in 1978.

When she and Margaret Bain were on their own, Margaret told her that she was worried about her husband Robin.

She said his depression was so extensive and was hard to understand, Mrs Dunn said.

The defence has argued that Robin Bain shot dead his wife, two daughter and younger son Stephen before turning the rifle on himself.

Dr Harold Love was a director of the Otago University's classic department productions.

He told the court that on the Sunday before the killings David Bain attended a rehearsal for a play he was directing.

He said Bain was relaxed, convivial and horsing about with the other members of the chorus.

Ambulance officer Robert Cooper told the court that when he went to the house in Every Street after the killings, David Bain was sitting at the foot of his bed with a blanket around him. Mr Cooper said Bain was in a very distressed state.

He was not reacting to anything outside of himself, whimpering, crying and shaking.

The shaking was the shaking of someone who was emotionally upset, he said.

Earlier in the day, a man who stayed in a boarding house in Dunedin where Laniet Bain was living, said she told him that her father was "doing things not appropriate - touching her in ways he shouldn't",

David Bain, Laniet's brother, is being tried on charges of murdering five members of his family at their home in Every Street, Dunedin, in June 1994.

The trial is before Justice Graham Panckhurst and a jury in the High Court at Christchurch.

The man, who has name suppression, said Laniet's cellphone would go, she would phone a taxi, and then get changed to go out, sometimes once or twice a night. He worked out that she had some sort of escort type job.

One night near the end of April, or early May 1994, Laniet asked to talk to him privately.

"She seemed concerned about what I thought about what she was doing," he said.

She told him she was a prostitute, and she was upset about it. She said she had a pimp who was threatening to expose her to her parents because she was trying to get away from that type of work.

She told him that the situation at home wasn't very good. She said her brother David was the favourite, and it wasn't fair the way she was being treated.

When she said her father was abusing her, the man told her to get her sister, Arawa, and go and tell her mother.

She was worried the same thing may happen or was happening to Arawa, and she wanted to get her out of it, the man told the court.

She was fearful of going near her house and was terrified of her father.

"When the whole thing happened, I was very surprised she was at the house. It was the last place in the world she would want to be," he said.