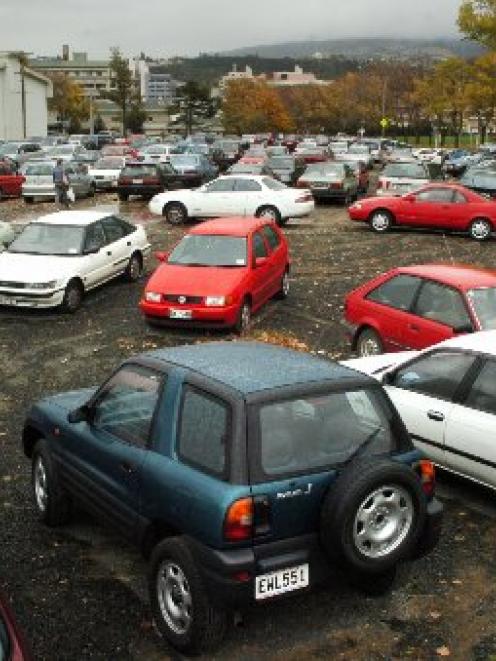 Cars parked on the stadium site in Awatea St last week. Photo ODT files
Construction of the $198 million Otago stadium could be just the beginning of development around Dunedin's Awatea St, the Carisbrook Stadium Trust believes.

CST chairman Malcolm Farry told the Otago Daily Times there had been a "huge upsurge" in interest regarding the potential for further development around the stadium site, following confirmation the stadium was to proceed.

Contractors were expected to move on to the site this week to begin preparations for full-scale stadium construction, following the dismissal of the Stop the Stadium injunction application and last Monday's signing of a construction contract with Hawkins Construction.

The stadium was scheduled for completion in July 2011, but Mr Farry said the project's confirmation meant talk in some circles was now turning to the potential for other developments.

He believed the site would become "very attractive" for developers in the years immediately after the stadium's completion, with the potential for office space, accommodation and even health and medical centres at the site.

Talks had been held on and off over the past two years, but the stadium's confirmation meant some ideas were "starting to take shape", he said.

"There has been, and continues to be, some very, very exciting discussions around the stadium.

They are heating up as the stadium is now going to be built.

The potential for this blows my mind and it will blow the minds of the community."

Any projects would be in addition to the University of Otago's $50 million plan for an L-shaped development, to house Student Health, the Unipol gymnasium and the foundation studies department, plus possibly child-care facilities, research spaces and a cafe.

The development, on land beside the stadium, may be built over two stages to avoid construction during the Rugby World Cup 2011.

Mr Farry declined to reveal what else could follow, and would not comment when asked who was considering projects, because discussions were at an early stage.

However, as an example, the stadium's planned 336-space car park had the potential for further development, with a car-parking building or office block to make use of the "airspace".

"I would imagine the utilisation of that airspace will become very attractive within the early years of this facility [stadium] opening," he said.